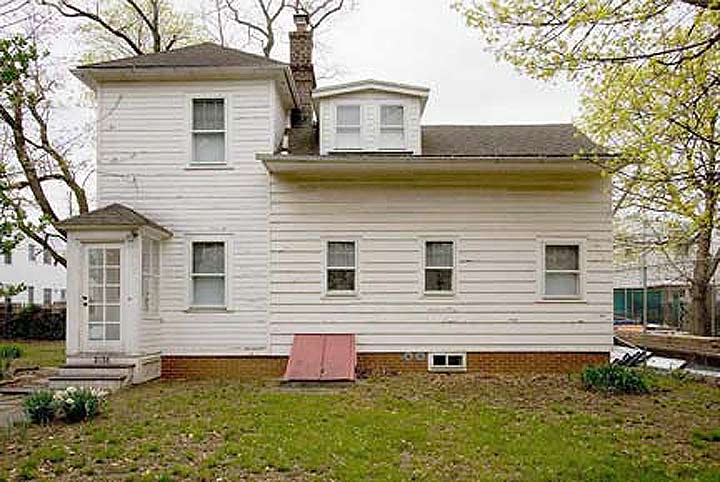 The Fatal Glass of Beer Mrs Hubbard was poisoned by a fatal glass of beer in this house. Samuel Hubbard House, Gravesend http://forgotten-ny.com/2014/03/the-names-of-the-neighborhoods-of-brooklyn/

Today we visit the aptly named Brooklyn neighborhood of Gravesend, where a railroad flagman has an unexpected encounter with a dead woman.

The Awful Apparition that Startled a Gravesender

The Spirit of Mrs. Maria L. Hubbard, the Poisoned Woman, Appears to a Flagman on the P.P. and C.I. Railroad

A Strange Conversation with One from Another World.

Various Theories of the Mysterious Occurrence.

The usually placid town of Gravesend is in a ferment of excitement in consequence of an apparition sufficient to horrify the boldest and hardiest of men. The mysterious and sensational occurrence has for several days been the subject of much discussion and speculation.

On the night of Friday last, shortly after 10 o’clock, Bartlett McGettrick, a flagman employed by the Prospect Park and Coney Island Railroad Company at the crossing near the Gravesend Town Hall, was startled by hearing his name called by a female voice. He started in the direction whence the sound proceeded. It led him toward the residence of the late Mrs. Maria L. Hubbard, how was mysteriously poisoned with strychnine several months ago. Only the stars were visible in the dark sky at the time; the place was lonely and deserted, and the flagman made his way cautiously over the railroad track. The house where Mrs. Hubbard lived and died is a neat frame cottage, two stories in height, with a deep porch and broad piazza. Tree embowered and surrounded by clinging vines, shooting creepers and rustic flower beds, it is altogether

As the watchman approached the house he discovered in the dim starlight a female form on the piazza. Glancing closely at the woman the horrified watchman discovered that the face and figure were those of Mrs. Maria L. Hubbard. Form and feature were both familiar to the trembling McGettrick; he had known her in life and had followed her body to the grave in the little village churchyard. The house of the deceased woman being near the crossing where McGettrick is stationed he had frequent opportunities to converse with her, and it is supposed that she in some measure confided to him the story of her domestic troubles.

When the flagman saw Mrs. Hubbard’s apparition he was frightened almost out of his wits. He is a devout member of the Roman Catholic Church and he fell upon his knees, crossed himself and uttered a hasty prayer. According to his own story Mrs. Hubbard called him again when he arose from the sidewalk, and with

Beckoned him toward her. With ashen lips and trembling knees, he obeyed the ghostly summons. Getting near the ghost, he saw that she wore the calico wrapper that Mrs. Hubbard was in the habit of using every morning. There was and is no doubt in the mind of the flagman that the poisoned woman’s spirit was before him. She accosted him in a hollow but kindly voice. McGettrick was so smitten with fear that he hardly dared to look at the ghost. He says that a supernatural light gleamed from her eyes and that her face was as pale as death, while the habiliments of the grave were near her on the piazza, as though she had just escaped from the sepulchre.

McGettrick says that Mrs. Hubbard inquired about his health and asked him some questions concerning the death of a dog a few weeks ago. She is believed to have intimated that the dog was poisoned. She had some further conversation with the flagman, the details of which he absolutely refuses to divulge. He says that he will tell the story at the proper time, and that when he does divulge the secrets of the conversations

While McGettrick was conversing with Mrs. Hubbard, ex-Justice of the Session Andrew McKibben, and a barber named Sauer, who lives near by, were passing the house. They saw the ghost of Mrs. Hubbard and heard part of the conversation. Suddenly, as they drew nearer, the apparition seemed alarmed, resumed the grave clothes and vanished in a cloud of blue smoke. This is the story told by McGettrick, and is corroborated by the testimony of McKibben and Sauer.

Some of the Gravesend people are inclined to believe that there was something supernatural and portentous in the apparition of Mrs. Hubbard, and that new developments may possibly occur in the case. McGettrick, as might be expected, was greatly alarmed. He has not the least doubt that the ghost was that of Mrs. Hubbard. Early yesterday morning he arose and went to church. He heard mass, confessed his sins, and obtained some holy water. He is in great trepidation lest the spectre return any  night and carry him off.

The Hubbard poisoning case caused quite the sensation. Mrs Samuel D. Hubbard was about 50 years of age, some ten years younger than her husband and independently wealthy as a result of “three or four matrimonial experiences, some of which were far from happy,” sniped The Brooklyn Daily Eagle [20 June 1878 p 4] .  She was married when she came to live with Hubbard as his housekeeper “although it was whispered that her position was in no way removed from that of mistress except in name.” On the death of her husband “she was married in hot haste” to Mr. Hubbard.

On the morning of her death, 19 June 1878, she complained of the heat to her niece Elizabeth Lusk, who lived with the couple, and asked Elizabeth to fetch from the cellar a half-bottle of lager which was left over from her dinner the night before.  She shook up the beer “to make it lively,” poured it into a tumbler and took a couple of swallows.  She complained that it tasted queer and offered the tumbler to Elizabeth who later said that she shook her head and said that she had never in her life drunk lager beer. At that Mrs. Hubbard became ill and said, “O, my God! My God! I’m poisoned.” Her muscles contracted, her limbs became rigid and she fell into convulsions, although her mind was clear enough to say over and over “I have been poisoned” and accuse her husband’s nephew, local shoemaker Jacobus Stryker, of the crime. She died an hour and half after she drank the beer. Her husband, who seemed unconcerned, went for the doctor, but reported that he could not find him. When the doctor finally arrived, he took possession of the bottle and the tumbler and telegraphed for the Coroner. Analysis showed strychnine in the remaining beer and in Mrs. Hubbard’s stomach, although I would have thought strychnine would not have taken so long to kill.

After this, things got even murkier. Stryker was detained by the police, as was Mr. Hubbard, who admitted having purchased strychnine to kill rats and who had spent about ten minutes in the cellar before Elizabeth came down to fetch the beer. Stryker seemed stunned by the affair; he had not set foot in the house for months due to Mrs. Hubbard taking exception to something he said about family money. Then Hubbard went “temporarily insane.” The Coroner’s jury issued a verdict that Mrs. Hubbard had been poisoned with strychnine by her husband, but in July the Grand Jury failed to indict him, citing insufficient evidence. (It was noted in the papers that the Coroner found difficulty in getting a jury “the members of which were not in some way related to the Hubbard family, as every person in  Gravesend has a wide circle of relatives.”)

No longer insane, or feigning it, Hubbard seemed much elated and complained bitterly to the newspapers of his wife’s abusive treatment of him.  Although  it was reported that she was generous about giving him money for farm expenses, their violent quarrels were apparently well-known in the neighborhood.

Elizabeth Lusk, since she was only a relative by marriage and could not inherit unless specifically written into a will, was apparently never considered a serious suspect. She testified that she had come to reside in the household in February of 1878 as the companion of Mrs. Hubbard. She was to be paid $5 a month. She stated that she had not received any money, but had been given a dress. I can find no record of her after her testimony given in 1878.

How suggestive and intriguing are the details of the calico wrapper, the hasty resumption of the grave-clothes (was the shroud also identified as the one worn by the dead women?) and the cloud of blue smoke!  If only McGettrick had confided the sensational details of his conversation with the late Mrs. Hubbard…  Was the dog poisoned as a test run for the marital murder?  Did Elizabeth Lusk have anything to do with the poison in the bottle–had she been promised money or marriage  in exchange for her help?

Mrs. Hubbard left multiple wills, which took years and many legal challenges to sort out. The best I can find, a court ruled in favor of a will benefiting Elizabeth Lusk’s father. I wonder if Miss Lusk knew about that will? Samuel Hubbard lived until 1909, when he was laid to rest in Brooklyn’s fashionable Green-Wood Cemetery; Mrs. Hubbard had asked to be buried there, but her request was denied by her widower.

Often, in sensational murder cases, the victim’s ghost returns to try to obtain justice.  For example, in the wake of Pearl Bryan’s decapitation, a flood of psychics, mediums, and ghost-seers came forward to claim that they had made contact with the dead woman, knew where her head was to be found or had seen a vision of the murder. [See my book The Headless Horror for a chapter on the subject.] Nearly all the information proved wrong or could easily have been derived from newspaper reports. Sadly, McGettrick’s vision, even corroborated by Justice McKibben, seems to fall into the same category of fruitless communications from the Spirit World. No one was ever convicted of Mrs. Hubbard’s death.