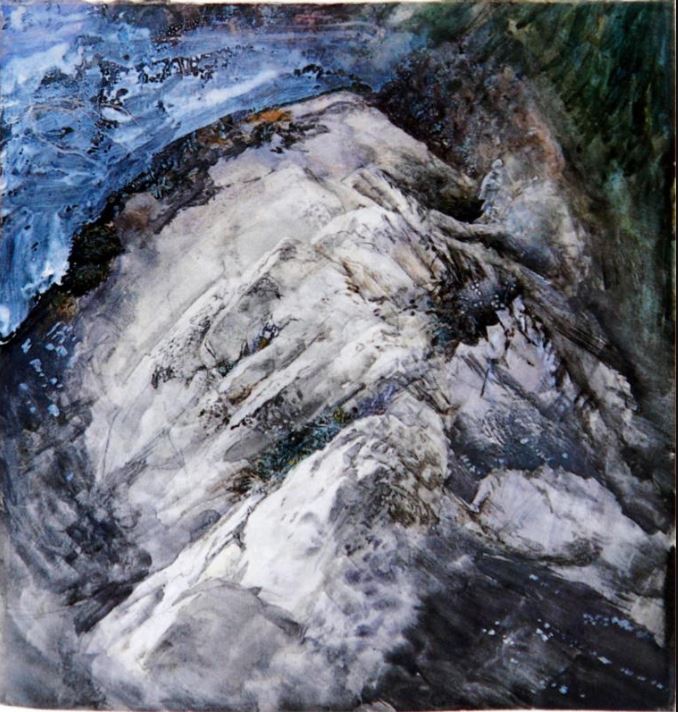 Only Holes, Rocks and Vegetation at Chamonix, John Ruskin 1854

Short, sweet, and Swiss today, from William James Stillman, American author, journalist, artist, diplomat—well, let’s just leave it at “Renaissance Man”—and friend of John Ruskin. Stillman went to Switzerland with Ruskin and it was here that he heard this story:

I was very much interested in [Ruskin’s] old guide, [Joseph] Coutet, with whom I had many climbs. He liked to go with me, he said, because I was very sure-footed and could go wherever he did. He was a famous crystal-hunter, and many of the rarest specimens in the museum of Geneva were of his finding. There was one locality of which only he knew, where the rock was pitted with small turquoises like a plum pudding, and I begged him to tell me where it was. There is a superstition amongst the crystal-hunters that to tell where the crystals are found brings bad luck, and he would never tell me in so many words; but one day, after my importunity, I saw him leveling his alpenstock on the ground in a very curious way, sighting along it and correcting the direction, and when he had finished he said, as he walked past me, “Look where it points,” and went away. It was pointing to a stratum halfway up to the summit of one of the aiguilles to the west of the Mer de Glace, a chamois climb. He told me later that he found the crystals in the couloir that brought them down from that stratum. A dear old man was Coutet, and fully deserving the affection and confidence of Ruskin. Connected with him was a story which Ruskin told me of a locality in the valley of Chamounix, [sic] of which the guides had told him, haunted by a ghost which could only be seen by children. It was a figure of a woman who raked the dead leaves, and when she looked up at them the children said they only saw a skull in place of a face. Ruskin sent to a neighboring valley for a child who could know nothing of the legend, and went with him to a locality which the ghost was reported to haunt. Arrived there, he said to the boy, “What a lonely place! There is nobody here but ourselves.” “Yes, there is,” said the child, “there is a woman there raking the leaves,” pointing in a certain direction. “Let us go nearer to her,” said Ruskin, and they walked that way, when the boy stopped and said that he did not want to go nearer, for the woman looked up, and he said that she had no eyes in her head, “only holes.”

There is an entire M.R. James story in those two words…

Other Swiss or skull-faced ghosts? My ancestors came from a particularly haunted canton of Switzerland with a good deal of ghostlore, but, alas, much of it was stifled when they arrived in this country and decided to be all rational and American. chriswoodyard8 AT gmail.com