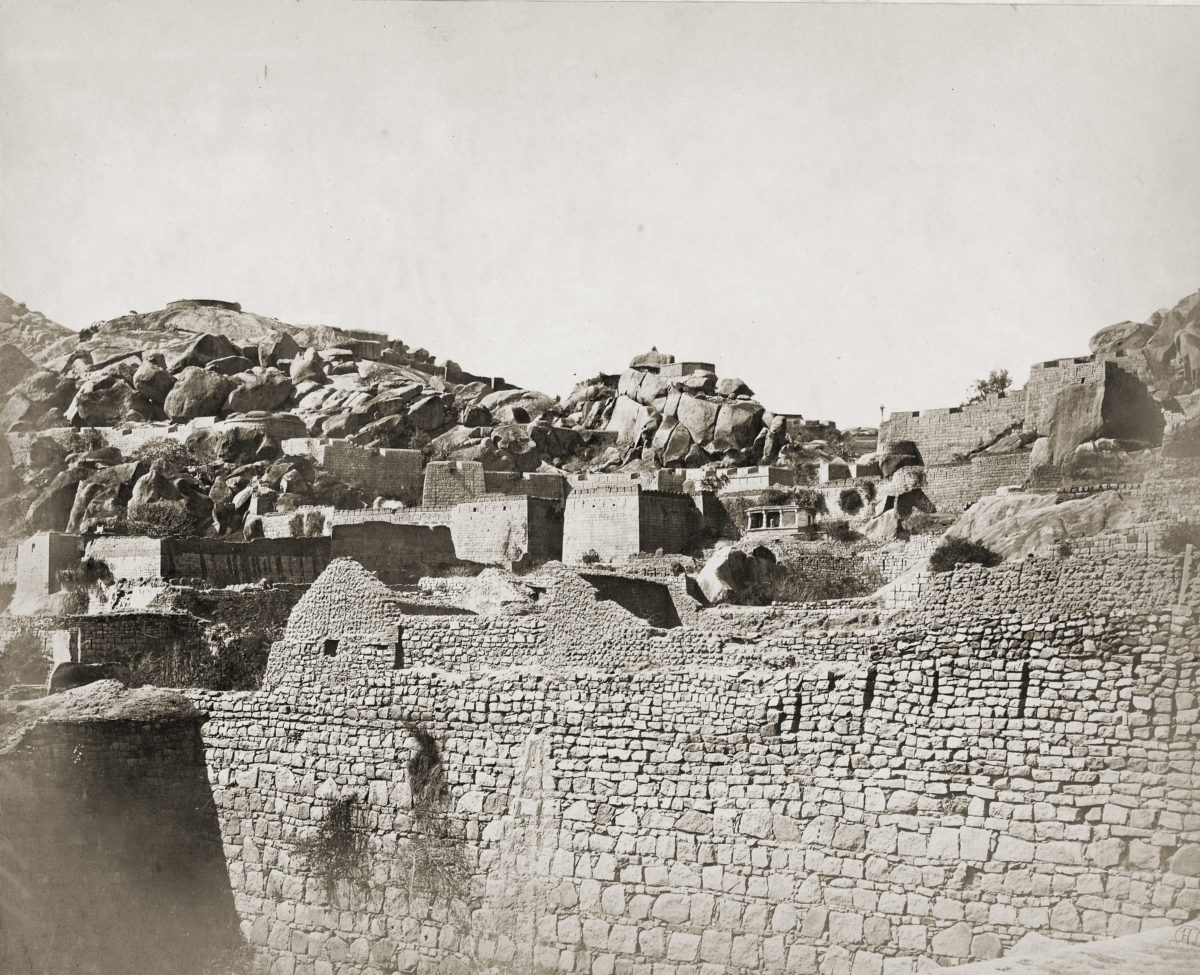 The Women on the Wall, Ramparts of the Chitradurga Fort, 1868 https://en.wikipedia.org/wiki/Chitradurga_Fort#/media/File:Ramparts_of_the_Fort,_Chitradurga.jpg

I don’t know about you, but I’ve reached critical mass with demonic infestations, haunted dolls, and scratched fannies. You can only study the cliches of crockery-hurling polts, ladies in white, and pubs haunted by former owners dubbed “George” for so long before you are ready to hurl the laptop across the room. And don’t get me started on little girl ghosts named “Emily.” I want exotic locations, new faceless faces, rare species of spooks!

It was in this discontented spirit that I discovered this story from India, replete with atmosphere and a trio of malign ghosts.

The whole history of India teems with tragedies….Is it to be wondered at that such tragedies have filled the country with ghosts, or, at any rate, a fixed belief in them? For superstition is rife everywhere, but more particularly among the hill-men, from whom I have heard the most extraordinary ghost stories. True, the majority of them are legends, but the present hill-man seldom ventures out at night for fear of meeting these evil spirits, and nothing would induce him to visit a place with an evil reputation after dark; so legends they remain….

I was always an interested listener to these stories, although sceptical as to the truth of any of them, but I must admit that in later years I got rather a severe shock in Southern India, and as others were with me and witnessed the same phenomenon, I can scarcely attribute it to mental aberration. It occurred while I was on a shooting expedition with my two friends, Thomas of the Police, and Wilson of the Forestry Department, in the lower Ghauts. The monsoon was over-due, and judging by the great banks of cloud that were being driven across the sky, might break at any time. So we had decided to have our last shoot in a valley away beyond the old ruins of Chittledroog fort. [Chitradurga.] Unfortunately, that day a wounded panther badly mauled one of our native beaters, and instead of getting home by five o’clock, as was our usual custom, owing to the natives’ fear of being out after dark, it was nearly eleven when we reached the crest of the hill where the tracks divided. One of these tracks led straight to the old fort, along under its outer wall, and then almost direct to our home, which it would take us about an hour to reach. The other joined the main road and would take us double the time. Both Wilson and Thomas wanted to take the short cut, but the natives absolutely refused to come that way, giving as their reason, “that the devils were sure to be on the walls of the old fort this moon,” and neither threats nor rewards would induce them to change their minds. So reluctantly we decided to separate, and leaving them to carry home their wounded comrade by the main road, we took the short cut. Although not superstitious, I was never very keen on tempting Providence, and had I been consulted I should have preferred keeping to the main road, for the old fort had such an evil reputation among the natives that few of them would approach it even in the daytime. Ever since Hyder, the King of the Mahrattas, had captured it in 1772 and put the garrison to such fiendish torture and death, it had been a black spot on the countryside. However, there was no superstition about either Thomas or Wilson, so whatever I thought, I felt obliged to follow.

It was a wild night, and although the moon was nearly full, the great banks of cloud being driven across it obscured it for four minutes out of every five; and as we stumbled along the half-hidden track towards the fort I began to wish more and more that we had kept to the high road. Presently we emerged on to more rocky and less wooded land, and in a short burst of moonlight saw the old battlements in front of us. The path now broadened considerably and would have been easy going but for the deep shadow of the wall which towered twenty feet above us. Thomas, who knew the path pretty well, was leading, and Wilson and I keeping in close touch behind him. We had reached about the middle of the fort, when suddenly, to our horror and amazement, we heard the wild screams of women, apparently coming from the battlements above us. For a few seconds we were too unnerved to do anything but crouch together against the wall; and then the cries stopped as suddenly as they had begun, and we could hear nothing but the howling of the wind. We were just getting over the first shock, and wondering what it all meant, when the cries started again louder than ever, and Thomas, standing up, shouted to them to ask what was the matter. However, the women, whoever they were, took no notice of him, and every few minutes kept repeating the same call, which Thomas said was old Mahratta, and meant, “ Help, or we perish.” During one of the pauses we held a consultation as to the possibility of going to their assistance. To scale the wall was impossible, and the only other way of reaching them meant retracing our steps for about a quarter of a mile, and then a long and difficult climb over the old ruins—a dangerous proceeding in the daytime, but quite impossible at night. So we decided to again try to communicate with them from below, and with that object, groped our way out to about ten yards from the wall and looked up. A big black cloud completely obscured the moon, and made it impossible to see anything for about a minute; but as this drifted away, we could just make out the dim outline of three women standing on the wall. Twice Thomas, who understood the language, shouted to them, but again they took no notice. Then a rift in the clouds gave us better light, and we saw that two of the women were carrying little children, and that the third held one by the hand. And, as we watched them, the moon, which was just behind them, found an opening, and for a few seconds shone brightly. Then, to my amazement, I noticed that I could not only see the clear outline of it through one of the women’s bodies, but also the drifting clouds through all of them. Apparently the others had noticed the same thing, for as another big cloud rolled up and once more obscured the moon, we all three sprang back to the wall, and without a word started groping our way along it towards home. But hardly had we gone a dozen yards when from the wall above us came peal after peal of mocking laughter. So unnatural and diabolical did it sound, that, panic-stricken, we ran like maniacs. How we ever covered those two miles home at such a pace without breaking our necks, it is impossible to say.

Just to be Relentlessly Informative, “Badmash” is a blackguard, a wrong-un, someone “aggressive, violent, or evil,” according to an online definition. I had no idea the term would still be current, but it seems to have been relatively well-known to the reading public as a result of the British occupation of India.

While the mocking laughter reminds us of the heartless mirth of the will-o-the-wisp, Elementals, or the Good People, when they have managed to lure travelers astray, the women on the wall were possibly a specific type of local ghost called a churel, the vengeful spirit of a woman who died in childbirth or while pregnant, sometimes because of abuse by her in-laws. Seeking revenge they lure men into the mountains and kill or vampirize them. Perhaps these spectres hoped to decoy the men into the dangerous ruins by their piteous calls of “Help, or we perish.”

Other spectral entities with mocking laughs? chriswoodyard8 AT gmail.com