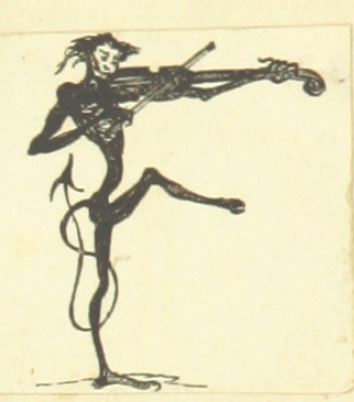 The Devil is a Tenor; and a champion fiddler!

I was excited by the title of the following article; new methods of divination are always thrilling. And being a musician myself, I wondered how it was done: oracular arias, jazzy soothsaying, or trance-rap all suggested themselves. Turns out, the tune was called by the Devil Himself.

Considerable excitement has been caused in the town of Duisburg in Prussia by the trial of two “sorcerers,” a man and a woman, self-styled professors of the ‘”black art.” who extracted large sums of money from credulous persons by “raising the dead’ with all manner of mysterious rites. The premises on which the operations were conducted were decorated with strange wooden figures, stuffed snakes and owls, and weird inscriptions on the walls. The client was brought into a dirty little room, thick with the odours of evil-smelling herbs and sulphur. The sorceress, draped in black and scarlet robes, glided in, and as she entered her confederate disappeared and the ceremony began. Long incantations were gone through, and a mystic appeal was made to the inhabitants of the lower world. After a long silence the appeal was answered in a high-pitched tenor voice, the alleged prince of darkness pronouncing in a song the destiny of the client. [La forza del destino?]  The interview closed with the anointing of the victim with a salve warranted to preserve him from sickness and disease for all time. This small boon was granted for sums of from 3d to 5d, according to the appearance of the client. The sorceress, whose name is Sibbles [could there be a more adorable name for a Sibylline sorceress?] and his Satanic Majesty, who was christened Bonne, were shown, in a curious manner, to be impostors. Bonne was engaged to sing at a local concert. His performance was but half finished when an agitated member of the audience rose and denounced him as Satan, with the result that both the impostors were arrested and put on trial. They have now been sentenced to three years’ imprisonment each.

The Devil is noted as a champion fiddler, of course, but who knew he was a tenor? A Hell-den tenor naturally, except, of course, in Gounod’s Faust, where Mephistopheles is a Là-Bas-baritone.

Any other examples of musical divination? Sing it to me at chriswoodyard8 AT gmail.com.