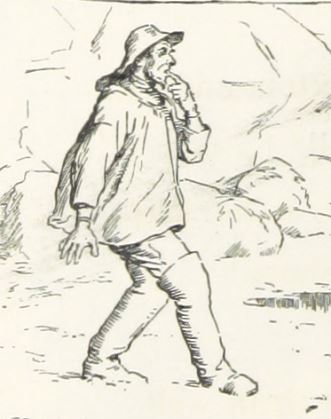 The Goblin Jacket of the fisherman

I confess I really don’t know what to make of this odd narrative from Barbados about an ominous post-mortem appearance of a murdered fisherman’s jacket. Was it a message from the dead man or some Trickster manifestation?

The occurrence which it is proposed to relate in this paper is one which has to this time fairly set at nought the inquiry and research of such scientific men as have been made acquainted with it, and it is a case where the element of the natural is so combined and confused with the supernatural, that the mind is tossed in its conjecture from one to the other, without a chance of arriving at a solution of the mystery. It has been the object of the writer, while relating certain legends connected with, or arising in, the Island of Barbados, to submit to the readers of Once a Week such matter only as could be authenticated, and to give chapter and verse for the account. On this occasion, though the anecdote certainly demands some redoubtable testimony—documentary or otherwise—all that can be offered by the writer is the personal evidence of a member of his family, who, in common with the governor of the island and his staff, were spectators of the phenomenon, though the population en masse must from time to time have witnessed it, besides such visitors from adjacent islands as were attracted to Barbados by the extraordinary reports of this mystery.

Early in the beginning of 1800—the exact date unfortunately cannot be supplied—an event occurred which disturbed and alarmed the inhabitants of the Island of Barbados. News had been afloat some time in the spring of the year, of the mysterious death of a black fisherman, who was, it is presumed, well known, since his disappearance…created considerable sensation in the parish to which he belonged, and, indeed, all over Barbados. It seemed impossible, however, notwithstanding that several people were arrested on suspicion, to fix the guilt upon anybody. The clothes of the murdered man—for he had met with a violent death, if the testimony of the ground steeped in blood be of any weight—were discovered in a wood by some stray people, and were produced at a renewed committee of inquiry. But his jacket, which was a coarse knotted garment, such as fishermen wear on some English coasts, was nowhere to be found; nor could the body of the ill-fated black be recovered, notwithstanding a rigorous search in all directions. This mystery alone gave importance to the wretched negro’s disappearance; but though unsolved it began to lose interest, and was dying a natural death, when, one morning, an inhabitant of St. Philip’s parish staggered the local authorities by a report that the murdered man’s jacket was floating in the middle of Tudor’s Pond, which was enclosed in an estate hard by the main road, and in the centre of a field, through which it was approached by a narrow walk or footpath.

Away rushed hundreds of gaping blacks and whites to the spot; and there, sure enough, was to be seen, floating about in the middle of Tudor’s Pond, a fisherman’s blue jacket.

The news spread like fire among the canes, (to use a local illustration,) and in a short time a great crowd encompassed the pond. The authorities, roused by this fresh stimulus into a hope of obtaining some clue to the agent of the late murder, now appeared upon the scene, but only just in time to see the jacket slowly sink and disappear. Drags were instantly employed, and, after some difficulty and loss of time in their carriage, boats arrived, and were launched into the pond. After some hours of unavailing labour, the boats were pulled up on the banks, and the crowd separated—full of surmises, suspicions, theories, and of hints at Obeah, the negro’s point d’appui of superstition. The mystery, however, was not to end here; for next day a large concourse assembled at the same time—between eleven and twelve in the morning—to watch for the possible reappearance of the jacket. Punctually at twelve o’clock the blue garment rose to the surface of the pond. Horror now fairly took possession of the spectators; some ran for guns, and others for the governor. Down came the authorities, with the chief official, and the member of the writer’s family (his grandfather) alluded to above. There was the jacket floating calmly.

A boat was now put out by order of His Excellency the Governor, and its occupants rowed up to the mystery: the boat erupt on, nearer and nearer—till a man in the bows cautiously extending his oar attempted to secure the jacket. Just as he seemed on the point of touching it, down it sank like lead. The rowers backed water a little and waited. The jacket, after a brief space, rose again in the same spot. This time the boat made a rush at it—but once more the thing disappeared before the oar could reach it. The governor now gave orders that, on its reappearance, the jacket should be fired at. Accordingly the crack shots awaited its rising, with their rifles fixed in their shoulders and pointed at the spot in the centre of the pond. They were not disappointed—up came the jacket, and on its reaching the surface, a dozen bullets riddled it. The jacket, however, didn’t sink: the water was white with the dashing of the bullets, and the object of their aim was severely agitated, but it was not till they paused and the boat approached that it sank—but then it went down like a stone; and it being by this time one o’clock, it rose no more that day.

The island was now in a ferment of doubts and fears: scientific men (there were not many, it must be confessed, in the island at that time) shook their heads after vainly endeavouring to find a natural reason for this strange occurrence. “It must be a hoax,” they said aloud, but how a hoax could possibly be worked in the centre of a pond, they did not deign to explain. Day after day, at twelve o’clock precisely, the goblin jacket rose to the surface of Tudor’s Pond, and, day after day, eluded all efforts to secure it. The pond itself was guarded and watched incessantly, and dragged thoroughly at intervals, but to no purpose—the best swimmers in the island (and in Barbados, as in most West India Islands, the inhabitants seem to have an instinct for swimming, and are, as it were, “to the manner born”) endeavoured to circumvent the delusive jacket, but were obliged to return to the shore baffled and exhausted. In vain, as it sank, did they dive after, and strife to follow it to its retreat —panting and almost breathless, they were compelled to come up again and rest, while the provoking jacket would slowly rise before them as if in scoffing. Visitors from various adjacent islands arrived—the best shots, the most noted swimmers would try their respective skill, but fruitlessly. Approaching the jacket as closely as possible, the swimmers would dash out from their boat apparently upon the jacket, but they never succeeded in catching it. Day after day, and week after week, this went on in sight of the governor and other officials, and before thousands of spectators; and no one could “catch the jacket asleep,” as it was said.

Gradually, however, the pond began to dry up and expectation was raised to its height. Nothing, however, was discovered in the pond, when all the water had evaporated under the severe drought—though it was dredged carefully, and when the rains refilled the basin, the appearances entirely ceased.

No one, as yet, has accounted in any way satisfactorily for this startling occurrence, though one or two theories were broached from time to time—one of which (suggested to the writer of this paper) was to the effect that some fish had got entangled in the jacket, —which might have been thrown into the pond by the supposed murderer—and so in its struggles to escape, and for fresh air, have dragged the jacket to the surface of the pond. This is fair enough, so far as the mere rising of the jacket and its elusion of pursuit are concerned, but how was it that it rose and sank at precise intervals? and how was it that no traces were discovered when the pond was dredged and dragged? Furthermore, is it likely that out of the hundreds of bullets actually fired into the jacket, not one succeeded in killing this entangled fish? Let some of the readers of Once A Week try and solve the mystery. R. Reece, Jun.

It is difficult to tell whether the jacket described as “knotted” was macramé work or if that is a misprint for “knitted,” the more common construction technique for many European fishermen’s jumpers.

The singularly perverse jacket seems to have few parallels in European Fortean literature. The closest thing I can compare it to is this floating omen of death:

It is reported that there is a pool adjoining to Brereton (Cheshire), the seat of that honourable family, wherein bodies of trees are seen to swim certain days before the death of any heir of that house, and after they are never seen till the next occasion. The Occult Review July 1916: pp 20-26

Perhaps it might also be classed with the boggarts, such as the Holden Rag, so admirably resurrected by Dr Beachcombing.

Is the apparitional jacket something known to Obeah practitioners? As related, the story is anticlimactic: no corpse, no revelation of the murderer(s), no sudden death of the Governor. Where’s the fun in that?

R. Reece, Jun. also wrote about the classic moving coffins of Barbados story (which he attributed to suicide Dorcas Chase, buried July 6, 1812, who, he says, starved herself to death because of her father’s cruelty and the other dead wanting to expel her from the vault.) [Once a Week, 11 March 1865: p. 319-21] Can we trust this story any more than we can trust his “chapter and verse” about the Chases and the moving coffins?

Float ideas to Chriswoodyard8 AT gmail.com

Bruce has sent this and I think he’s hit the nail on the head about imported boggarts with a lashing of local lore:

You might be on to something with the Holden Rag. Much of the planter class of Barbados came from Scotland. It seems likely that they would have brought their old superstitions with them. There’s a very British type shape changer in in Jamaica called “Rollin’ Calf” that is still widely believed in by people there. It’s a death dealing white calf, wrapped in chains, that clanks along the roads at night with burning red eyes. It’s said to turn into a giant cow in a second that takes it’s victims away, never to be seen again. It’s always struck me a classic British bogart, with the motifs of  slavery added when it reached the sugar plantations of Jamaica.