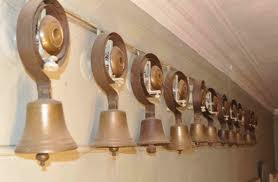 Hark How the Bells: Bell Ringing and Death

So blasted many Christmas songs bang on about bells: Carol of the Bells, Jingle Bells, Ding Dong Merrily On High, Jingle Bell Rock, Silver Bells… Naturally these are always accompanied by someone shaking a string of sleigh bells, the silvery timbre of which hits me right between the eyes, causing a desire to boil the entire choir with stakes of holly through their tuneful little hearts. (And lest you think this is a prejudice against modern Christmas tune instrumentation, I don’t like the zimbelstern either.)

That ill-tempered introduction aside, let us swing over to a story of bell-ringing and death. We have covered tokens of death before, including phantom funerals and the predictive sounds of the phantom coffin-maker. Here is a case, not of a cheerful Christmas bell, but of the mysterious tolling after a death–a kind of truncated phantom passing-bell.

In the Spiritual Magazine for February last is narrated a very interesting case of spiritual bell-ringing immediately before death, from the pen of Sir Walter Scott, which has brought to mind another in my own experience, but soon after death instead of before death.

In the summer of 1852, I happened to be on a visit to my brother-in-law in Lerwick, the principal town in the mainland of the Shetland Isles, N.B. Towards the close of my visit my brother-in-law died suddenly, there is reason to believe from the rupture of a blood-vessel of the stomach into the peritoneal cavity. I was then a medical student, and, like most of the fraternity, a thorough unbeliever in the supernatural. I would rather invent fifty unfounded excuses, or possibly condescend to tell an actual untruth, than allow that I could credit for one moment that the dead could in any way influence the living, or own that there was such a thing as spirit communion with us, good, bad or indifferent.

On the evening of my brother-in-law’s death there were four persons in the house with the corpse, namely, my sister, the cook, housemaid, and myself. The housemaid made the following remark to me, unasked: “Doctor, if you hear the bells ringing during the night, do not be in the least alarmed, as it is quite a common thing in this country when there is a corpse in the house.” As might be imagined, I laughed heartily at the superstition of the girl and still more when the cook corroborated her statement, and said “it was no joke, but a serious thing.” To which I replied, “Well, if the bells do ring, you have given me warning enough, and I have a pretty good guess who it is that will ring them, if it is not the cat.” (There was no cat or other living animal in the house.) To which they replied, that “it would be done by the spirit of the deceased.” Being sceptical, as I have said, and duly warned, and without stating my reasons, I proposed the following arrangement for the night. My sister and the two maids were to sleep upstairs in a double-bedded room; I was to sleep on a shakedown on the drawing-room floor by myself, on the same flat with the room in which the corpse was laid out. As the children were expected early the following morning, and, as they might run into the nursery where the corpse lay, I locked the door, took possession of the key, and, to make certain, I drove a nail into the door and another into the wall out of reach and fastened over them a strong cord. My sister and I were closely engaged during the evening with friends looking over certain valuable law and other documents, and, after seeing our friends out of the door, I secured everything myself. With a candle I examined the back and front doors and windows on the ground flat, and, as there were a great many documents lying about in the dining room and tin chests with family and law papers, I closed the shutters and barred them—a thing rarely or never done in Shetland, as house robbery is all but unknown. I then locked the dining room door and took possession of the key. About 10.30 p.m. I went upstairs to say “good night” to my sister and the servants, all of whom had already retired. I then made for my shakedown very tired and with a feeling of anything but comfort. Unpleasant thoughts came into my mind; I felt it difficult to believe that one so gay and active could now be numbered with the dead; I felt as if any moment I might see him enter the apartment, or hear his kind and jovial manly voice.

Although I had been accustomed to the dissecting room and all its horrors, the nearness of a corpse of a dear friend, lately alive and well, fills one with very different feelings of awe and melancholy from that of a corpse who has no friend to pay for decent sepulture. Feelings or no feelings, ghost or no ghost, bell-ringing or no bell-ringing, nature demanded sleep, and at 10:55 the candle was put out, and I closed my eyes in peace. So far as I could guess, I had scarcely gone to sleep say 15 minutes when I heard a bell ring, and I recognised it as the dining room bell, the key of which was under my pillow. As I thought that I had only dreamt, I sat bolt upright, determined to listen. In about five minutes more a terribly distinct ring occurred, and it was the same bell. Not another sound could I hear, and nothing was visible; but as I expected that the next part of the performance might be the opening of the drawing room door, in a most dignified and scientific self-possession I laid my head upon the pillow, pulled the bed clothes over my head, and went off to sleep. In the morning, as the housemaid or waitress—she was both—brought me my shaving water, she asked me “if I had heard the bell ring?” I said, “What bell?” She said, “The dining room bell, to be sure.” I asked, “How often did it ring?” She said, “Twice distinctly, shortly after you left us.” To all of which I replied, “Of course, I heard the two rings, but then one of you did it.” “Never!” the girl replied, “Your sister can testify that none of us left the room until six this morning.” I dressed quickly, went to the room where the corpse was, and found all as I left it, the back and front doors the same, and the dining room door locked, the window shutters fastened, and everything as I left them; the bell-pull and bell all right, and not even the tail of a cat visible. For all that, in my then ignorance, I swore it must have been a cat, a mouse, the wind, an earthquake, &c., &c.; but no, no, the girls stuck to their belief that the bell was rung by the spirit of their old master, or by a spirit.

The notion that it was the dining room bell leads to speculation that the dead man was calling for refreshments. I haven’t located Sir Walter Scott’s letter about the ringing of a bell predicting death, although he speaks of the passing bell in many of his novels and poems. If you know the source, give me a jingle at chriswoodyard8 AT gmail.com