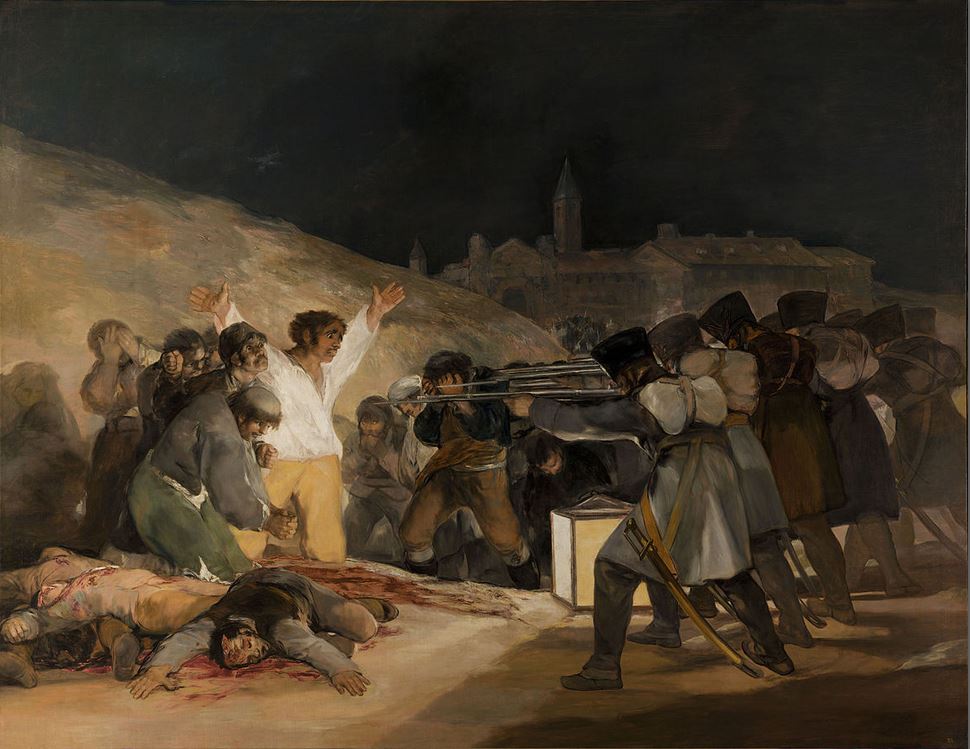 For no conscious reason, my thoughts turned this week to various methods of execution. We are all familiar with the guillotine, the garrote, the stake, the headsman’s ax, the firing squad, the gas chamber, the noose, and the needle.

There are, of course, more esoteric methods, perhaps found in the lives of the saints: crucifixion; grilling (St. Lawrence); having one’s intestines windlassed out (St Erasmus); being torn in pieces by horses (St Hippolytus ); wild beasts in the Arena (St Perpetua, although technically finished off by an inept swordsman) or flaying (St Bartholomew, who is frequently portrayed with his skin over his arm like a discarded raincoat.)  We might also note the Celtic three-fold death of stabbing, hanging, and pinning down in a bog to drown; burial alive as a foundation sacrifice; and being put into a sack and trampled by elephants.

Let us add four new methods of capital punishment to this gruesome catalog, beginning with an elegant and artistic way of administering electrocution. This inventive German amateur was in the vanguard of electric executions. The first US execution by electric chair did not occur until 1890.

There is now being exhibited at Leipsic an apparatus for putting criminals to death by electricity. So long as it is found necessary to retain capital punishment on our statue books it may well be that the electric method is the most merciful and least repulsive process that could be devised for carrying the sentence into effect. But if such means are ever adopted in this country the details will certainly not be carried out in the theatrical manner which commends itself to the Leipsic amateur. In this apparatus, behind the chair in which the condemned man is to take his seat—and by means of which, as we need not explain in detail, his body is placed in circuit with a powerful coil—there stands a conventional figure of justice with bandaged eyes holding the balance in her left hand and the sword in her right. The criminal having taken his seat, the presiding functionary is supposed to run over the record of his crimes and the sentence of the law. This ceremony completed, he folds up the document and places it in the scale pan, the arm of the balance descends, closes the circuit and all is over.  St. Paul [MN] Daily Globe 3 November 1886: p. 7

The punishments and execution methods of the Far East were exploited in any number of lurid newspaper pieces, designed to horrify and fascinate westerners. This particular sample is excerpted from a longer article about Siam, which tells how most executions are by decapitation. Is it a record of a genuine historic practice or a journalist’s fantasy?

A punishment which is reserved for extraordinary cases is the building up of the victim in plaster of paris—one of the most diabolical and inhuman tortures that the mind can conceive.

A large hole is dug in the ground of sufficient length and depth to hold the body of the intended victim, and into this hole he is placed, with his hands and feet securely tied. Liquid plaster of paris is poured in over the body, incasing it in a mold. On cooling it hardens and contracts, gradually squeezing the victim to death in an adamantine mold, and causing the most excruciating torture. The body is allowed to remain in this state for weeks and months after death as a warning to other offenders. Evening Star [Washington, DC] 25 March 1899: p. 23

In consenting to become a part of the United States, we are not bound to accept the many and conflicting theories and practices which prevail there, regarding penal institutions, or the delicate etiquette of the gallows. Should President Dole and Judge Freer, in their enthusiasm for the perfect assimilation of the institutions of the two States, attempt to incorporate any of these picturesque phases of civilization into the proposed organic laws, the other Commissioners who may better understand the side lights of the varied social life of a numerous people, will gently check them.

As the State of New York kills its murderers with electricity, which is regarded as a rather ghastly novelty, there is no reason why the Commissioners should not retain some of the ancient and interesting Hawaiian usages, in the proposed organic law. The “praying to death” was accepted by Hawaiian statesmen and scholars, fifty years ago, as an effective way of terminating disorderly lives. It was said to be as effective as any method of capital punishment. It was protracted but painless.

It may be urged that in these days of activity and haste, a slow but painless method of execution is not suited to the restless spirit of the age. The reply is, that we should reserve and maintain at least one institution which suggests the quiet and moderation of the past. The Commissioners from the Mainland may be somewhat skeptical about “execution by prayer,” but a series of experiments might be tried during the visit of the Commissioners, which would settle the matter.  The Hawaiian Gazette [Honolulu, HI] 23 August 1898: p. 4

Here is a news story telling of a Hawaiian “Death Prayer.”

The progressive Japanese were dissatisfied with some features of electrocution (as were many persons around the globe) and went in search of something more humane. There was also a certain superstition surrounding the disfigurement of the body—the mutilated dead would return as vengeful ghosts. This may have been a consideration in the invention of this vacuum death chamber.

A Stuffy Death Proposed for Condemned Persons in Japan.

From the Boston Herald

The Japanese government is striving to discover a new and more modern mode for the execution of its condemned criminals. It has laid aside the idea of execution by electricity as it is now practice din America, and is considering an entirely new and improved method of execution. It is quick, painless, quiet and peaceful. The Japanese consider it even far better than the most modern mode, that of electricity, inasmuch as it does not harm the appearance of the body in the least, whereas electricity, when not applied to exactly the proper degree, scorches, burns and shrivels the skin of the victim.

The “death” or “vacuum” chamber, as it is to be known, is to be an airtight cell. It is to be 8 feet in height, 10 feet wide and 10 feet long. The four sides are to have each an airtight window of three-quarter inch plate glass, so that the operators, prison and other officials may have an opportunity to witness the execution and determine the results.

The cell will be connected with an air pump which will have a power of causing the expulsion of the air in the cell in one minute and forty seconds, thus acting so quickly as not to allow the victim to become suffocated or distressed in even the slightest degree, but instead causing almost instant death. [One minute forty seconds is scarcely instant.] In fact, it was shown when the experiment was tried upon a large St. Bernard dog that the animal was dead a minute and a half after the vacuum was completed.

The experts before whom the experiment was tried were not only marvelously pleased and surprised by the excellent success, but were so positive while the vacuum continued, from the peaceful and lifelike appearance of the dog that he was still alive, that they would not allow the vacuum to be discontinued for thirty minutes. When, on examination of the St. Bernard, they found that it was dead one and a half minutes after the vacuum was completed, they pronounced the method “a revolution in the mode of execution,” and declared that it was far better than electricity, which causes a stiffening of the muscles and a frightful appearance of the face and eyes.

The method to be pursued in the execution of criminals by this chamber, should it be adopted will be as follows: The condemned will be stripped, so that the air which might become lodged in and between the folds of the garments will not be able to cause any hitch in the execution. The condemned will be placed in a position on the flat of the back, at full length, and with the hands clasped above the head, so as to allow full expansion and contraction of the chest.

This is done so that when the vacuum is forming, the air in the body, being expelled by the contraction of the chest, will be instantly drawn out of the chamber by the air pump, and then, there being no air in the chamber to replace that exhaled, death will ensue. Evening Star [Washington DC] 11 August 1899: p. 10

It all seems so reasonable one wonders why the technique was not adopted, although something similar is used today to preserve dead pets. That St Bernard did not die in vain.

Any other unique methods of applying the death penalty? Soak in hemlock and send to Chriswoodyard8 AT gmail.com