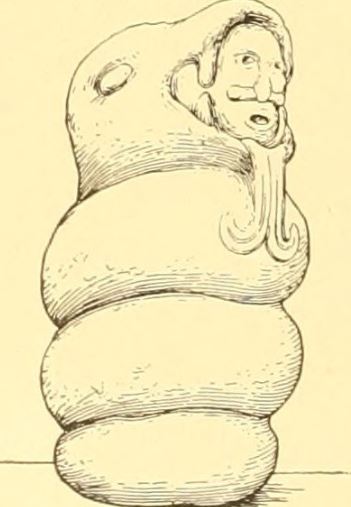 Creature Feature: The Maggot in the Churchyard Aztec Maggot Man

Today’s creature–of “a most repulsive order” comes from a churchyard in Yorkshire.

Another case, and this time one in which phantoms of the dead certainly play no part. For a long while a church in Yorkshire—I will call it Northington—was haunted by a ghost of the most repulsive order. Happening to pass through the churchyard one bright, moonlight night, a postman of the name of Mullins saw, issuing from the newly-made grave of a man called Peters, a large white object that wriggled in and out like a huge worm. For a moment he was too dumbfounded to do anything, and stood staring at it, immeasurably perplexed as to what it could possibly be. Then, urged on by a fascination he could not resist, he advanced a few paces. To his inconceivable horror the thing was a maggot—a monstrous maggot, from the inside of which emanated a glow like the very magnified glow of a prodigious glow-worm. He looked at its head-pulpy, pointed, poisonous, and saw two large and long light eyes, fashioned after the shape of those of a human being, and filled with an expression so insatiably cruel and vindictive that his blood congealed in his veins as he gazed at them. The body of the thing was “ringed,” and from all over it issued a saliva-like fluid which marked its wake as it glided forward.

Though filled with dread lest it should turn round and discover him, he could not resist following it, and keeping some ten or twelve yards in its rear, he dogged it stealthily. In and out the tombstones it went, across first one path and then another, until it reached the confines of the churchyard, when, to the postman’s consternation, it passed through the gate leading into the vicarage, and vanished from sight altogether on the threshold of the front door. The postman then went home, his flesh creeping horribly, and did not feel at all safe till he was well within the sheets with two stout doors between himself and the road.

He told his wife and his greatest friend what he had seen, but no one else, and on the following night, in company with them both, visited the churchyard, when all three witnessed the same phenomenon.

The ensuing day the Vicar, his wife and child were all seized with violent vomiting, which the local doctor attributed to ptomaine poisoning, and died. On the fourth night, the postman, accompanied by the same people, again went to the churchyard and tracked the phantom to the house of the village blacksmith, who within the next twenty-four hours was taken ill with the same symptoms, and also died. Several nights then passed quite uneventfully, and the postman and his companions were coming to the conclusion that the thing would not be seen again, when, on the tenth night after its first appearance, they again beheld it, and to their unmitigated horror saw it enter the postman’s own house. The succeeding day the postman’s only child. a boy of five, was seized with sickness and died in less than an hour.

The postman then took the law in his own hands, and without consulting the temporary Vicar, who did not reside in the village and consequently took little or no interest in the Church, went to the churchyard in the dead of night, when no one was about, and dug up the grave from which the phantom appeared to originate.

The coffin was intact, but on opening it, the postman fainted; the face of the corpse within was no longer that of a human being but of a devil—a devil that leered at him. On coming to his senses the postman, aided by his wife, carried the coffin and its contents to a neighbouring field, and after saturating it thoroughly with paraffin, cremated it. Then they stole back to the churchyard and filled in the grave. They visited the churchyard the next night, but nothing happened, nor did they ever again behold the phantom.

It must be added that the man whose body they burned, was well known to have been on very bad terms with the Vicar, who had constantly rebuked him for drunkenness, and with the blacksmith, who had recently put him in the County Court for not paying his rent; but the postman could not understand why the man should have had any grievance against him, though they had often had heated arguments on religion and politics.

Well, of course it’s Elliott O’Donnell, he of the morbas AKA the disease elemental, and the mass of fetid jelly. We would expect nothing less from the author who never met a noxious effluvia he didn’t like.

The notion of a creature spreading contagion from house to house is an ancient one, so we can’t fault O’Donnell for picking up on the folklore. It reminds me a bit of M.R. James’s story, An Episode of Cathedral History where we find  “a shape that slipped out of the little door of the south transept as the dark fell in, and flitted — taking a fresh direction every night — about the Close, disappearing for a while in house after house, and finally emerging again when the night sky was paling.”

It runs in my mind that there must be a horror story or film about slimy man-sized maggoty Things; it would be unusual if there were not. Or perhaps I’m just thinking of Poe’s “The Conqueror Worm.”  Any other parallels? Saturate with kerosene before sending to Chriswoodyard8 AT gmail.com. I have matches at the ready.

Jim D. writes in with an E.F. Benson story:

Someone may already have written you on this item, but the story of the giant maggot haunting the churchyard is strongly reminiscent of E.F. Benson’s short story Negotium Perambulans, (1922) wherein a giant phosphorescent slug-like creature, exuding an “odour of corruption and decay”, haunts the site of a desecrated medieval church, and makes periodical vengeful forays reducing its  victims to empty husks of skin and bones. One of Benson’s more lurid tales… The link is here.

Many thanks, Jim! This is a Benson tale I’d missed.