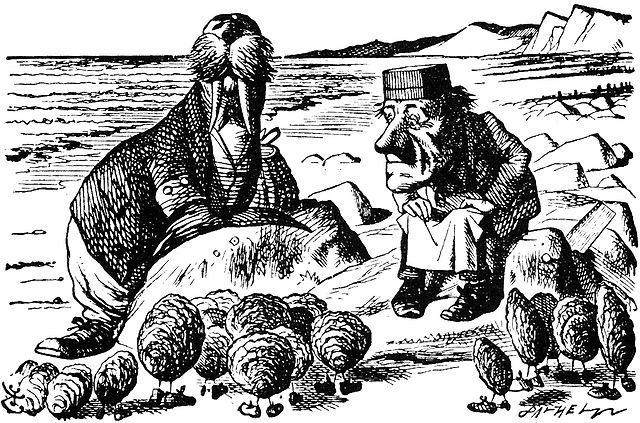 Dead as a Doornail – The Carpenter of Doom John Tenniel illustration of the Walrus and the Carpenter, with oysters.

A strange little tale of recurring visits from a Carpenter of Doom, narrated by a person hiding behind a veritable hedge of initials.

Well, it was very rude of him to come and spoil the fun. It doesn’t appear that the Carpenter shed any bitter tears for his victims, if victims they were.  I’m not sure what to make of this tale of a psychopompish carpenter come to bear away the dying. How many carpenters might be spotted in any given day in Edwardian London if we assume it was all coincidence? Like most of the working class, perhaps they were invisible until something jarred the narrator into noticing them. Yet, there is that strange scene where the carpenter emerges from the uncle’s house…. Returning to rational explanations, the man’s face sounds sinister in the extreme, but one suspects that exposure to lead, solvents, varnishes, and other poisons might explain his nose and odor. The narrator is perhaps deliberately unclear about whether others saw the carpenter.

I later found a story of a menacing carpenter seen only by a very sick woman who felt he meant her no good.

Susan Mudgett sent in this beautifully detailed explanation of workers and paper hats written by Kathryn Kane.  Thanks, Susan!