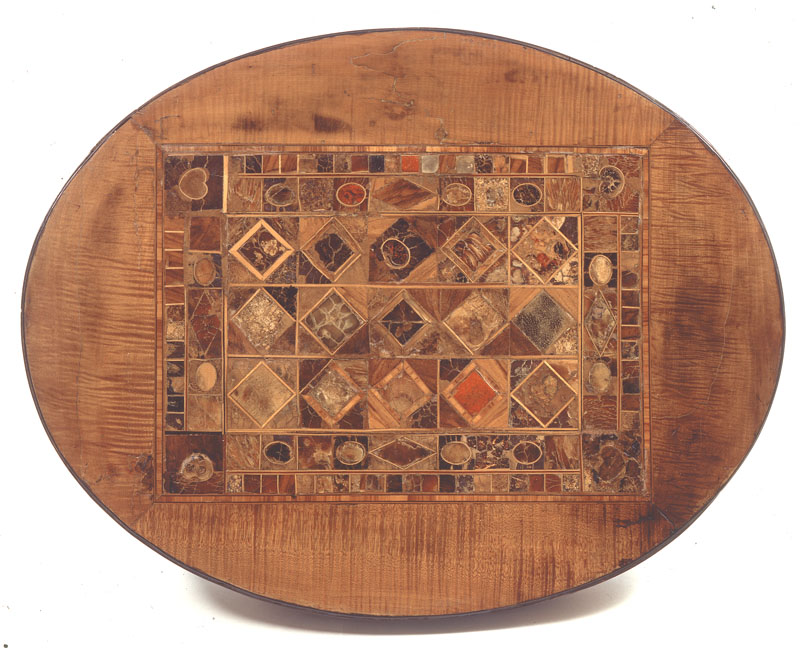 The object above looks like an indifferent specimen of Renaissance pietra dura/ pietre dure,the decorative art of hardstone inlay, or perhaps clever marquetry, made to look like polished jasper, carnelian, and sardonyx. It is, however, made of petrified pieces of human viscera, bone, and muscle, the creation of Professor Segato of Florence, who discovered a process to preserve human remains by turning them into a stone-like substance. Dura mater instead of pietra dura.

I first ran across a hint of this ingenious mineralizer in an 1881 newspaper squib:

A Florentine chemist has by some mysterious process converted the corpse of a girl to the semblance of marble, perfectly white and hard, and the petrified body is being shown at the Milan exhibition. Jackson [MI] Citizen 22 November 1881: p. 3

“In this hospital [Santa Maria Nuova, Florence] is to be seen the museum of the late Prof. Segato, who discovered the process of petrifying animal substances, so that, while they retained their natural colors and shapes, they became as hard as stone. The church, as usual, interfered with his art, on the grounds that it was contrary to the Scriptural doctrine of “into dust shalt thou return.” Consequently, unable to prosecute the discoveries further, he soon after died, leaving to the world this unique museum as the evidence of his success and to tantalize science with regrets for the last secret.”

Concerning a remarkable table made by this discoverer, the writer says:

“It comprises every portion of the human body transformed to stone, destined to endure as long as the world itself, if not ground to pieces by violence. There are two tables, one finished and polished, the other incomplete, made of mosaics, formed by sections of human bones, brain, lungs, blood vessels, intestines and muscles, as firm as marble, showing the internal structure of each, all resembling colored stones. Without an explanation every visitor would presume them to have come from some stone mosaic manufactory for they are symmetrically arranged in squares, with the great variety of colors nicely graduated. Different portions of the human body, showing the internal anatomy, are so perfectly petrified as to form perfect objects of study of the medical student. Even morbid anatomy was subjected with entire success to this process. Animals of all kinds, reptiles, chickens, in and out of the egg. In short, nothing that had warm blood was capable of resisting his petrifying touch.”

“The Roman Church, above all others, did wrong to discourage the art. Next to medical colleges it is the largest dealer in dead men’s bones. What an improvement it would have been, instead of exhibiting a knee-pan in a vial, or a dried skull in a gold case, to have held up for adoration an entire saint as fresh as in life. All skepticism in relics would then disappear, for however easy it may be to substitute one bone for another, there could be no possibility of destroying personal identity. The stone saint would be the actual image of the live saint; no daguerreotype could be half so exact; and when not in use, could be quietly laid by on the shelf, as is frequently done in life.”

“There is, however, in this museum the head of a young girl, with long flaxen hair, of remarkable beauty, as soft and tresslike as in life. Belonging to this head is a virgin bosom, snow white, and of a perfection of form that nature seldom equals, and art never surpasses. Power’s Greek slave, or the Venus de Medici, could exchange busts with this maiden without loss; so exquisite are its proportions, and so pure its outlines. Here, then, is a figure which women will envy, and men admire through all time, as cold and hard as flint, yet warming feelings with love and pity for the fate of one so young and beautiful. All that is known of her is that she was found dead under the roof of a church that fell in, and Segato possessed himself of her corpse.”

The story above was quoted in the “Curiosity Shop” question column of the Chicago Inter-Ocean.  The paper continued its article with details suggesting that the story was a traveler’s tale, but then gave an account of an investigation by the New York Sun, which seemed to conclude  that the table was real.

“The author of the above does not give his name, but investigation through periodicals of the last quarter of a century shows that Segato’s table has “cropped up” every little while as a favorite “traveler’s tale” for the assistance of sensation-seeking newspaper correspondents. Not more than two years ago an account of it was given in a medical journal, which should have known better than to give place to such an account without full verification. The writer mentions, but one table and places it in the Pitti Palace, though none of the guide books bear out his story by any mention of it.

“’In the Pitti Palace at Florence is a table which for originality in the matter of construction and ghastliness in conception is probably without a rival. It was made by Giuseppe Segatti, who passed several years of his life in its manufacture. To the casual observer it gives the impression of a curious mosaic of marbles of different shades and colors, for it looks like polished stone. In reality it is composed of human muscles and viscera. No less than a hundred bodies were requisitioned for the material. The table is round, and about a yard in diameter, with a pedestal and four claw feet, the whole being formed of petrified human remains. The ornaments of the pedestal are made from the intestines, the claws with hearts, livers, and lungs, the natural color of which is preserved. The table top is constructed of muscles artistically arranged, and it is bordered with upwards of a hundred eyes, the effect of which is said to be highly artistic, since they retain all their lustre, and seem to follow the observer. Segatti died about fifty years ago. He obtained his bodies from the hospitals, and indurated them by impregnation with mineral salts.’

“A few months ago a correspondent of the New York Sun undertook to run the story of this remarkable table to earth and find out how much truth there really was in it, and the alleged great discovery of its maker. He ascertained that some fifty years ago there was a physician in Florence named Giuseppe Segato, who declared that he had discovered a process of so changing the constitution of human flesh as to render it perfectly hard and make it keep its form and appearance indefinitely. He is said to have submitted specimens of his work to the Grand Duke of Tuscany, who thought well of the discovery and offered to purchase it. The physician refused the offer, and while he waited for a higher bid died, either suddenly or after a very short illness. He never revealed his process and his secret was buried with him.

The traveler who is curious to look up the specimens of Segato’s work, which are in St. Mary’s Hospital in charge of one Dr. Stanislao Bianchi, is amazed to find them very different from what he has been led to expect by the accounts he has received of them. The “table” is oval, of what looks like mahogany; it is about eighteen inches long by twelve wide, and consists of a top only; it has no appearance whatever of ever having had a pedestal. The human petrifications on it consist of thin and small sections or slices about one-sixty-fourth of an inch thick, which are veneered upon it. Some are diamond shaped, some oval, others square, with surfaces like fine-grained wood, all arranged in a symmetrical rectangular oblong design; there is a border around it, presenting at first sight the appearance of a checker board. Some of these veneers, by the effects of dampness, have become detached; one or two have fallen off altogether.

Professor Bianchi pointed out that these veneers were small bits of organisms of the human body such as the loins, kidneys, liver, spleen, lungs, skin, all of natural color, and that probably, in order to get them of small size, they had been taken from boys’ cadavers. There were, however, no human eyes in the border or anywhere else. Dr. Bianchi showed other specimens of Segato’s process—a female scalp of perfectly natural color, with long flowing hair attached; a woman’s breasts, fair and white, perfectly life-like. These preserved parts were not hard and stony to the touch, as though actually petrified, but were like pasteboard in thickness and firmness. It seems fair to conclude that the veneered pieces on the table had similar texture. Other specimens, including fishes, reptiles, human hands, and feet subjected to the same process seemed much firmer. The officers of the hospital evince far less interest than might have been expected in these curious articles in their care, and further investigation must be looked for to assure us of what importance the discovery may prove to science. Daily Inter Ocean [Chicago, IL] 20 April 20 1889: Vol. XVIII, Issue 27, Part 2, p. 11

Despite the detail, this account seemed completely improbable to me. The newspapers of the 1870s and 1880s were noted for their interest in petrified corpse stories. Even if such macabre mobili had existed, surely they had been “ground to pieces by violence” or by time.

But the internet is a wonderful thing. Today you can see, at this online museum, Professor Segato’s astonishing and disturbing handiworks.  [site is in Italian.]

If you have any interest in a more detailed analysis, see “An anencephalus foetus petrified by Gerolamo Segato (1792-1836),” R. Ciranni, G. Fornaciari, V. Nardini, D. Caramella in Med Secoli. 2008;20(1):7-17. It is fascinating to note that, despite radiography, CT scans, 3-D reconstruction and virtual endoscopy, Professor Segato’s method of petrification is still a mystery.

His grave, in Santa Croce Church, Florence, bears an epitaph that translates loosely as “Here lies Girolamo Segato—who would be intact, petrified, if the secret of his art had not died with him.”

See this link for an introduction to The Victorian Book of the Dead, a collection about the popular culture of Victorian mourning, featuring primary-source materials about corpses, crypts, and crape.