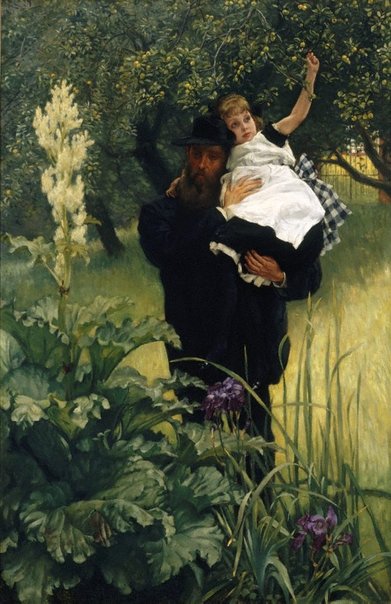 Father Left a Picture on the Pane. Father and child 1876

This story appears in The Ghost Wore Black: Ghastly Tales from the Past.

In trying to choose a post for Father’s Day weekend, I ran up against the statistical horror that is the father in the 19th-century press. Unnatural fathers, murderous fathers, insane fathers, fathers who forbid engagements, then murder their daughters’ sweethearts, fathers who threaten to behead their children–then carry out that threat.  I wanted to counterbalance my cheery Mother’s Day post on “Maternal Influence and Monsters” with something less grewsome, yet still Fortean. But somehow I just didn’t have the heart to use the lurid, but true “Hatchetman” story I’d originally selected. If, after reading today’s offering, you decide you would prefer a tale from my bulging file on Victorian family destroyers, just slip a note into the pneumatic tube to chriswoodyard8 AT gmail. com.

I have previously reported on the mysterious faces that appeared on glass window panes beginning about 1871.  The phenomenon was a pervasive theme through the 1910s, although there are a few reports from the early 1920s and not long ago, the Virgin Mary appeared on the glass windows of a health center in Florida. How much of this is self-deception; how much simple human brain pattern matching? I am not qualified to say and at this historical remove, I doubt anyone could sort out the riddle of these images. I will say that, in many cases, they appear to have some element of PK: a severe stress–a death, a murder, a shock–somehow creates an image of a known person, recognized instantly by the immediate family and sometimes, without prompting, by others. This particular story also contains an “omen of death” element. One oddity I note in this image is that it is described (somewhat ambiguously) as being able to be seen by someone inside the room with the window. Every other example of this sort of image I’ve seen can only be seen from the outside. Another enigma….

LEFT A PICTURE ON THE PANE

A Strange Memento of the Death of Husband and Children

Pittsburg, Pa., August 16, 1890. A mystery surrounds the home of the late James Dougherty, at Swissvale. Within four weeks the father and three children have died. The mother refuses to remain any longer in the little home.

Midway between Swissvale and Hawkins stations on the line of the Pennsylvania Railroad, and on a street which leads toward the railroad tracks back of the public school building, stands a little one story frame house. Surrounding this little home is a garden of probably half an acre.

This, until a few days ago, had been the home of the Doughertys—the father, mother, and three children. It was always the father’s delight returning from a hard day’s labor at the Carrie Furnace, where he was employed, to meet his little ones down near the river bank. Taking the short cut through the fields and over hills he would take the children one at a time, place them on his back and carry them to his little cottage.

He had always been a most devoted husband and kind father.

July 5, the second child was taken ill with a fever. It lingered for a few days then died. In just one week from the death of the first child another one, a little boy, was stricken down with the same malady and died within a few days. Hardly a week had passed after the death of the second child when the last and youngest child and the father’s favorite, was stricken with pneumonia and in a few days passed away.

THE FATHER GOES TOO

The death of the three children occurring in as many weeks was a severe blow to the parents.

Last Monday morning the husband departed for his work at the Carrie furnace early in the morning. As he left his wife he bade her the usual goodbye. With the parting salute, “Bear up, dear,” he vanished over the hills on his way to work. This was the last seen of him alive by his wife. That afternoon while engaged at work on a high trestle in one of the departments at the furnace he missed his footing and fell backward to a pile of iron below. He was killed instantly.

Just before the sad news was brought to the unfortunate woman she happened to be near the window in the front of the house.

She was horrified to see imprinted on an ordinary pane of glass in the window before her a picture of her husband as lifelike as if he stood before her himself. On his back was the favorite little girl and in his hand his dinner pail, just as had been his custom in days when all was bright.

The woman was frightened by the sight, and was in the act of notifying her neighbors when a messenger stopped her on the threshold and announced to her the death of her husband.

AFRAID TO STAY IN THE HOUSE.

The news completely prostrated her. The husband was buried yesterday, and Mrs. Dougherty left the house before night, saying she was afraid to remain there. She is now with friends.

Crowds of people have visited the house. The crape still flutters from the door, and one spectator after another files up to the window to see the sight. Every one expressed himself to the effect that it is a wonderful likeness of Dougherty and his favorite child. The picture has the appearance of being ground in the glass. It is near the centre of the pane. It is in such a position that it would really be seen by a woman sitting inside the room and watching the path over which her husband would return home.

Other faces in the window stories? chriswoodyard8 AT gmail.com