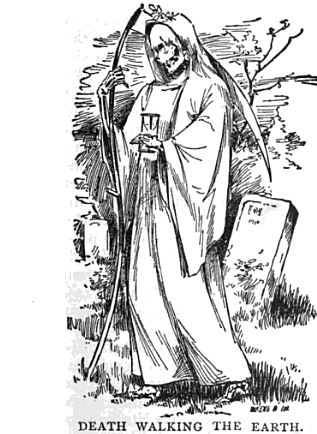 Fearing the Reaper: A Fight with Death Death Walking the Earth

Men fear death as children fear to go in the dark; and as that natural fear in children is increased by tales, so is the other.

Today, in our series of Things That Scare Us, we look at the fear of Death, particularly as personified by the hooded Grim Reaper figure.

I have neither the space nor the time to thoroughly explore the origins of the term “Grim Reaper” (earliest US newspaper occurrence 1840s) or the imagery of the skeleton with the scythe (possibly 14th century, reaping with the Black Death). The skeleton began to be clothed in a hooded robe in the 15th century, but the  “classic” Grim Reaper is primarily a 19th-century image.

I will say that the phrase “Grim Reaper,” at least in the 19th-century papers, was found only in connection with stories of death or in obituaries.  I have not found 19th-century reports of apparitions of the Grim Reaper (as called by that name) and they are still rare today. But no matter what its origins, the skeletal figure of Death still terrifies and has even had a resurgence in the cult of Santa Muerte. Today we look at Fearing the Reaper through a story about a man’s fight–to the death–with a hooded figure of Death:

When I was living in Calcutta in an old house near the heart of the city, I was leading juvenile man in a theatrical company.

One night I awoke in my bed with a feeling that something strange was about to happen. I looked about the great apartment, but saw nobody. The room, a large one, was fairly well lit from a lamp burning on a table by the wall, about four yards from the bed and nearly facing it. On the right of the bed and distant perhaps eight yards were the windows—three, very large, very lofty and all wide open. There was no moon, so the trees and building were outlined in inky-black silhouettes against the star-studded sky. From a window to the apex of the angle formed by the return wall was 3 feet. My bed was in the opposite angle, the wall to my left.

My eyes wandered to the windows and onto the angle referred to. There was something in the corner! I tried to see.

After awhile something moved. I felt menaced and was compelled to watch that corner. There was something there! It looked like an ample black crape veil hung on a peg and moved by a gentle breeze. But there was no peg in that corner and not a breath of air stirring. Now it became plainer. Unmistakably a figure, tall and broad, clad in a black garment like a monk’s robe, with a wide, loose cowl, which hung over the head down just below the throat, thus completely hiding the features. The sleeves hung six inches over the hand.

The figure hardly moved for some time, just seeming to vibrate at times as if shivering. At length it undulated out of its corner towards me. I began to feel uneasy; it wasn’t craven fear, but an increased apprehension. Presently the figure had so far advanced into the room as to be standing between me and the window; its opaque outline was distinctly visible. Most ghosts are quoted as being transparent—mine was not. I scruddled myself back in the bed towards the wall; at last I touched it. The figure was within three yards of the bed. I felt certain if that shade came on and touched me I was a dead man. By the Lord, I wasn’t going to die without a fight. I sat up in bed, feeling for the support of the angled walls with my back, and prepared for a fight. Oddly enough, I didn’t feel there was going to be any battle of muscles, but a fight of wills. The figure came on. I audibly addressed it a sort of hoarse whisper—I couldn’t find any voice.

It advanced. I stiffened my arms, dug my hands into the bed- clothes.

It still advanced. I felt rage at being defied. I had no sense of fear of any kind now, only frantic anger. I raged till I perspired. I cursed and swore at the figure till the arm in its wide, overhanging sleeve, which was advancing, stopped. I continued my abuse in the most violent language at my command till the figure, recurving, backed right into its corner.

This was my parting shot and I tumbled over tired and went to sleep.

But that is not all. I had another meeting with that grim phantom! Thirteen months after I went to Bombay I was very ill, and was carried on the Peninsular and Oriental boat to Nepal dying. Three days out we were driving through the monsoon. I was lying weak, helpless in my bunk, the ship rolling terribly. I had the same premonition. The figure was outside the cabin door. I got out of the bunk, jammed myself down in a corner ad, holding onto the washing-bowl with one hand and the raised-wood ornamentation round the porthole with the other, I most unwillingly rehearsed that scene again, and it was no walk-through. I worked as hard as I knew how. But Dr. Ferris and the Nepaul doctor tacitly agreed that if I had caved in on either of these occasions I should not now be spoiling paper in an attempt to edify newspaper readers.

One wonders if M.R. James ever read this account of a bedroom intruder and incorporated the notion of “if that shade came on and touched me I was a dead man” for his 1904 story, “Oh, Whistle, and I’ll Come to You, My Lad.” The narrator tells of Parkins’s reactions when faced with the Thing with the “face of crumpled linen:” “Somehow, the idea of getting past it and escaping through the door was intolerable to him; he could not have borne–he didn’t know why–to touch it; and as for its touching him, he would sooner dash himself through the window than have that happen.”

In my years as a writer about ghosts, I’ve found very few stories about apparitions of Death or the Grim Reaper. In one, the stereotypical Reaper was seen by a Cincinnati housewife, running across her lawn in a fearful hurry. She was terrified that the creature had come for her husband, who was at work. In fact, the husband was injured in an accident, but not killed. Perhaps the entity was in too much of a hurry to do a proper job?

In another, the hooded figure of the Reaper was seen in a building adjoining a haunted theatre in Chillicothe, Ohio. The building was used as a haunted house attraction at Halloween, but the Reaper was not a prop nor did it seem to be a human in a costume. The witness said that she saw this “grim reaper thing in a big hood” gliding along the hall by the second-floor railing. It drew up alongside her and looked at her.

“If I could have seen a face—if there had been a face—our eyes would have locked. I couldn’t take my eyes off of it. I kept walking down the stairs and it walked alongside me…”  She got out of the building and did not go back.

The last instance comes from a person who wishes to remain anonymous. I’ll call him “Eric.” He had been up most of the night with sweating, nausea, and chest pains: classic heart-attack symptoms. He was a stubborn person and did not want to go to the local ER, as it was in a rough part of town and he knew that the wait would be long, even with dire symptoms.

Suddenly Eric felt someone else in the room (his wife was asleep upstairs). He looked up and saw what he described as “the angel of death” hanging in mid-air: the classic, faceless, hooded figure. Even without a face, the thing looked at him and he looked at it. He said he was startled at first—a kind of mild shock and surprise—“Oh!” he thought. But after the initial shock of seeing the thing, there was a feeling of recognition and acceptance. Eric thought, “Oh. It’s YOU.” And that it would be all right to go now. Things would get along just fine without him.

At that acceptance—that willingness to die–the figure disappeared. He was checked by a doctor the next day and he had not had a heart attack. He formerly had been afraid, not so much of death, but of the process of dying. He says he no longer fears death.

I know that the late Mark Chorvinsky was collecting reports of Grim Reaper apparitions, but was, lamentably, harvested before he published them. I hope that they can someday be published.

Any information on the Chorvinsky collection or sightings of Death? Deliver by psychopomp to Chriswoodyard8 AT gmail.com.