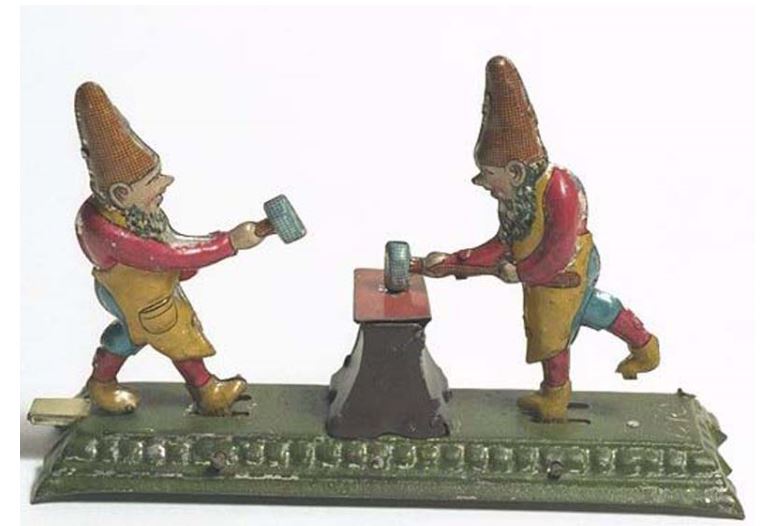 Harold the Goblin Boss. These goblins or gnomes are hard at work. Mechanical tinplate toy, 1907 http://collections.museumoflondon.org.uk/online/object/66297.html

The Fae are not always the most cooperative of creatures. Even helpful household helpers will flit if you neglect the nightly bowl of milk or offer them a suit of clothes in a mistaken moment of kindness. Gnomes and woodland fairies have a reputation for being grumpy or even malevolent. So it is strange to find a story of a child who not only sees goblins at the bottom of his garden, but finds himself a goblin overlord.

A CHILD’S VISION OF SINGULAR BEINGS.

A Seven-Year-Old Boss of a Band of Goblins.

My hostess has a little boy, Harold, seven years old, who has attracted my attention by his manly, thoughtful face and fine eyes. Also I was interested in what the mother told me of his being a most truthful, even prosaic, child in all ways but one. There is a little spot in the garden where he plays mostly, which is crowded with shrubbery, vines and flowers. He insists that this spot is inhabited by quaint little wood-nymphs, or “goblins” he calls them familiarly. In the most coherent and consecutive [sic] way, he describes their looks, their doings, their home government. He has something new to tell each day, and he says they have now received him into their councils in an official position, and that he can make them do his bidding as he wills. He can not understand why his mother can not see them. He talks to them, and interests them in various ways, and they will do any thing for him like tutelary spirits. When he loses anything and he can’t find it, he says he will go and ask one of the goblins where it is, and immediately he finds it. The other day [he] was heard to say:

“Little yellow-head, tell me what you say? What? You want to flit all day? For me, too? Never weary? Never seem to weary? Let me see you run—Run!”

He was sitting in a little chair like a young autocrat, and looking into the vines, invoking them by words and signs. He protests against its being fancy romance. He declares he sees them, and they are very small like dwarf men, and are dark, smoky-looking, but some are brighter than others. He says they know little or nothing, but they have a leader. Sometimes they quarrel and kill each other. They do not have telegraphs and railways, as we do, but they station interior goblins at a certain distance apart and messages are transmitted to a neighboring tribe in that way. A cousin of Harold’s, a little girl six years old, of whom he is very fond, has been visiting here. After the first day the cousin declined to visit that corner of the garden. She refuses to know goblins. She doesn’t believe it, for she doesn’t see them. Harold says the goblins do not like her, and but for him they would have teased and tormented her and made her cross and uncomfortable without her knowing the cause; but he stopped all that by virtue of his new position (among the little devils). The child seemed delighted because I did not laugh or ridicule this matter, but listened respectfully and interestedly.

[You can skip the next few paragraphs if you want; it’s just adults yammering about truth and philosophy, and generalized invisible beings—no goblins.]

At this moment a gentleman came in, a breezy, ruddy, English Professor at the University College; a young man, strong in philosophy and logic, to whom the hostess mentioned this peculiarity of her boy, and the act of his being unimaginative rather in the quality of his mind. The Professor asked how she met it, if she repressed or encouraged these barbarous fancies. She said she did not like to repress the boy’s confidences, but in this matter she was negative to a degree of discouragement.

The Professor said:
“We shall have to get over our horror of Bogies and inquire about its truth. We shall certainly not create them by talking about them, and if they are there, it is better for us to know it. It was an ancient and prevalent belief that beings inferior to man infest the universe, who can be summoned to his call, and will be made his servants or his tormentors, as he will.

“This belief is found in the sacred books of Hermes and in the Vedas of India. It is stated in the revelation of Lao Kiuu [Tzu], of China; is found in Chaldean Scripture, and is taught at large by Zoroaster. The Kabala is full of it. Were the ancients all wrong! It is very possible, if our eyes were open, we should be appalled at the various gradations of existence in the sub-mundane world; of embryotic, rudimentary forms of beings, dwelling in the dens and eaves of the earth, and in garden corners; beings with a kind of intelligence, like a highly organized animal, who are being developed or evoluted to a superior state by the death and consequent transition from one state to another. Perhaps if Darwin could see what your little boy professes to see we should have the master treatise of his life. Analogous to his theories promulgated in the material sphere, he might teach us the process of spiritual evolution from the most rudimentary form until it becomes progressed to a state when the particle of the Divine Soul is given.”

“In this chef d’oeuvre,” said the hostess, “Darwin might settle for us one vital point of how far these inferior beings, invisible to us, are responsible for phenomena which at present vex and puzzle one half the world, and then how the knowledge of the ancients may be made available for modern use, with reference to the governance of these goblins and other powers of the elements.”

“The ancients,” said the Professor, after a thoughtful pause, and a searching look at little Harry, “studied the hidden mysteries of nature, and plunged deeper into esoteric knowledge than we of this age; we are given over to material ends and aims, and are sunk in Cimmerian darkness nearly.”

“Oh, not quite,” answered the hostess. “These are phenomenal days—a momentous epoch. As you have said yourself, ‘the cry for new truth invariably precedes new revelations,’ and there never has been a period so deepened in intensity which demands more positive knowledge of the limits of our lies. Vague generalizations and a command to ask no further knowledge of these profound questions is not the controlling spirit of this age.”

After the sententious pronouncements by the adults in those last few paragraphs, there is a good deal more talk about philosophy, skepticism and unbelief. Huxley, Tyndall and Darwin are mentioned. Dr. William Benjamin Carpenter, who lectures on mesmerism and kindred sciences, denigrates women as “natural-twistifyers” of truth. And a clergyman suggests that “this Eastern war” seems to be “one necessary in the course of a great Order.” (I assume he means the Russo-Turkish War, 1877-78.)

I rather lost interest after the Professor horned in; it’s all a little too vague and Theosophical for my taste. I wanted to hear more about the helpful goblins and how Harold got to be their boss. There is more than a whiff of British Imperialism in his description of the goblins and his autocratic manner.

This London Letter is signed REAY. I’m not sure if this is a surname or Donald James Mackay, Lord Reay. I can’t find any information that Lord Reay was interested in Theosophy, psychic research or goblins, but there was a curious parallel in this Wikipedia note about an earlier Lord Reay and his own gang of hard-working fairies:

In the folklore of Caithness, in the Highland area of Scotland, Lord Reay is a magician who believed he had come off best in an encounter with a witch in Smoo Cave. His prize was a gang of fairies who liked nothing better than to work. The construction of various earthworks in the parish of Reay are attributed to these fairies, working under direction from Lord Reay.

However, the fairies’ appetite for work was insatiable and, eventually, their demands became intolerable. So Lord Reay put them to work building a causeway of sand across the Pentland Firth where, of course, the fierce currents wash away the sand just as fast as the fairies can build.

Other juvenile goblin bosses? chriswoodyard8 AT gmail.com who longs for a Skrat or Brownie for light housekeeping.