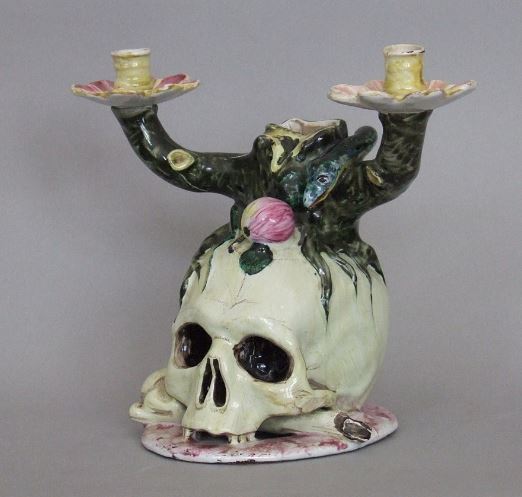 I looked out of a window the other night and saw what appeared to be a ring of fire in the woods. It got my adrenaline going—were the elementals now roasting souls?  It proved, disappointingly, to be the neighbor’s new fire-pit, which is awfully close to the fence, but it got me thinking about the distortions of flame and darkness and reminded me of the story of

Strong belief in signs which portend or give warning of imminent death is still held in many parts of the country, and in the quiet moors of Devonshire there are still many people who will tell stories in support of belief in “death lights”—a light or flame which when seen is an intimation that someone of very near kinship is passing over.

This story is perfectly genuine and was related by an elderly farmer now living among the hills midway between Lynton and Barnstaple. Mr. W__, when a young man, had working on his farm a sturdy middle-aged labourer, who, with his wife, held firm belief in “sperrits” and ghostly manifestations. The young farmer thought he would like to prove to his labourer the fallacy of “Death Lights.” Accordingly, one evening in early autumn he secreted himself near Sam’s cottage, armed with a hay fork and a newspaper. He watched the couple get into bed, a matter which, seeing that few cottagers then troubled about blinds or casement curtains, was not without its humour or interest to the young fellow. After waiting a short while, he placed the newspaper upon the fork and set it on fire. The breeze caused it to blaze furiously, but, just as he was about to hoist it up to the bedroom window, the wind took the paper off the fork and fluttered it against the window glass before lifting it high into the air, to vanish into—mere ashes.

A commotion in the bedroom was plainly heard, and the following gives but a poor idea of the rich brogue which followed:

The “Ghost-maker,” as he went to his own home, held his sides with laughter, as he thought over the excited conversation of Sam and Annie, who were perfectly satisfied of the demise of Aunt Becky.

Next morning Mr. W__ observed that Sam was unusually quiet and preoccupied, and another of the farm hands told his master that some old aunt of Sam’s wife died last night—because they both of them “saw her ‘Death Fire’ as sure as the stones on the road—go right up into the sky!”

Mr. W__ found that his experiment had been taken much more seriously than he expected, as, some days later, he heard the following story:

So sure was Annie of her old aunt’s death, that, early next morning, she set out to walk to the old dam’s cottage on the moors, some twenty miles away, in order to assist in the funeral arrangements, and to see that in the disposal of the old lady’s effects her claims were not ignored by the other relatives who were more frequently in touch with Aunt Becky.

Arriving at the cottage, Annie was somewhat surprised to see her aunt walking about her little garden enjoying the warm sunshine, and the other folk of the house engaged in the usual harvest operations. Still sure of her “intimation,” Annie proceeded towards the cottage door, whereupon Aunt Becky caught sight of her, and, possibly, because in some uncanny way she sensed the reason of the younger person’s visit, cried out: “Goo off, Annie, ye shan’t hae anything, I bayn’t dead ‘et.”

Unabashed, Annie marched into the cottage, convinced that if Becky was not yet deceased, well, it could not be long delayed, and seized hold of a heavy copper coal vase and tongs, much esteemed by Becky and evidently coveted for some time by Annie. The old lady offered vigorous and voluble resistance, but the younger woman was an easy winner and walked off to her own house in triumph, firmly believing that as the manifestation was so clear Aunt Becky’s end could not be long in coming, and doubtless satisfied to think that now the other relations could never have all Aunt Becky’s humble effects.

First off, the insufferable young farmer, so anxious to rebuke superstition in his employee, could have easily burnt down the cottage and the couple with it. I wonder if the truth of the matter ever got back to them? Somehow I suspect that the window-peeping setter of death-lights slunk away into the darkness and kept his mouth shut. Coward.

Secondly, did Aunt Becky ever go to law or send a hefty friend over to take back her belongings?

Thirdly, why is fire so often a token of death? If it symbolises the Life Force, it ought to be flickering and going out, yet it blazes away in swamp, lonely road, and graveyard.

In Scotland there is the Dreug:

Dreug (prounced drayk), which means, meteor, falling star, or fireball, is also used in connection with ghostly lights in the night sky, which portend death. A woman from South Uist told me that only recently she saw these death-lights like the tail of a comet come to rest over the house on the night her brother died. In Tiree they are also called teine-sithe—fairy fire—and…these were witnessed by Father Allan McDonald in Eriskay. Ravens and Black Rain The Story of Highland Second Sight, Elizabeth Sutherland, pp 40-41

Wales, in particular, has long known various kinds of corpse candles. One of these, the “Tanwe” has a curious resemblance to Mrs. Jones’s “Lights.” [The Egryn Lights.] It appears in the lower regions of the air, and is distinguished from a falling star by its slow motion. “It lighteneth all the air and ground where it passeth, lasteth three or four miles or more for aught is known, because no man seeth the rising or beginning of it; and when it falls to the ground, it sparkleth and lighteth all about.

But though Mrs. Jones’s “Light” like the “Tanwe” stops over particular houses, the former is supposed to mark the birth to new life, while the latter foretells a death. The Occult Review June 1905: p. 291

The Corpse Candle is always and invariably a death-warning. It sometimes appears as a stately flambeau, stalking along unsupported, burning with a ghastly blue flame. Sometimes it is a plain tallow ‘dip’ in the hand of a ghost, and when the ghost is seen distinctly it is recognised as the ghost of some person yet living, who will now soon die. This, it will be noticed, is a variation upon the wraith, or Lledrith. Sometimes the goblin is a light which issues from a person’s mouth or nostrils. According to the belief of some sections, the size of the candle indicates the age of the person who is about to die, being large when it is a full-grown person whose death is foretold, small when it is a child, still smaller when an infant. Where two candles together are seen, one of which is large and the other small, it is a mother and child who are to die. When the flame is white, the doomed person is a woman; when red, a man. British Goblins, Wirt Sikes, 1881: p. 239

We’ve previously looked at the Death Fires of Madagascar, which predicted a royal death, the death-flame omen of a miner, and some dangerous spook lights.

Other examples of death fires? Send to chriswoodyard8 AT gmail.com, who is standing by with a bucket of water.