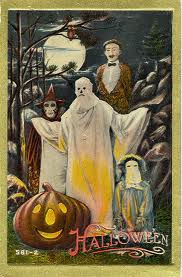 Ghost Fires and Melting Masks: The Macabre Mirth of the Vintage Hallowe’en The Ghosts of Halloweens Past.

It’s Beggar’s Night here in my town and some people worry about making Halloween safer and healthier. To that end, my neighbor gives out pencils to trick-or-treaters. I prefer unhealthy treats like M&Ms and KitKats. After all, a child could put an eye out with a pencil. Safety first.

But it was not always thus.

A boy is crushed during a Halloween out-house tipping; blinded by a Halloween mask, a girl drives into the path of a train; a child is killed by a falling pumpkin.  Halloween has always been an inherently dark, dangerous, and unwholesome holiday.

The social columns of vintage newspapers are filled with fascinating snippets like “A pretty tea was given by Mrs. A.P Clawhammer for her friend Miss Margaret Pruritis of Dismal Seepage, Iowa.”  These news items burble along in a predictably restful pattern, listing the decorations, the refreshments and the entertainments at local parties. As I was researching the topic of vintage Halloween disasters, I found these two Halloween items in the social column of a Georgia newspaper and was struck by their casual cruelty side by side with the genteel details.

The Philathea Class [this was a Bible study group] of the First Methodist Church entertained at a most successful Halloween party on Friday evening in the church parlors.

Their guests included the members of the Baraca Class, and the officers of the Sunday School and their wives.

Autumn leaves, pumpkins and chrysanthemums were used in decorating, carrying out the Halloween idea.

The ladies of the class, garbed as ghosts, welcomed them into the parlors, where many surprises of a fearful and spooky nature awaited them. On shaking the hand of Miss Daisy White, president of the class, so cordially offered them, the unsuspecting guests (or victims) were given a severe and agonizing shock. A small electric shocking machine explained this mystery. This was one of the most amusing incidents of an eventful evening.

The house and spacious veranda were very artistically decorated with autumn leaves, black cats, owls, ghosts and witches, which gave the interior such a weird aspect, one felt as if he were really in the land of Goblins.

The veranda and interior were illuminated with Jack o’ lanterns, and two large pumpkins were placed at the entrance, and were very attractive, with large faced cats on each side with candles lighted in them, defining the features.

The children were entertained throughout the evening by various games suggestive of the season, and fortune-telling….

The most remarkable event of the evening was a real live black cat coming to take part in the Hallowe’en celebration, but the little cat died next morning and Miss Burt was accused of poisoning it as she was told by several friends she would surely be an “old maid” if she should keep it. Marietta [GA] Journal 7 November 1919: p. 7

Although there were no razor-blades in apples or poisoned candy, Halloween fatalities were an expected part of the fun. Some newspapers published lists totting up Halloween victims from all over the country. Alcohol and firearms figure heavily in most accounts, but you also find macabre accidents:

Columbus, O., Nov. 1 An unknown man was run over by a Main Street car, shortly before 3 a.m. today, and instantly killed, being terribly mangled. The motorman saw the body lying across the track as he approached, but supposed it to be a Halloween dummy. There was nothing on the body by which it might be identified. Plain Dealer [Cleveland, OH] 2 November 1904: p. 4

ORANGE, N.J., Nov. 13. Little Freda Henke, the fourteen-year-old daughter of Mr. and Mrs. Otto Henke of 24 Church Street, this city, is dead at her home as a result of blood poisoning contracted by wearing a papier mache mask at a Hallowe’en party she recently gave a number of her young friends.

At the party all the children wore masks, and there was much romping. The perspiration on the girl’s face melted the paint on the mask and this contaminated an abrasion on her upper lip. New York Times 14 November 1902.

Fire was a constant theme in the Halloween celebrations of the past. For example, in 1906 an entire Leipsic, Ohio city block, to the value of $100,000, went up in flames because of a Halloween paper lantern mishap. Lives were frequently lost when costumes were ignited by jack-o-lanterns or candles. A Halloween dance could become a Dance of Death, especially when a Ghost Fire was involved. At an April 1908 “Ghost Dance” in New York, a young woman was burnt to death when the alcohol in the following ritual exploded.

Would You Know Whom you Are to Marry?

Then Build a Ghost Fire on Hallowe’en.

…For centuries young men and maids on the eve of All Saints’ day have invoked ghostly information as to their futures.

There are many methods of doing this—such as holding a candle lighted mirror over your head and walking backward down a crooked stairway as the clock strikes midnight. If you are a girl the apparition of your future husband will cloud the mirror’s surface. If you are a man vice versa….But the oldest as well as most mirth-provoking mode of procedure is the ghost fire.

A ghost fire is made as follows:

A big dish pan is placed in the center of the floor of a dark room. The pan contains some four or five pounds of salt which has been fairly well saturated with wood alcohol. The party gathers around the pan, chanting the incantation quoted above. Each has been given a chestnut, and each chestnut has been marked in some distinguishing way. A lighted match is thrown on the salt, which breaks into a blaze that gives off an uncanny green light. The chestnuts are then thrown in, and the girl whose chestnut pops first will be the first bride. Of course, she must immediately eat the chestnut. BUT—that is not all.

She is supposed to see the face of her future husband arising from the flames! Wyoming State Tribune [Cheyenne, WY] 31 October 1919: p. 7

My friend Nick Reiter of The Avalon Foundation had this to say about what seemed to me a dubious indoor entertainment:

“First off, the amount of alcohol needed to soak 4 pounds of salt is a lot of alcohol. The fire from that wouldn’t so much be explosive, but rather hot and very long lasting. It would be difficult to put out. It would also make the pan hot enough to burn the hell out of the floor….

“Wood alcohol is methanol – not ethanol as in booze, or isopropyl as in rubbing alcohol. They all burn about the same, but wood alcohol is very toxic, both in fume and in ingestion. I would not have wanted to eat a chestnut [roasted that way.]”

A different sort of Halloween divination proved fatal to a Pennsylvania woman:

BECAME THE BRIDE OF DEATH.

Sharon, Pa., Nov. 6. A very peculiar case has come before the local physicians in this city. Miss Luelia Minner, of Charleston, this county, attended a Halloween party, and the guests indulged in familiar Halloween legends. Miss Minner had heard that if a young lady would swallow a chicken’s heart her future husband would be the next gentleman she would meet. The girl tried the experiment and the heart lodged near the windpipe and caused an abscess to form in the throat. She kept gradually growing worse until today, when the matter broke forth and emptied into the windpipe, choking her to death. Deceased was 21 years old and a popular young society lady. Daily Inter Ocean [Chicago, IL] 7 November 1895: p. 1

Halloween pranks could turn out to be deadly for the pranksters, who were particularly at risk for being shot by irate householders.

As a result of a Hallowe’en prank two men were shot at Shelby, O., and both may die. Floyd Armstrong and Morris Brower placed cannon crackers in the spouting at Roscoe McCormick’s house. McCormick fired both barrels of a shotgun with deadly effect. Recorder [Indianapolis, IN] 10 November 1900: p. 5

Or the victims, as in this extraordinary story:

A searching party found a wire leading from the ground to a tree top, to which was attached a skeleton by a pulley.  New York Times 2 November 1900: p. 5

A very happy and safe Hallowe’en to all of you. Dibs on the KitKats.