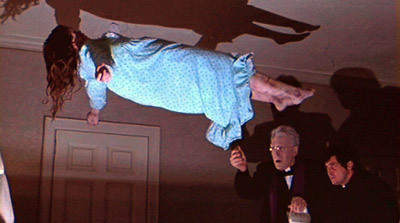 Polt or Possessed on Prince Edward Island? The possessed girl’s levitation scene from The Exorcist.

Rather a busy day here, so a quick look at a Canadian case of a young woman who was the focal point of fiery poltergeist activity or, possibly, possessed.

POSSESSED OF A DEVIL,

The simple Acadian French farmers of New Zealand, a small settlement about five miles from Souris, at the extreme eastern end of Prince Edward Island, have been thrown into a state of intense nervous excitement by a series of weird and supernatural phenomena surrounding a young woman named Chinene. The ignorant French farmers believe the girl possessed of a devil, and Rev. Father Walker, of Rollo Bay, the parish priest, has been importuned to perform the ceremony of exorcism once resorted to by the Catholic Church for the purpose of curing one possessed of devils. To others more versed in occult demonstrations the unfortunate girl presents a study rivaling in interest the case of Mme. Palladino.

The Chinene girl is about 20 years of age. Since the death of her parents, a few years ago, she has been keeping house for her brothers, small farmers of New Zealand. Several months ago the eldest brother informed his sister that he intended to marry a young woman in the neighborhood. Miss Chinene, on hearing the announcement, burst into a fit of rage and declared that she “would as soon have a devil in the family as that girl.” That very night, after the members of the family had retired, the household was aroused by loud and unexplainable noises, which seemed to come from all parts of the house. Then the voice of the girl, shrieking in agony, was heard from her room. The brother, fearing his sister was being murdered, rushed to the girl’s room, followed by other members of the family. When they opened the door, they declare, they saw the young woman floating in the air several feet above the bed. She was talking incoherently and in language much different from that used by her in ordinary conversation. The girl finally sank back on her bed and fell into a natural sleep. When she awoke the next morning she knew nothing of the occurrence, and her brothers were almost convinced that they themselves were suffering from delusions. But night after night the same performance was repeated.

News of the happenings soon leaked out among the French farmers, and these simple people became to believe that the girl, by her sacrilegious remark, had given herself over to the evil one.

Despite the natural reluctance and fear on the part of the neighbors curiosity soon got the better of them and nearly every person in the settlement visited the Chinene home to see the girl. The peculiar phenomena continued and most of the people in New Zealand can bear witness to the strange occurrences, for which they can offer no explanation.

The girl developed clairvoyant powers while in what seemed like a hypnotic trance, and those powers added to the bewilderment of those who came to see her. She told her visitors how much money they had with them and she was also able to repeat the addresses and contents of letters in their pocket.

The unexplainable noises which attended her first demonstrations of occult powers accompanied her hypnotic trances. The noises are described as beginning with a rumbling sound like distant thunder, increasing steadily in intensity and volume and finally resembling the muffled blows of padded boxing gloves, then gradually dying away again. These demonstrations did not take place every night, but at repeated intervals, sometimes several nights in succession.

Several French farmers are willing to swear to having seen the devil himself in the vicinity, but these visions are laid to overheated imaginations and the contraband stimulates obtainable in “dry” territory.

Regarding this strange case credence must be given to the testimony of many responsible people, including a number of reputable physicians, who have been consulted in regard to the young woman’s condition. The local doctors were called in to treat the girl, but could do nothing. Next the parish priest’s assistance was sought, but earnest prayers seemed to be unavailing. Meanwhile, the excitement in the neighborhood became so intense that Father Walker issued a notice to his parishioners forbidding any further visits to the home of the young woman.

To the devil, in possession of the girl, the neighbors have ascribed a number of disasters which have occurred recently without any apparent cause. The principal events of this nature were three fires which destroyed neighboring barns, one of them owned by the girl’s uncle, and in which a great quantity of live stock perished.

Goaded on by the loss of property for which their sister was blamed by the neighbors the Chinene brothers took more active steps in search of a cure, and several physicians were summoned from this city for consultation. Among them was Dr. Peter Conroy, one of the best-known practitioners in the province and the chief of staff at the Charlottetown Hospital. Dr. Conroy declares that in the Chinene girl’s case nothing has happened which cannot be explained by science. His personal theory is that the young woman is an auto-hypnotic with “obsessive influences.” To put it more simply, a fixed idea produces a hypnotic condition automatically, leaving the mind under no control. He also advances the theory that by involuntary hypnotism Miss Chinene creates delusions in the minds of those around her. Insanity, rising from jealousy of her prospective sister-in-law, which preyed on her mind, is also put forward by the physician as a possible explanation.

Others who have taken a scientific interest in the case are not satisfied with the theories of Dr. Conroy and his brother physicians, and an investigation by persons trained in psychology and occult sciences would be welcomed.

Some have advocated the ceremony of exorcism provided by the Catholic Church for those believed to be possessed of devils. Before now the clergy in the maritime provinces have been called upon to perform this ceremony, the last case being that of a young woman at Caraquet, N.B., who several years ago gave evidence of a similar trouble. The long and solemn service was performed with great care, and in that particular case a cure was reported.

All efforts to relieve Miss Chinene having been unavailing, her health has given way under the strain to which she has been subjected even in her normal moments. As nothing could be done to help her in her own home, she was brought last week to the Falconer Hospital for the Insane in this city, where she will be given every care and attention that medical science can command with a view to ridding her of the strange influences which have been wrecking her life.

I can find no record of a Chinene family, but there were dozens of members of the Ching family in the 1911 P.E.I. census. [All the Ching’s Christian names were European, so perhaps not an actual Asian surname?]  Today we might blame the mysterious incidents on a poltergeist triggered by jealousy or look into abuse of the young woman by her brothers. She exhibits the telepathy of the polt-vector and the amnesia of the dissociative. The levitation (if not mere misperception) is rather trickier to explain. The recent Indiana possession case and the Enfield Poltergeist case both featured levitation. The levitation and speaking in unknown languages suggest a text-book case of possession. The author of the article seems reluctant to credit this possibility. He  makes the usual comment about “spirits” being behind it all and sneers at local superstition. However, he rightly suggests Palladino-like phenomena and/or trickery. Father Walker wisely limited the attention the girl was getting. And Dr. Conroy seems to have been rather forward-thinking in his suggestion of auto-hypnosis.

It was a decade later that similar racketings and fires broke out at Antigonish, about 125 miles as the crow flies from New Zealand, P.E.I. What came to be called the “Fire Spook of Caledonia Mills” was investigated by Dr. Walter Prince, who came to the conclusion that Mary Ellen MacDonald, the teenaged foster-daughter of a farming couple, was setting fires and causing other disturbances in a dissociative state. Mary Ellen, too, ended up in an insane asylum, at least for a time. I’ve written about Dr. Prince’s Antigonish investigations here. And about his own polt-vector adopted daughter, here.

Does anyone have any further information about the case at Caraquet, N.B. or of the fate of the unfortunate Miss Chinene? Waft to Chriswoodyard8 AT gmail.com