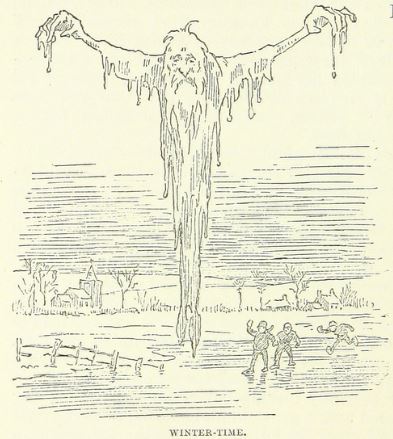 Recently, while investigating those unlucky houses, I ran across these strange stories of accursed water haunted by the spirits of suicides. Ghosts of drowning victims are not unknown, but these beliefs about hoodoo-triggered suicides were new to me. We’re at Port Clinton, Pennsylvania, on the Schuylkill River and the year is 1917, well beyond the superstitious nineteenth century, yet the local residents

Frozen solidly in the ice in the dock at Port Clinton, is the hat of William Glassmier, who on the morning of November 24th, last, committed suicide by jumping into the waters of the dock.  For years past the people of Pt. Clinton have been cutting their ice from the dock and storing it in ice houses for consumption during the hot summer months. This year they have refused to cut a single pound of this necessity, believing that the spirit of Glassmier still lingers in the frozen water and that when the ice melts sufficiently this spirit will venture forth to again walk the streets of the community. No one in the town has had the nerve to attempt to cut any ice from the dock and just so long as the hat of the deceased remains in the water, just so long will the people avoid its use.

The scarcity of ice now confronts a number of the residents of the town and during the summer time when ice cream is being offered for sale, the person selling the same must swear that it was made by ice taken from any other place but the dock. Likewise the person who goes into the hotels to quench their thirst, the beverages must not be cooled by any dock ice. No haunted ice for the residents of Pt. Clinton, now or at any other time. In all probability this will be handed down for the next several generations and as a consequence, there will be no swimming during the summer and no ice cutting during the winter.

Old residents of this section relate a wonderful story of how misfortune followed a family from the eating of a number of fish, the fish having been caught in a stream wherein was found the body of a man who distracted over financial worriment, had found relief in the waters of this creek or stream. The fish were of the white pike variety, and were caught by the head of the house, following a rain storm that had set in after a very warm day. As the fish were caught, they were placed on a string until a sufficient number had been caught. These fish were then carried a distance of nearly a mile to the home of the fisherman and to all intent were dead, dead as salted mackerel.

The following morning when the housewife was engaged in cleaning them, the knife slipped and severed a finger. A son who was helping a neighboring farmer, was run over by a hay wagon and instantly killed. The day of the funeral the father and fisherman, sustained two broken legs while walking down the hill of the cemetery and less than a week later, the family were compelled to flee for their lives when their home was destroyed by fire as were several of the outbuildings. All this misfortune was laid to the fish that had been caught in the waters wherein the man had committed suicide. Whether or not this story if known to the residents of Pt. Clinton and they fearing similar misfortunes, is not known, but one thing is certain, they will take no unnecessary risks.

Another family decimated by a “hoodoo” said to be caused by a suicidal drowning. Obviously if the body had been in the water for weeks, nibbled on by the local pike, there would be a certain squeam-factor, not to mention a possible health issue. But Glassmier’s body was pulled from the water almost immediately, as we’ll see in the next article. Yet what was said to have been his hat became the focal point of local fears. Or was it the peculiarly vile circumstances of his death that made people fight shy of the ice, so essential to the local economy?

Initially I wondered if Glassmier had had dementia, because the act of self-destruction seemed so random. Then I found this article, which gives a dire motive.

William Glassmier, aged between 60 and 65 years, a resident of Port Clinton, committed suicide shortly after eight o’clock this morning, by jumping into the waters of the old dock, but a short distance away from his home. According to the information given The Call, it is alleged that Glassmier had committed rape upon several young girls of Pt. Clinton, all of whom were between the ages of 10 and 14 years.

Information was furnished to the State police who worked up the evidence against the man. A warrant was sworn out before a Pt. Clinton justice of the peace charging Glassmier with the offense. The warrant was placed in the hands of Constable [Welsey] Hogan, of Pottsville, to be served. Hogan left Pottsville on the early train this morning and arriving in Pt. Clinton easily located his man. The warrant was then served.

After the reading of the warrant, Glassmier asked to get a little breakfast and the constable granted the request. Going into a rear room, Glassmier bolted through the rear door and ran to the dock and plunged overboard. The constable did not discover the loss of his man for several minutes, and when he investigated, found several people pulling the dead body from the icy waters. It was laid along the bank to await the arrival of deputy coroner Robinhold of Auburn.

Glassmier conducted a little candy store at Pt. Clinton for a number of years. People who have known him for some time claim he was not responsible for his actions. He leaves an adult family to survive.

An accused pedophile with a candy store. Lovely.  Then, as now, there were people willing to excuse his behavior.  I could find no further information as to his mental state.

1917 is, as I remarked, a bit late to find such an anomalous belief, although the town was small and remote. I dove deep for similar aquatic jinxes, but came up gasping and empty-handed in the search for the demd, damp, moist, unpleasant body.

Any other examples of clammy curses? chriswoodyard8 AT gmail.com.