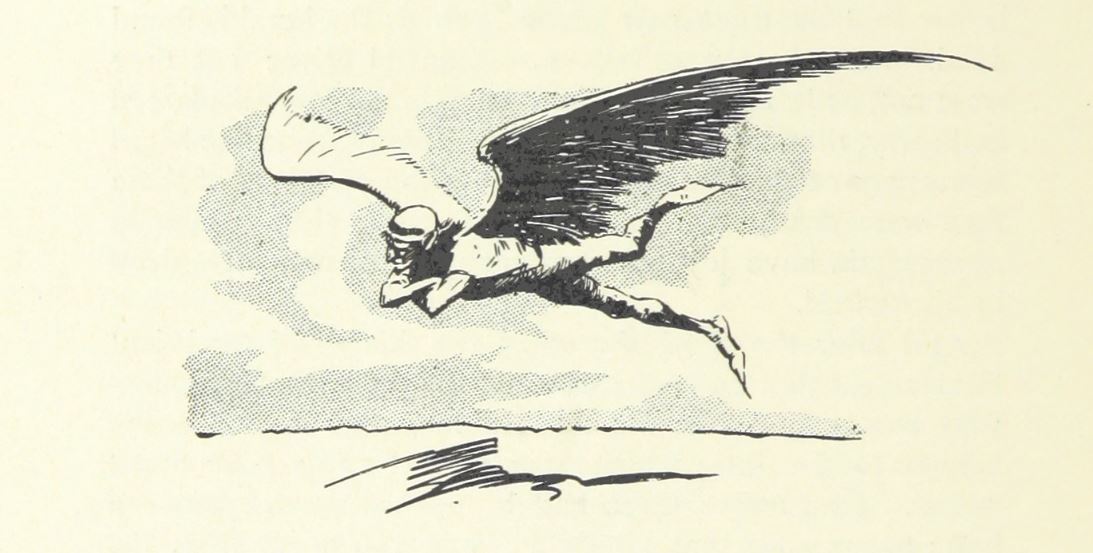 Lord of the Fliers The Devil flies out in search of souls.

After hours on the phone with engineers who do not speak Humanities Major trying to exorcise my computer gremlins, I’m just winging it…. Here are three brief medieval stories of levitation associated with the Lord of the Flie[r]s.

Among the Evil One’s many talents was the ability to make men fly; or, perhaps, to believe that they could fly. Once again we hear from our old friend, Master of Novices, Caesarius of Heisterbach, instructing a novice in the wiles of demons.

Of a man who leapt from a tower in Soest, trusting in the devil’s aid, and was killed.

To this same town, as was told me by Master Gozmar, a pious man, and canon of S. Patroclus, came a certain stranger, who said that he purposed to leap from the tower of S. Julian, which is very high, if some honour might be gained by it. The citizens, like sensible men, replied: “We shall give you nothing for this, because it simply means that you will kill yourself.” Then he said: “I shall do it for the honour of the town.” A great number of people collected in the marketplace where the tower stands, and many others looked on from the windows of the neighbouring houses, while he went up the tower. Then somebody cried out from behind: “Tell me, my good sir, what demon are you employing to help you in this?” and when he had given the name of some demon, the other called: “You may be perfectly certain that he will deceive you, for he is a thorough rascal. If you were to trust yourself to Oliver, he would not betray you, because he is a responsible demon, and knows how to keep faith.” The other answered: “I am quite sure my demon will not deceive me, because I have often had experience of his faithfulness.” I think that this Oliver was the same of whom we spoke above in the fourth chapter. To make the story short, the man climbed the tower, leapt from it, came to the ground, and lay still where he fell. The crowd wondered why he did not get up, for they thought that the ample cloak he was wearing to catch the wind would have saved him from injury; then some drew near and lifted him up and found that all his bowels had gushed out. See how the devil rewards his servants, both by killing their bodies and by thrusting down their souls to eternal pains…”

Despite a disastrous ending to this leap of faith, I find myself charmed by that earnest recommendation of a reliable demon: “If you were to trust yourself to Oliver, he would not betray you, because he is a responsible demon, and knows how to keep faith.” Caesarius tells several other stories about obliging demons oddly ready to lend a taloned hand to humans, not unlike Froissart’s helpful Horton.

But another of Caesarius’s demons was not as benign.

“Of a bell-ringer whom the devil carried to the pinnacle of the Castle of Ysenberg.”

In a town called Amel, in the diocese of Cologne, it happened a few years ago that there was a bell-ringer living under the vow of a certain pilgrimage and he had agreed one day with a woman of the same town that they should make a start together the next morning; and she asked him to ring for matins a little earlier than usual that they might set out before the sun grew too hot, and he promised to do this. That night the devil came to his bedside, shook him and said: “Ring for matins,” and so went away. He immediately got up and saw a light burning in the church, but when he learnt that it was not yet cock-crow he thought that he had been aroused by the aforesaid woman and left the church meaning to tell her to go back to bed, because it was too early yet. He looked for her everywhere but could not find her, but noticed a black ox standing opposite him. This animal put out its tongue and with it took hold of the man and mounted him upon his back, flew through the air with him and set him down on a pinnacle of the tower of the castle of Ysenberg. Then he said to the man: “Are you afraid at all?” and the other replied: “It is by God’s permission that you have been able to bring me here and there I nothing that you can do against me except what He permits.” The devil said: “Do me homage and I will set you down safety and also give you great riches; but if you refuse you shall either die here by hunger or else be dashed to pieces by falling headlong.” To whom the bell-ringer, putting his trust in Christ, replied: “I adjure you in the name of Jesus Christ to do me no injury, but to put me down without any harm to my body.” Immediately the devil took him and set him down very roughly in a field near the town of Gerresheim before the dawn of day, which day happened to be the anniversary of the dedication of the church of that town. At dawn, men hastening with torches to the service of matins found this bell-ringers in a field in a fainting condition; and when they had revived him and had heard his story they were greatly astonished. On the fourth day indeed he returned to his house and related to all so fully the position both of the towns and buildings, which he had never seen before, that they could not doubt that he had been really carried away.

The Devil obviously knew his Scriptural references, paraphrasing Matthew 4:9 to his own purpose.

This last story has the ring of a well-known urban legend:

Peter of Cluny (Liber Miraculorum II, I.) tells the following as a warning to heretics. A certain Count of Macon was sitting in his palace on the town’s patronal festival with a large company of soldiers and others around him, when suddenly a stranger on horseback entered the palace gate and, as they all looked on in wonder, rode right up to the Count. When he had come near him, he said that he wished to speak to him, and not so much asked as commanded him to arise and follow him. Compelled by some unseen power and unable to resist, the County arose and went to the palace door where he found a horse ready for him. He was bidden to mount, and did so; whereupon the man seized the reins and in the sight of all began to carry him swiftly up through the air. The whole town ran up at his loud crying and wretched lamenting to see him flying through the air for as long as their eyes could follow him. They heard him for a long time crying out: “Help, citizens, help!” But they could not help him, and he was taken from the sight of men and became, as he deserved, an eternal associate of the demons. So did this man expiate in this life and the next his despoiling of churches and his sacrileges.

The man crying in the air “Help, citizens, help!” suggests a prototype of the vanishing fictional characters David Lang and Oliver Lerch, witnesses heard calling from above. I was also reminded of the Arabian Nights tale of the flying ebony horse.

For a 17th-century story of levitation see Some Discontented Daemon, which also mentions the bell-ringer snatched by the Devil.

Other early levitations? (besides saints, which may be taken as read) chriswoodyard8 AT gmail.com.