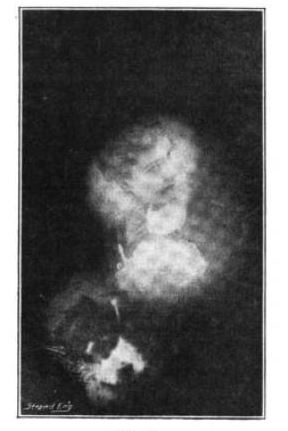 The Photograph of a Spectral Dog The spirit photo of the ghostly lady and the sitter’s spectral dog.

THE PHOTOGRAPH OF A SPECTRAL DOG.

A materialist (born of Catholic parents) became considerate of liberal religious opinion through the teaching of Unitarianism, and by its humane precepts investigated theories concerning life beyond the grave. This whole-souled doctrine, with its beauty of thought and moral blessings, reaches the ideal. But it does not furnish positive proof to the critical and exacting mind of the continuity of life.

After careful and conscientious study of spiritualism for seven years, there came proof in the form of tests from honest mediums. A member of a good Methodist family often spoke about a beautiful lady and a dog that could be seen and heard when the infidel was present. The animal would bark and jump with delight at the sound of his master’s voice. He would open the latch-door of a country home, and do many things that were his custom in earth-life, evidently trying to make his presence known to his master.

The lady’s spirit usually appeared in a white dress trimmed with lace. On one occasion she was requested to appear in a different costume and bring the dog to have their photographs taken. The only reply made to this request was a happy smile. Mr. Wyllie, the photographer, had no knowledge regarding the results desired, and objected to placing a vacant chair beside the subject, saying it might ridicule his work. The prime object was to get a picture of the dog sitting in the chair beside his master. A face and bust picture of the lady’s spirit in her customary dress appeared in the place intended for the dog (photo enclosed herewith, No. 1). 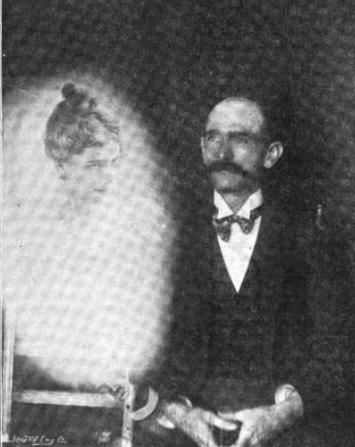 The Photograph of a Spectral Dog The first spirit photo with an empty chair for the dog.

A second trial was made two days later. The subject stood beside a background, with the camera focussed upon the same. After exposing the plate, the operator and subject entered the developing-room, and found upon the negative a portrait of the lady in a different dress and a coveted picture of the dog. [Photograph at head of post].

This infidel does not expect one sin of his life will be mitigated or forgiven, and he swears the portrait is of a dog that he owned in New England, and was killed there eighteen years ago. Friends of this man in early life, who knew the dog well, substantiate the truth of this statement. There could not have been any fraud practised, as there never was a portrait taken of the dog in earth-life.

The “spirit photograph” of a person who never had a likeness taken in real life is a recurring motif in the history of Spiritualism and something that can be difficult to explain away. While it is certainly possible that some of the subjects had been photographed, allowing an unscrupulous operator to add them to a blank plate, there are dozens of stories like this. One wonders if there was a file of local images shared with traveling mediums, just as there were files of useful seance data. But does that explain every single “spirit” portrait of someone previously unphotographed?

When they are not obviously images of people draped in muslin or cheesecloth, “spirit photographs” so often look like a photograph of a cut-out, or of another photograph, or of a drawn or painted portrait–they have a completely different appearance than the living sitter.  From our perspective it is hard to see how they fooled anyone. Some Theosophists, offering a more earthly explanation might say that the sitter was projecting a “thought form” onto the plate. Of course the exact mechanism for such a thing is never explained.  I previously told of a “spirit painting” of a young girl who had never had a likeness taken. Here is another example: a shortened version of a similar story of a spirit photograph. The rest of the story consists of affidavits before a notary public from the witnesses.

IN LIFE HE HAD NO PORTRAIT

William H. Andrews of Washington Says Brother Killed on Dewey Farm in Richland Township in 1857 Is Original of Picture—Who Recognizes It?

Did you ever see a photograph of a spirit?

Scores of readers of this issue of The Gazette will be in a position to either affirm or deny the statement of W.H. Andrews, a former Richland man, that the photograph reproduced herewith contains a faithful likeness of his brother, Marvin Andrews, who was killed by felling a tree upon himself during the year 1857, at the Dewey farm near Richland. The original photograph is to be soon in this office. It was taken on November 12, 1905, in the studio of W.M. Kealer, 1343 Euclid street, Washington, D.C., and was posed by W.H. Andrews. About him on the photograph appear grouped the portraits of a number of men, whom he and his cousin, H.H. Andrews, identify as the likenesses of the brother, father, and three uncles of the former.

More curious still, Marvin Andrews never had a photograph taken and his father had none taken since 1881, while the likeness was that of at least 20 years later, when he son last saw him. Kalamazoo [MI] Gazette 14 July 1907: p. 12

The lady pictured in the two portraits above seems to have the same face with a slight angling of the head and perhaps a new garment painted on. One theory about the dog’s appearance is that the photographer knew what kind of dog it was and used an image of the same breed of dog. Yet markings differ even if the breed was correct;  it was a risk that the “infidel” would know it was not his dog. Perhaps it was a risk a spirit photographer was willing to take.

Finally, a very peripheral and somewhat muddled observation about photos. As an historian, I have noted that there is sometimes a curious issue with photographs in historic houses. More than once I’ve been shown a photo described as “Aunt Emily, who died in 1801.” The “photo” is actually a photograph of a painting of Aunt Emily. To me, it looks like a painting that has been photographed, but the medium of photography seems to blind some observers to the actual content. The same misunderstanding has happened with photographs of older images, like ambrotypes, frames and all. If the subject is in a photograph, it IS a photograph, not a photo of a different sort of image. What this might have to do with spirit photography, I haven’t an earthly. It may explain why people identified extras found in “spirit photos” as original likenesses.

Any other examples of spirit pictures of people who had never previously had a likeness taken?  Send snaps to Chriswoodyard8 AT gmail.com