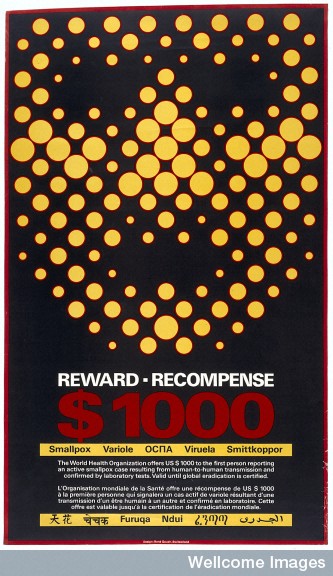 The Disease Elemental with Yellow Spots Image from The Wellcome Collection showing a yellow face made of smallpox pustules, offering a reward for notification of symptoms.

I’ve been a bit under the weather lately, so possibly the urge to report on sinister disease-phantoms arose in some fit of delirium. We previously heard from the lurid Mr. O’Donnell on this same subject in “A Mass of Fetid Jelly: The Ghost of a Germ.” Here he relates a childhood experience.

Mr. Elliott O’Donnell—a man about whom it has been said that “the gates of his soul are open on the Hell side,” has had many strange experiences with spirits, mostly evil and horrible, and has recorded these in his books “Ghostly Phenomena,” “Byways of Ghostland,” etc. From his voluminous writings on his own personal experiences, I cite a [case], to show the character of the phenomena:

“I have, from time to time, witnessed many manifestations which I believe to be super-physical, both from the peculiarity of their properties, and from the effect their presence invariably produce on me—an effect I cannot associate with anything physical. One of the first occult phenomena I remember, appeared to me when I was about five years of age. I was then living in a town in the West of England, and had, according to the usual custom, been put to bed at six o’clock. I had spent a very happy day, playing with my favorite toys—soldiers— and, not being in the least degree tired, was amusing myself with planning a fresh campaign for the following morning, when I noticed suddenly that the bedroom door (which I distinctly remember my nurse carefully latching) was slowly opening. Thinking this was very curious, but without the slightest suspicion of ‘ghosts,’ I sat up in bed and watched.

“The door continued to open, and at last I caught sight of something so extraordinary that my guilty conscience at once associated it with the Devil—with regard to whom I distinctly recollected to have spoken that afternoon in a sceptical, and I frankly admit, very disrespectful manner. But far from feeling the proximity of that heat which all those who profess authority on Satanic matters ascribe to Satan, I felt decidedly cold—so cold, indeed, that my hands grew numb and my teeth chattered. At first I only saw two light glittering eyes that fixed themselves upon me with an expression of diabolical glee, but I was soon able to perceive that they were set in a huge, flat face, covered with fulsome-looking yellow spots about the size of a threepenny bit. I do not remember noticing any of the other features, save the mouth, which was large and gaping. The body to which the head was attached was quite nude, and covered all over with spots similar to those on the face. ] cannot recall any arms, though I have vivid recollections of two thick and, to all appearances, jointless legs, by the use of which it left the doorway, and gliding noiselessly over the carpet, approached the empty bed, placed in a parallel position to my own. There it halted, and thrusting its misshapen head forward, it fixed its malevolent eyes on me with a penetrating stare. On this occasion, I was far less frightened than on any of my subsequent experiences with the occult. Why, I cannot say, as the manifestation was certainly one of the most hideous I have ever seen. My curiosity, however, was far greater than my fear, and I kept asking myself what the thing was, and why it was there?

“It did not seem to be composed of ordinary flesh and blood, but rather of some luminous matter that resembles the light emanating from a glow-worm.

“After remaining in the same attitude for what seemed to me an incalculably long time, it gradually receded, and assuming all of a sudden a horizontal attitude, passed head first through the wall opposite to where I sat. Next day, I made a sketch of the apparition, and showed it to my relatives, who, of course, told me I had been dreaming. About two weeks later I was ill in bed with a painful, if not actually dangerous, disease. I was giving an account of this manifestation at a lecture I delivered two or three years ago in B__, and when I had finished speaking, I was called aside by one of the audience who very shyly told me that he too had had a similar experience. Prior to being attacked by diphtheria, he had seen a queer-looking apparition which had approached his bedside and leaned over him. He assured me that he had been fully awake at the time, and had applied tests to prove that the phantom was entirely objective.

“A number of other cases, too, have been reported to me, in which various species of phantasms have been seen before various illnesses. Hence I believe that certain spirits are symbolical of certain diseases, if not the actual creators of the bacilli from which these diseases arise. To these phantasms I have given the name of Morbas. …”  True Ghost Stories, Hereward Carrington, 1915

Some interesting notions here–that spirits can either symbolize a disease, presage illness, or actually infect humans. From a strictly folkloric point of view, if there are such things as tokens or omens of death, and if ghosts sometimes come to warn of an approaching dissolution, why should there not be apparitions that warn of disease? From a medical point of view, many diseases are heralded by a number of small symptoms, which are only recognized as prophetic after the patient is truly sick. Are the “Morbas” merely a subconscious warning system for early symptoms? I’ve known people who consistently had bad nightmares before the onset of illness. Was their body trying to tell them something–and did O’Donnell and the diphtheria patient experience a (possibly) waking version of this? There is also the possibility that O’Donnell might have been sickened by the shock of a frightening apparition rather than already ill and seeing monsters. Or are the “Morbas” a form of synesthesia?

Diseases have often been personified, from the whimsical “Enza” of the Spanish Influenza Pandemic-era skipping rope rhyme: “I had a little bird. Its name was Enza. I opened the window. And in-flu-Enza.” Or the “demon” of smallpox slain by Japanese hero Tametomo. Or the spectre of Cholera in this appalling French illustration. O’Donnell was keen on “elementals” of all kinds, but a “diphtheria elemental” or the “spirit of meningitis” seems a bogeyman too far.  Yet the Greeks and Romans named the spirits they believed to cause disease. Νοσοι or Nosoi were the daimones of sickness and plague. One of the Roman spirits was called, significantly, Morbus. See this link for more details.

Perversely, diseases have also been set to music. Mrs Daffodil recently posted about a musical doctor hymning the progress of a disease in “Influenza: A Tone-Poem.”  You’ll go away coughing!

Any experiences with disease-phantoms? Don a mask before sending to Chriswoodyard8 AT gmail.com