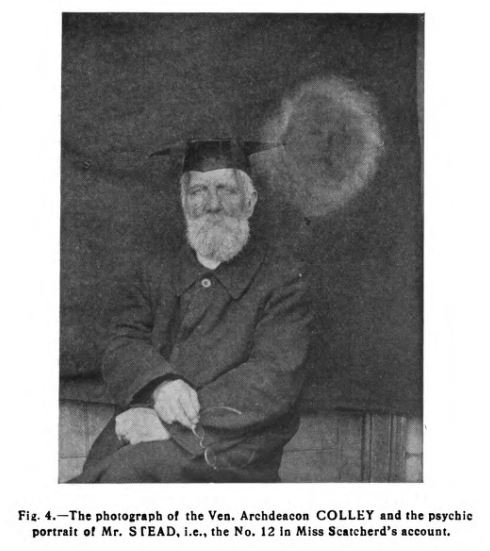 Once again I’m slipping on my prophetic mantle, this time to discuss the ominous signs surrounding the wreck of the RMS Titanic. The story of how this iconic sea disaster was predicted in an 1898 novel called Futility: Or The Wreck of the Titan, by Morgan Robertson has been done to death so I will not repeat it here. Instead, let us dip into the Spiritualist literature for some chill presentiments of death at sea.

Naturally, after the fact, many people claimed to have cancelled their tickets because of premonitions. A maiden voyage was often said to be unlucky and there were several “ill-omens” that gave rise to uneasiness: a near-collision with the steamer New York and the appearance of a sooty-faced stoker at the top of a dummy funnel, as well as several mishaps with Titanic’s sister ship, the Olympic.  A number of mediums said that they had predicted the loss of the ship. Quite a few also seemed to have gotten psychic impressions after ship’s sinking and before its fate was clearly known.  With the caveat that hindsight is 20/20 and that the anecdotes that follow this introduction were published after the sinking of the Titanic, here are some premonitions and postmonitions about the fate of that great ship.

Capt. Smith Declared to Friends He Would Sink with the Vessel

[By Cable to the Chicago Tribune.]

Newcastle, Eng., April 17. A woman living here, whose husband is an officer on the White Star liner Irishman, tells an incident about the steamship Olympic, at the time commanded by Capt. Smith, who was lost on Monday, which has an application to the disaster to the Titanic.

At a gathering of the officers of the Olympic and their wives, reference was made to the fact that the Titanic would soon take the Olympic’s laurels as the biggest vessel afloat. This recalled to some one the prophecy published in England that about this spring the largest vessel in the world would sink with heavy loss of lives.

Capt. Smith, who at the time had been notified that he was to command the Titanic, responded:

“Well, if the largest liner in the world sinks, I shall go with it.”

Afterwards the wife of one of the Titanic’s officers, who was then attached to the Olympic, told the narrator of this story about the conversation. It had upset her completely and called apprehension about her husband’s transfer to the Titanic. The husband is supposed to have been one of the officers lost in Monday’s disaster.

Journalist and psychic researcher William T. Stead was one of the more than 1,500 souls lost in the disaster. It was claimed that he predicted his own death at sea by writing a novel in which an ocean liner strikes an iceberg with fatal results. He was also supposedly warned about the ship’s fate by one Archdeacon Thomas Colley.

The Archdeacon printed a pamphlet entitled The Fore-ordained Wreck of the Titanic; the forecast of the disaster was sent to Mr. W. T. Stead and his reply was as follows: ‘Dear Sir, Thank you very much for your kind letter, which reaches me just as I am starting for America. I sincerely hope that none of the misfortunes, which you seem to think may happen, will happen; but I will keep your letter and will write to you when I come back. Yours truly, W. T. Stead.’

I’ve been unable to locate this pamphlet or find the date it was published. The passage above is a little ambiguous: the Archdeacon sent Stead a letter of warning prior to the voyage, but the pamphlet was published after the wreck.

Accustomed to being in the limelight by his muck-raking journalism, Stead was perhaps the star spirit-celebrity of the wreck, coming through the veil to deliver messages at séances only a few days after his passing, to Sophia Radford de Meissner and to medium Hester Travers Smith:

I had a striking instance of this in my own circle. One evening Miss D. and I sat at the Ouija-board, and to our surprise no results whatever came through. This was most annoying, as we generally had most interesting sittings. We had given it up in despair, and Miss D. was about to go home, when I asked her to try once more for a few minutes. We sat down and the following message was spelt out immediately and very rapidly: “Ship sinking; all hands lost. William East overboard. Women and children weeping and wailing—sorrow, sorrow, sorrow.” We had no idea what the message meant. No more came through. Just then I heard a “stoppress” being called in the street, and, wondering what could have happened, I ran down and bought a paper. The news was that the Titanic had gone down. I believe that the name “William East” was incorrect—we had no one present to follow the message, which came very rapidly and excitedly—I believe the name must have been “William Stead.” For from that day forth and for weeks after he came persistently to the Ouija-board, telling us about his death and begging to be allowed to materialize, that we might be sure it was really he. Whether telepathy would account for the first Hugh Lane communication I am not sure; I am much more inclined to believe that it was really Sir Hugh who spoke to us.

The Titanic went down April 14th. On the 17th Mme. de Meissner thought she had communications from W. T. Stead. On the morning of the 18th she thought she had communications from Major Butt. It was not till the evening of the 18th that news of the arrival of the Carpathia gave her any other assurance of their deaths that she remembered when writing. But of course during the interval, the papers were full of wireless messages that probably mentioned them. For the particulars of all this, I shall have to refer you to the book [There Are No Dead, 1912].

My husband and I were on board the Olympic, sailing to England, when the Titanic went down. At the breakfast table our steward told us that news had been received that the Titanic had struck an iceberg, but was saved with all on board. He said, however, he feared more serious news might come later. Mr. George Marcus, of the firm of Marcus & Company, of New York, was one of the Olympic passengers, and an intimate friend of my husband. Shortly after breakfast we walked on deck, and Mr. Marcus and his artist son walked with us; Mr. Marcus recounted a curious dream he had had the previous afternoon. He said, “I told my son after waking from my afternoon nap, that I had dreamed of the Titanic. I thought I saw it sailing over a smooth sea, and then suddenly run up the sheer straight side of an enormous iceberg and turn a somersault and sink into the sea.” The son said both he and his father felt the fate of the Titanic was more serious than had been reported. It was not until the afternoon that the terrible facts were received on board the Olympic. It made the remainder of our voyage very gruesome indeed, as nearly all the crew and half the passengers had friends and relatives on the Titanic. Our room-steward lost his father and two brothers. And it was during this voyage, that we, for the first time, realized fully the wonderful power of poise and self-control possessed by the Englishman. I wrote some verses, entitled “The Englishman,” as a result of this experience; and they appeared in an English paper the day we landed. Only on the arrival of the Olympic at the English port was the whole awful truth revealed to us. It was a dramatic hour never to be forgotten.

Three days before the Titanic went down to its watery grave, I had a vision of the disaster, but did not get it clear enough to distinguish a ship, nor the place of the accident. The evening of the fatal night, while sitting by myself I felt a feeling of unrest and weariness coming over me. Giving way to my feeling I prepared to retire, but before I was even comfortably settled, I saw a shadow cross my eyes. Looking up, I saw Big Chief and a Hindoo member of his band.

They talked together for a few moments, and immediately after their conversation I felt myself drawn toward them. It seemed as if we were floating above the ocean. Looking off into space, we could see what appeared to be a large floating palace. As we approached, it seemed to take on all the colors of the rainbow—a picturesque object. When we came closer to it, its appearance changed to that of a large, beautiful butterfly—a winged personification of gaiety and supremacy. It sped on and we watched. Suddenly it seemed to disappear between two walls of ice and snow—we lost it. On coming to my senses, I was wet from sweat, cold, and frozen from the effects. Several mornings following, the world received the news of the great marine disaster.

The author was the daughter of a Native American father and a French mother. She was born in Quebec with a caul over her face. Educated in a convent, she became a nun, fell in love with a priest who died, but returned to take her on out-of-body voyages. Eventually she left the convent and wrote her memoirs. She had more claim than most mediums to have Native American spirit-guides.

See this link for a story about how Captain Smith of the Titanic was seen after his supposed death on a street in Baltimore by a former shipmate.

Other Titanic premonitions published or well-attested before the ship went down? And does anyone know where I can find the text of Archdeacon Colley’s pamphlet? Chriswoodyard8 AT gmail.com