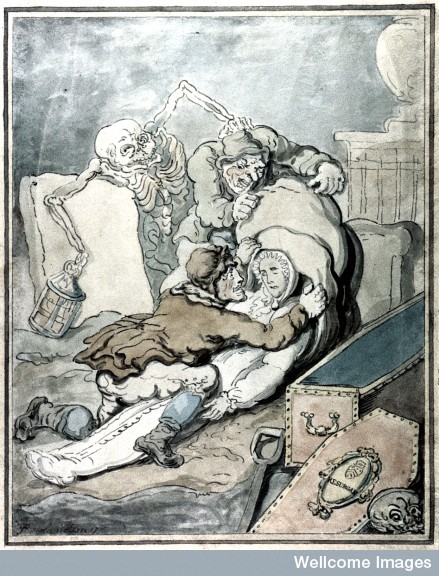 Previously I reported on the manufacture of shrouds and burial robes. Today we’ll look at some representative stories of the superstitions and ghosts associated with burial shrouds.

A good shroud was of the utmost importance for a “decent” burial. One benevolent English gentleman, seeing a young Irishwoman sewing what looked like a bridal gown, commented on the “finery.”  The young woman rather tartly set him straight: she was sewing her own shroud and whatever happened to her, at least she’d be properly dressed for burial.

Seeing the apparition of some relative or acquaintance in a shroud almost certainly meant doom for the shrouded person.

I will relate a double dream that occurred to two ladies, a mother and daughter, the latter of whom related it to me. They were sleeping in the same bed at Cheltenham, when the mother, Mrs. C , dreamt that her brother-in-law, then in Ireland, had sent for her; that she entered his room, and saw him in bed, apparently dying. He requested her to kiss him, but owing to his livid appearance, she shrank from doing so, and awoke with the horror of the scene upon her. The daughter awoke at the same moment, saying, “Oh, I have had such a frightful dream!” “Oh, so have I!” returned the mother; “I have been dreaming of my brother-in-law!” “My dream was about him, too,” replied Miss C . ” I thought I was sitting in the drawing room, and that he came in wearing a shroud, trimmed with black ribbons, and approaching me he said, ‘My dear niece, your mother has refused to kiss me, but I am sure you will not be so unkind.”‘

As these ladies were not in the habit of regular correspondence with their relative, they knew that the earliest intelligence likely to reach them, if he were actually dead, would be by means of the Irish papers; and they waited anxiously for the following Wednesday, which was the day these journals were received in Cheltenham. When that morning arrived, Miss C hastened at an early hour to the reading room, and there she learnt what the dreams had led them to expect: their friend was dead; and they afterwards ascertained that his decease had taken place on that night. They moreover observed, that neither one nor the other of them had been speaking or thinking of this gentleman for some time previously to the occurrence of the dreams; nor had they any reason whatever for uneasiness with regard to him. It is a remarkable peculiarity in this case, that the dream of the daughter appears to be a continuation of that of the mother. In the one he is seen alive, in the other the shroud and black ribbons seem to indicate that he is dead, and he complains of the refusal to give him a farewell kiss.

One is almost inevitably led here to the conclusion that the thoughts and wishes of the dying man were influencing the sleepers, or that the released spirit was hovering near them. Spirits Before Our Eyes, William Henry Harrison, 1879: p. 129

Pins and knots were forbidden on burial clothing or shrouds, according to Irish tradition. If they were inadvertently used, the ghost would come back to haunt the careless person until matters were remedied.

A Grave Exhumed in a Catholic Cemetery and the Shroud Carefully Unpinned.

Ansonia, Conn., Feb. 18. Yesterday morning four women, respectable in appearance and advanced in years, entered the side gate of the Roman Catholic cemetery, proceeded along one of the avenues and halted at a new made grave. Presently two men made their appearance and with shovels opened the grave. The women stood with bated breath, tears running down their faces. Presently the box which enclosed the casket and remains of a young girl was reached. One of the women gave a low scream. The strong arms of the men raised the box and placed it above ground. The lid was taken off the box and the casket opened. The features of a young, handsome, and beloved daughter of one of the women was exposed to view. The men looked on as if in wonder at what followed. None but the women understood it. Busy fingers went through the dead girl’s hair and shroud and all the pins that could be found were removed. The string which has placed around the feet after death was removed. A needle and thread were brought into use to supply the place of the pins in the hair and shroud. The lid was then placed on the casket and the remains lowered into the grave, which was filled once more.

This strange proceeding gave rise to many inquiries. Only a few could answer them.

It was learned that there is a strong superstition among the Irish people that if a corpse is buried tied or with pins or with even a knot at the end of a thread that sews the shroud the soul will be confined to the grave for all eternity, and that the persons guilty of the blunder will be disturbed by the restrained spirits while on earth. Thus it was, according to the testimony of the one of the women, who said she had been bothered for two nights previous by the ghost of the girl, now all were happy. This is not the first time that an incident of the kind has occurred in the same cemetery. New Haven [CT] Register 18 February 1886: p. 1

The drowned young woman in this next story returned to complain to her parents that the undertaker had buried her on the cheap, with a filthy piece of flannel instead of a proper shroud.

WHICH OCCURRED IN THE ISLE OF WIGHT.

In the month of September, last year, the body of a young woman, dressed in black silk, with a watch, a ring, and a small sum of money, was found floating near Spithead, by a lieutenant of the impress, and conveyed to Ryde in the Isle of Wight. As no person owned it, a parish officer, who was also an undertaker, took upon himself to inter it, for the property that was attached to it, which was accordingly performed.

One evening, about a fortnight after the event, a poor man and woman were seen to come into the village, and on application to the undertaker for a view of the property which belonged to the unfortunate drowned person, they declared it to have been their daughter, who was overset in a boat as she was going to Spithead to see her husband. They also wished to pay whatever expence the undertaker had been at, and to receive the trinkets, &c. which had so lately been the property of one so dear to them; but this the undertaker would by no means consent to. They repaired, therefore, to the churchyard, where the woman, having prostrated herself on the grave of the deceased, continued some time in silent meditation or prayer; then crying, Pillilew! after the manner of the Irish at funerals*, she sorrowfully departed with her husband. The curiosity of the inhabitants of Ryde, excited by the first appearance and behaviour of this couple, was changed into wonder, when returning, in less than three weeks, they accused the undertaker of having buried their daughter without a shroud! Saying she had appeared in a dream, complaining of the mercenary and sacrilegious undertaker, and lamenting the indignity, which would not let her spirit rest!

The undertaker stoutly denied the charge. But the woman having secretly purchased a shroud (trying it on herself), at Upper Ryde, was watched by the seller, and followed about twelve o’clock at night into the church-yard. After lying a short time on the grave, she began to remove the mould with her hands, and, incredible as it may seem, by two o’clock had uncovered the coffin, which with much difficulty, and the assistance of her husband, was lifted out of the grave.

On opening it, the stench was almost intolerable, and stopped the operation for some time; but, after taking a pinch of snuff) she gently, raised the head of the deceased, taking from the back of it, and the bottom of the coffin, not a shroud, but a dirty piece of flannel, with part of the hair sticking to it, and which the writer of this account saw lying on the hedge so lately as last month. Clothing the body with the shroud, every thing was carefully replaced; and, on a second application, the undertaker, overwhelmed with shame, restored the property. The woman (whose fingers were actually worn to the bone with the operation) retired with her husband, and has never been heard of since.  T.P. London Free Mason Magazine 1 June 1796: p. 406

*Keening was a well-known feature of Irish mourning—but can anyone tell me what “Pillilew!” means? The only meanings I can find are “quarrel” or “bother!”

Too much ostentation was as bad as too little for the Baltimore “old maid,” who haunted her old boarding house when she was not buried in the shroud she had wanted.

An Old Maid’s Ghost has been sitting on a bridal bed in West Baltimore, and worrying all the lodgers in a boarding house. The old lady’s spirit was exercised over the grave-clothes. A short time before her death, she asked the lady with whom she was boarding not to bury her in any costly dress, but in a plain shroud, and threatened to haunt the house if her direction as not heeded. Her friends thought that it was only an old maid’s notion, and when she died buried her in an elegant silk and adorned the casket with beautiful flowers. About two weeks ago, a bridal couple engaged board at the house. Enter the ghost. The young wife awakened her husband, one night, with a startled exclamation. There was somebody in the room, she said; somebody was sitting on the bed. He heard a noise. Somebody was moving softly across the room, he said; somebody had been sitting on the bed. Whereupon he struck a light; the shade was not in sight. The next night a  gentleman in the next room was visited by the ghost, during the next fortnight, she paid visits to every sleeping-room in the house. All the boarders have left the house, and the landlady is talking of having the body exhumed, the silk dress taken off, and the plain shroud put on. It is just as well to let an old maid have her own way in matters of dress. St Alban’s [VT] Daily Messenger 12 October 1876: p. 2

More stories of shrouds and spirits The Victorian Book of the Dead, which can be purchased at Amazon and other online retailers. (Or ask your local bookstore or library to order it.) It is also available in a Kindle edition.

See this link for an introduction to this collection about the popular culture of Victorian mourning, featuring primary-source materials about corpses, crypts, crape, and much more.