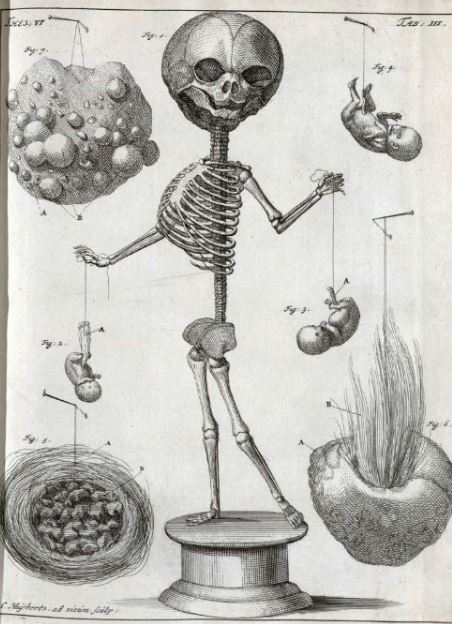 A busy day, so I offer a creepy tale of a ghostly woman, a phantom fire, and a little skeleton.

I announce myself to the reader as the man who believes in Ghosts—perhaps. At any rate, I believe in my father, and he believed the story I am about to relate. My father resided at Ipswich, and once had occasion to go to London on business. It was during a period of great popular commotion, and, the city being very full, he had some trouble in finding a lodging. The master of the house observed that it was a good, large room—for he could get but one—and very comfortable, if he did not mind—but there he stopped, for his wife gave him a nudge. That made my father suspect something was not right.

“It isn’t over a slaughter-house, or a burial-ground, or a dissecting-room, is it?” says my father.

“Oh, dear, no!” says the landlord; “but some people say the next house is haunted; and that anybody who sleeps in this room can see a lady in white, crying, at that window that you can see there.” “Oh, is that all?” says my father; “perhaps there’s some poor maniac confined there. Whether or no, however, that’s no objection, for I don’t care a rush for all the ghost that were ever invented.”

Well, he took possession of the room; and before night closed in he had an opportunity of taking an accurate survey of the neighboring premises. A lead roof, apparently over a workshop, lay between his window and that one where the ghost was said to appear, only there was this difference, that he could easily step out of his upon the leads, whereas the neighbor’s was about nine or ten feet higher. My father always vowed that he was perfectly sober when he went to bed. He couldn’t tell how long he had been asleep, when he was suddenly awakened by loud screams; and when he opened his eyes, he saw that the opposite house was on fire. He was out on the leads in a moment. The haunted room was filled with bright flames, and at the window stood a lovely young woman, clasping a baby in her arms, and screaming for help.

“Oh, save my child—save my child!” she kept on crying, in tones of such anguish that they went to my father’s very heart.

“Give it to me,” he said, “and then jump out into my arms. The distance is nothing; you can not be hurt. Take courage! Now, give me the baby!”

She leaned forward and dropped the baby, wrapped in a shawl, into my father’s arms. Just as he got it safe, it seemed to him that the roof fell in. There was a crashing noise, but not very loud; the flames disappeared, and so did the young lady. In at his window he rushed again, and through the house, shouting, “Fire! Fire!” with all his might, and with the baby still in his arms. Out rushed the landlord as pale as a ghost, and his wife after him, in such a monument of a night-cap, that it quite overawed my father, even in the midst of his agitation. The maid was shrieking “Murder!” down in the kitchen, and the apprentices had tumbled out from under the counter in the shop and were poking their noses cautiously out, and kindly inquiring who was killing her; and on every landing up the stairs the lodgers were calling out to know what was the matter. There was altogether a terrible row in the place.

“The next house is on fire!” said my father.

“It’s only the old story,” said the landlord. “Run upstairs, my dear, and tell them it’s a false alarm.”

“But it is not a false alarm,” says my father, “for I saw the flames and I saw the roof fall in, and I fear the lady is buried under the ruins. Why don’t you come and help her? She had just dropped her child into my arms when the roof fell.” The landlady then first set eyes on the bundle, for her husband at that moment lighted a candle from the rushlight, which had very imperfectly illuminated the scene before.

“Yes,” says my father, “and I think I’d better leave it with you, Ma’am, while I go and endeavor to rescue the mother.”

The woman did not speak nor utter a sound, but she just lifted up the shawl from the child’s face, and dropped down like a lump of lead upon the floor. Instead of attending to her, but my father and the landlord looked into the shawl. It contained the skeleton of an infant, wrapped up in the rags of what had once been very costly garments. My father felt very sick, and the landlord staggered back against the wall and dropped the candle-stick out of his hand.

When the landlady fell (she was a tall, heavy woman, and gave the house a good shake) the maid screamed “Murder!” louder than ever, and the lodgers called out more energetically to know what was the matter. That frightened the landlord back to his senses; for he thought if they came down and saw what my father had got, it would frighten them all out of the house. So he caught up the candle, which, luckily, was not extinguished by the fall, and pushed my father, with his bundle, into the bed-room. Then he called out that it was only the strange gentleman had had the nightmare, and his wife had been frightened into a fainting fit. So they all went, rumbling back to bed; and the man helped his wife into her room, where my father stood trembling and shaking, not having presence of mind enough to put down the bundle and not even daring to look into it again.

The little skeleton was quietly buried the next day by an old sexton, who asked no questions, as he knew the landlord was a respectable householder; and so they all concluded that the ghost was satisfied, and that that was the reason why she never appeared again.

When my father examined the place closely by daylight, he saw evident marks of fire about the windows; but he was assured that these were the remains of a fire that happened there a great many years before. In short, the whole affair of the apparition seemed to shroud some fearful mystery, which was perfectly inexplicable. Some years after, when he was in London again, my father endeavored to find out the house, in the hope of obtaining a clue to the mystery; but he could discover nothing but a mass of ruin. That street and some others were just demolished to make way for that which is now Regent Street.

This is an abbreviated, unaccredited version of “The Little Skeleton” from Spell-Bound, or Tales of the supernatural, by Mrs. M.A. Bird, 1865, author of The Fate of Thorsghyll [in three volumes], Cozynook, and The Hawkshawes [short-changing the reader with just two volumes]. Beyond that I have no information on the author, who framed most of Spell-Bound as tales told by a group of medical students.