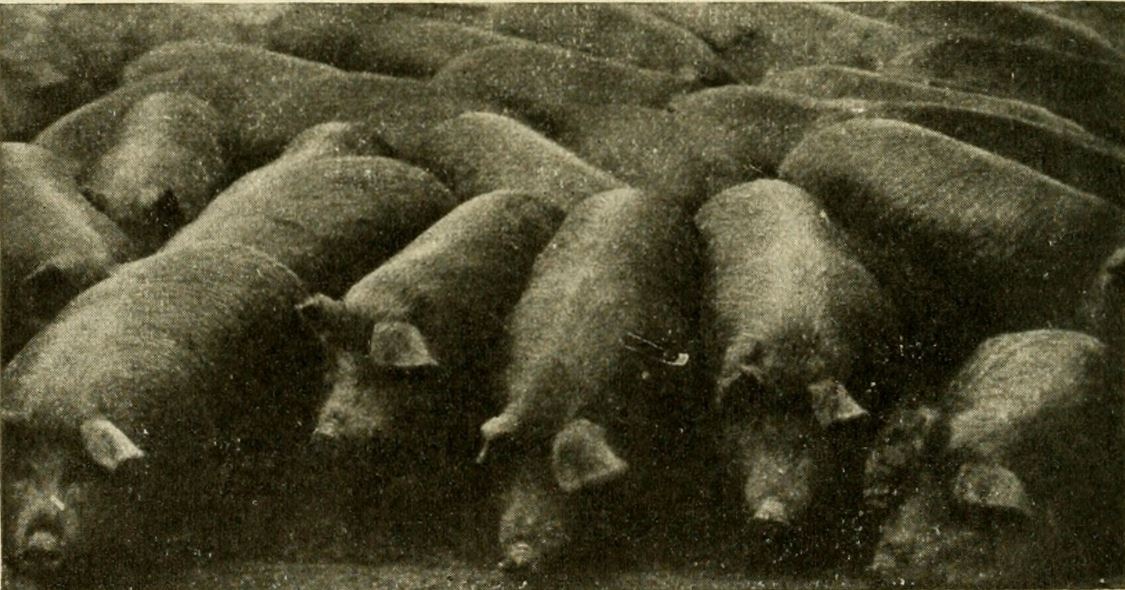 A busy day today—these presents aren’t going to wrap themselves—so a heart-warming Christmas yarn about a phantom train and its shrieking cargo.

Loaded With Mysterious Hogs, It Was, and All of “em Squealed.

“Well, it’s getting almost time when we used to see it,” ruminated Conductor Peter Carson, presiding member last night when the stove committee convened in the Linndale shops of the Big Four. “It’s almost Christmas time. It was always on Christmas eve that we used to see It.”

The stove committee, at least this particular branch of it, was in a reminiscent mood last night. By common consent discussion of questions now facing the railroads was tabooed. Even such a ruling topic as the eastern lines’ freight increase, which looks to many people as if it meant prosperity with a big “P,” was neglected, for the stove committee was harking back to old times.

“It was a night something like this one—cold and blowy, with snow threatening—Christmas eve a good many years ago, when I saw It,” continued Conductor Carson, as he sent a several centimeter shell into the sawdust box, dimly outlined by the lantern of Mulvaney, the switchman.

“What was It?” queried young Jackson, the brakeman, who is yet in his early twenties and isn’t supposed to know very much about railroad history.

“I was just going to tell,” returned Carson, and then he was silent long enough to impress the lesson of being-seen-and-not-heard. It was only by the sufferance of his elders, anyway, that young Jackson had been given a seat in the committee.

“It was the Phantom Hog train,” resumed the conductor, noting the effect of his tobacco chewing marksmanship. “It was sure the sensation in those days, when I was flagging on a slow freight.”

Not until the conductor had bitten off another mouthful of his choice tobacco did he launch boldly into his tale, which the stove committee voted was good enough to place in the records so that it will not be lost to posterity.

“The first time I saw the Phantom Hog train,” said Carson, “was when most of you fellows had on pinafores. But I remember it as well as if it happened yesterday. Some things in this world you can’t forget.

“We were coming along, three hours late, just this side of Galion, when two or three valves on the teapot that was drawing us blew out, and we had to stop until the engineer—old Bill Sanders, he was, dead these many years—could diagnose her. I was the junior member of the braking department on that trip, and the con[ductor] sent me back with a red glim [lantern] to flag anything that might be so inconsiderate as to try to smash our caravan into toothpicks. The weather had put schedules all wrong and we didn’t know just exactly what was behind us, nor where it was.

“So I journeyed to the rear about half a mile, around that long bend that used to mark the place for slowing down for Galion, and then I sat down by the track, waiting for something to happen or for old Bill to blow his whistle, telling me to hotfoot back. Well, something happened pretty rapid.

“I was sitting there, wiping the wet snow off my neck, and thinking how warm and comfortable it would be at home, when suddenly I heard right near me enough noise for six fast freights. I jumped up and looked west, and there It was, coming faster than I ever saw any freight travel, less than a quarter of a mile away.

“I hadn’t been dozing. I know that, but I couldn’t figure out how It had got up so close without me hearing anything. Anyway I jumped out in the track, waved my lantern like a fellow exercising with dumbbells in the Collinwood Y.M.C.A., and I thought I had her.

“But there wasn’t any more let-up in Its speed than if I had been a signpost waving fare-thee-well. I jumped off the track just in time to let It go by, and I felt Its wind. Well, It went past like lubricated lightning—forty cars. I counted ‘em, every one loaded to the guards with big fat hogs. Every one of ‘em was squealing. I got one glance at the engineer as he went by. He was looking straight ahead, and his was the devilishest face I ever want to see.

“No use trying to imagine how I felt. I watched It disappear around the bend and then I started to travel back, knowing I’d get there in time to see the remains of a real wreck. While I wondered whether they’d just fire me or whether I’d be tried for criminal neglect—of course they’d say I was sleeping and didn’t flag It—I listened for the crash.

“I traveled pretty fast, and it wasn’t more than two minutes till I rounded the bend. I looked, and what do you suppose I saw? Nothing but red and green lights way down the track, and I knew from the way they hung that they were on the rear of our dinkey. I kept on running, without trying to think what it meant, and when I got to the caboose I pretty near fell flat. Sam Andrews—he was conductor the—now he’s in the operating department—asked me why I hadn’t waited till they blowed for me, and said to jump on, as they were ready to pull out.

“I was young and timid then, and I didn’t say a word about what I saw until a week later, when I told some of the boys in the Linndale roundhouse about it. At first they gave me the laugh. But after awhile they came to believe in it.

“Well, the next year, the same thing happened again, but not to me. And for five or six years on Christmas eve somebody brought in a report of the Phantom Hog train. And I know it was all true. It finally got so that the dispatchers would mention it in their orders every Christmas eve. They didn’t give it any berth, but just told everybody to watch out for it.

“That’s the story of the Phantom Hog train. Nobody ever explained it but there was a report that a hog train had been wrecked on this division when the line was first built—the wreck was on Christmas eve—and I believe it was the ghost of that train that I saw.”

“When did you say was the last time?” asked young Jackson, who had been thinking he was due to go out before midnight in the direction of the scene of Carson’s experience.

“So long ago that the ghost train is in the scrap heap now,” answered Mulvaney, the switchman. “and anyway it hasn’t been seen once since the road went prohibition.”

Ba-dum-bump…cue the obligatory joke about ghosts and “spirits.”

While the ghost “yarn” is told in a real place: the Linndale Roundhouse, West Park, near Cleveland, I’ve not had time to run down any of the characters, although there is a Peter A. Carson who died in 1927, buried in Cleveland’s Calvary Cemetery. And possibly this is the accident that inspired the story, if not forty cars crammed with actual shrieking swine spirits.

Our friend B Waddel, Esq., shipped a lot of hogs last week, and Thursday night a part of the train containing his hogs was thrown from the track of the A.& G. W.R.R., a short distance beyond Mansfield and forty-seven of Mr. Waddel’s hogs were killed. Of course the company will have to pay the bill. Marion Independent.

The yarn suggested this story of equally noisy shrieking spectral swine—without the train, of course. And the “devilishest” engineer hints that these are satanic swine on a hell-bound train. If Conductor Carson was trying to draw a Gadarene parallel, he should have had the phantom hog train plunge off a bridge.

While I’ve heard of phantom trains with phantom passengers, this is the first time I’ve heard of ghostly animal freight. Other examples? Run them down the track to chriswoodyard8 AT gmail.com