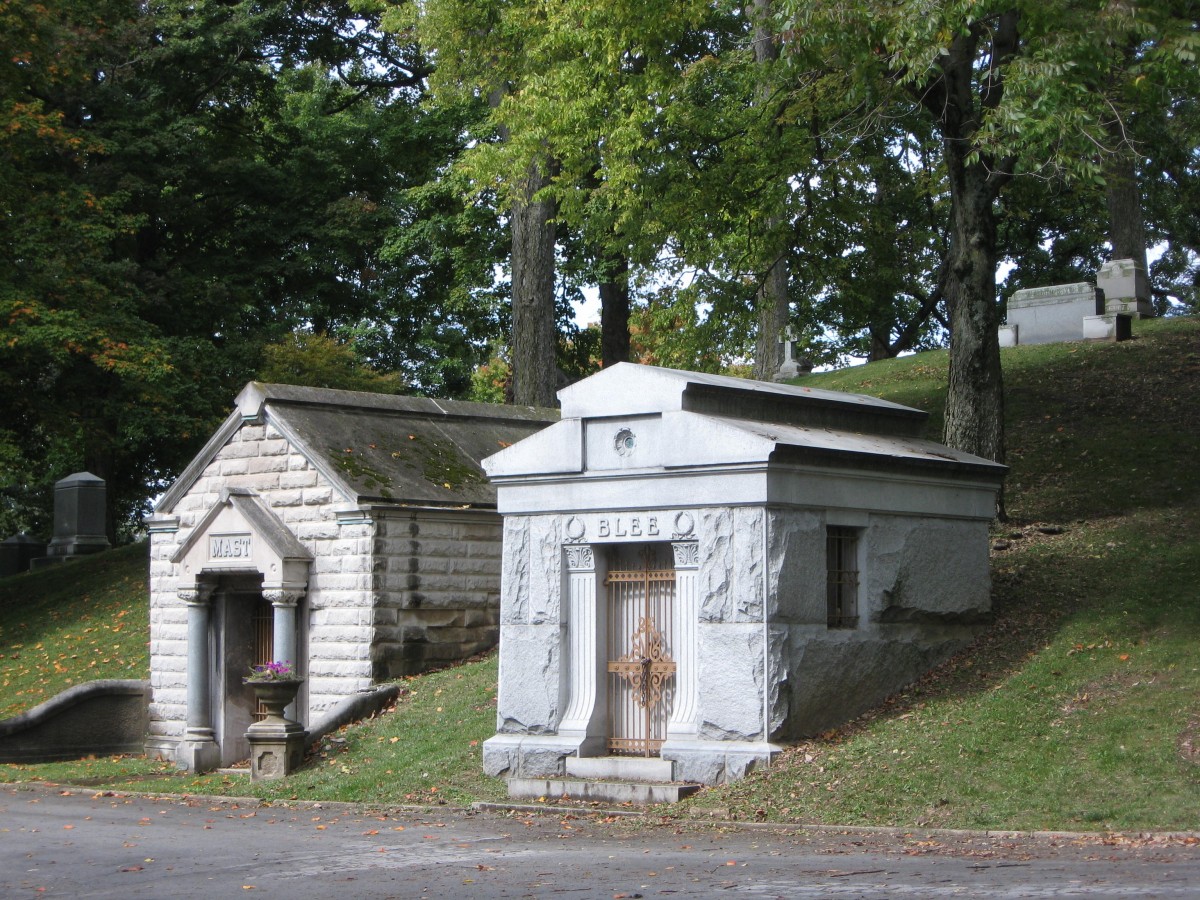 Ghouls prowled the cemeteries of the 19th century, seeking corpses to unearth, sack, and sell to the anatomist. While our Victorian ancestors were terrified that they might be buried alive, they had an equally deep fear that their dead bodies would be resurrected, not on the Day of Judgment, but in the dead of night by the body snatchers.

To prevent this, graves were salted with explosives like the “coffin torpedo,” or bodies were held in vaults until they were too decayed for dissection. Sometimes heavy weights or cages (mortsafes) were placed over graves to discourage diggers. Family members took turns standing vigil over graves and many cemeteries had watchmen.

It was a thankless job. The ghouls at the head of their profession could open a grave, extract the corpse, and refill the soil in under an hour. A watchman had to be vigilant, walking the grounds of a cemetery in the dark, and in all weathers, for rain softened the ground and allowed for a quicker opening of a grave. Body snatchers might be armed and more than one watchman was murdered or exchanged gunfire among the tombstones. It was no wonder that, in the 1880s, a new occupational disease emerged.

A New Form of Mania that Affects People Who Guard Cemeteries.

The men who patrol the cemeteries after the sun has gone down are armed with pistols and clubs, and are generally accompanied by trained and savage bloodhounds. In addition to these external and tangible means of defense they must be gifted with rare and peculiar mental organization. So many men have lost their reason through watching graves at night that person in that position have come to believe that they risk lapsing into a state of melancholia perfectly distinct form any other form of insanity. Sextons and grave-diggers call this affliction “tombstone madness.”

A startling realization of this fact was telegraphed throughout the country yesterday. It was announced that several of the soldiers who do sentry duty day and night at the tomb of Garfield, amid the dreary solitude of Lakeview Cemetery, near Cleveland, have become insane. Anything or any device is used by the men to get away from the ghostly muster of tombstones or the dark array of mounds.

An old watchman at Glenwood Cemetery explained this to a Times reporter yesterday by saying that in all probability the soldiers detailed at the grave were not picked.

Take half a dozen men from any walk of life,” he continued, “and place them at night to watch graveyards, and the chances are that in a short time five of the six will feel like retiring permanently to a lunatic asylum.

“If a man wants to enter this profession and be a success at it, he must be about as impressible as brick and mortar. If he has the least bit of imagination he had better abandon the business, for when the moon is obscured by clouds and he is walking about a cemetery, shivering from his heels upward, he will mistake tombstones for ghosts. He will think that the owls, as they whiz past his ears with their mournful hoots, are unquiet spirits come to haunt the receptacles of the bodies which they once permeated. When the noise of his footsteps makes the rats disappear with rustling sound into little thickets of evergreens he will start and grasp his weapon. The very whine of his dog will make him feel nervous, and bit by bit his reason would become impaired.”

“I could give you some sad reminiscences of people who watch graveyards,” said one of the oldest watchmen at Laurel Hill cemetery, in a strange, solemn tone. Then, half jestingly, he added: “But they’re buried in the past, and it’s my business to let what’s buried remain so.” He did not mind telling one story, however.

“I used to work in a Brooklyn cemetery before I came to this city,” he began. “It was then that the terrible scene I shall speak of occurred. We wanted an assistant night watchman very badly, but none of the persons who presented themselves could endure staying up with the graves for more than two or three nights each. At least there came an unfortunate man whose health seemed shattered by overwork and privation. It was his last venture. He had tried to get employment everywhere without result, and his wife and children were suffering. We took him on. I don’t think I shall ever forget his face the morning after his first night in the graveyard. He said he had endured unheard of agony, but was hopeful of getting over it in time. The following night was dark and windy. Rain came down in torrents, and there were flashes of lightning every few minutes. At about one o’clock the head watchman heard a loud cry; there was a sound of running feet, followed by the report of a pistol. A search was made, and the unfortunate man found lying on his back across a grave, dead. There was a small hole in his temple, and his own revolver, one barrel of which was empty, lay three feet away where he had flung it, imbedded in the ground. It was certain that some fearful creation of the imagination had so terrified him that he took his life to escape from it.”

When the old man had finished this narrative he was silent, with a vacant look, and allowed bright tears to chase each other down his cheek. Suddenly he made a brisk motion and forcibly forgot the subject of his narrative. “There are amusing things sometimes,” he said, speaking at first with an effort. “A short time ago a man was put to work at night in a cemetery not far from here. He strolled around in an affected, indifferent way, whistling tunes dear to his countrymen. In the course of his rambling he tumbled bodily into a newly-made grave and a lot of loose earth fell on him when he reached the bottom. He struggled wildly, and in about an hour and three-quarters managed to get out, screaming lustily that the devil had dug a grave and tried to bury him in it. With a single bound he cleared a four-foot fence, rolled down a forty-foot hill, and that’s the last of him, for no one about here ever set eyes on him again, dead or alive. He must have gone back to Ireland, for he wasn’t hurt at all. Some practical jokers once tried to scare a watchman, a friend of mine. It was immense fun—for the watchman. They got into the cemetery disguised as body-snatchers, and pretended to be opening graves. There were three individuals. One got seven buckshot in him, the second received five in his leg, and I forget what happened to the third. The only thing that is more dangerous than watching graves is robbing them.”

“What is it produces the dreadful melancholia?” asked the reporter.

The old man looked around him mysteriously and added, as he moved away: “I’m not a doctor nor a scholar, but I have my belief that it’s the miasma from the graves that poisons the blood and warps the brain. Just see, cool as it is this evening, the vapour is rising—rising.” And the old watchman pointed toward the setting sun, against which blazing background a filmy mist could be seen ascending from the ground like the genie from the fisherman’s box in the Arabian tale.  Texas Siftings [Austin, TX] 28 April 1883: p. 3

One could also perhaps point to exposure to the heavy metals used in embalming and coffins, insect-borne disease from that miasma, or to overindulgence in the warming flask sometimes employed to ward off the cold. The post of watchman may also have been a profession of last resort for those with few prospects.

Here is the story of a soldier who apparently had a breakdown while guarding the Cleveland grave of President Garfield. This was before the immense tomb we see today was finished. I have not found any others, although there were some strange incidents at the cemetery [another post, another day]. The journalist may have exaggerated the insanity toll.

Joseph Kashinsky, a private in Company H, Tenth U.S. Infantry, on duty at Garfield’s grave, in Lake View Cemetery, has become insane, and has been taken to Detroit for cure. The peculiar form of insanity is melancholia, and a peculiar state of affairs came to light when the case was looked up. The men on the guard dread their duty, and several cases are reported of men committing offenses for the purpose of getting punished.

Anything or any device is used to get away from the ghostly array of mounds and tombs. This is said to have driven Kashinsky insane, and his incoherent language and actions carry out the impression. One man, a veteran, said: “I dread the duty, although I am not afraid of it and do not complain, but on the younger the strain is intense. Many tricks are resorted to to escape the night watches.” Kashinsky is a young Pole, but ten months a soldier, twenty-one years of age, and, until this trouble came, a light-hearted, healthy young man. Cincinnati [OH] Commercial Tribune, 2 April 1883: p. 2

The font is badly blurred, but I believe the name is correct, although I have not found Private Kashinsky in the regimental roster. The papers had a difficult time with Eastern European names.  Any other insane guards?  Chriswoodyard8 AT gmail.com