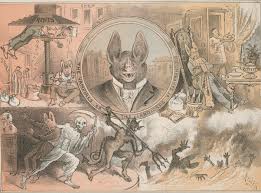 What is it with vampires? They used to be a truly terrifying supernatural creature who would crawl up the side of your house to drain your blood. Yet ever since that damned Cruise/Pitt movie they’ve been misunderstood, romantic figures in puffy shirts and Fabio hair. (Let me correct myself, they were romantic, if predatory, figures even before that—as in Bela Lugosi and Christopher Lee–or Carmilla.) Modern-day persons who claim vampire status, like some other fetishists, have achieved a sort of fan-con respectability: the big O-positive.

But they used to be figures of fear. They were pale, undead and surrounded by the vile miasmas of the grave. They crept around the village, preying on livestock or on human victims who gradually withered into death. And when one family member was drained and buried, the vampire moved on to the next, and the next, no matter how many corpses were exhumed and hearts burnt to ashes…. Let us return to the golden days of yore when blood-drinking was the stuff of nightmares in this ripping yarn from 1870.

The New York Star has found a human vampire at the boarding-house of a Mrs. Hunter, on East Fourteenth Street. From a three-column account is taken this short extract:

This Long was a singular looking creature. Of moderate height, he was thin and angular everywhere save in his abdomen. This protruded like a round, bloated bag, in a dropsical manner. His hands were long and ivory white. The nails were bitten, and a ragged growth of reddish hair, something like rusty moss, grew on his fingers. His face was perpetually livid, his eyes were dull and corpse-like. His hair was a dingy brick-red, his eyebrows almost colorless, and his eyelashes totally absent. He stooped, and never looked boldly into anyone’s face. His lips, of a dull purple tint and ragged-edged, protruded considerably. His voice was hoarse and husky. He seldom spoke. He never sat out of his room except at meal times. He never smoked. He never took part in the amusements, such as they were, of the parlor. He kept coldly to himself, and his appearance was so repulsive that no one ever attempted to establish an intimacy with him. He was almost singular enough in his behavior to be deemed mad. He was full of strange tricks. One day Mrs. Hunter, in carving, accidentally cut her finger. At once he sprang from his seat, savagely seized the bleeding member and thrust it into his mouth, slobbering his face over with blood. Then suddenly leaping to the door, he made his escape. Mrs. Hunter took it as a tribute of affection, and smiled afterward as she told the story. He loved raw meat. He would stop in front of butchers’ shops, and watch, with watering mouth, the dismemberment of cattle and sheep, buying now and then a bleeding handful of fibre which he used to chew with avidity. He was always cutting his fingers, and it was noticed that whenever he did so he would lap up the blood that flowed from his wound with ravenous delight. These and a dozen other instances of depravity made those who knew him cordially loathe and detest him. The young doctor, full of hygienic theories, tried hard, but tried vainly, to connect the sickness to prevalent in the house with imperfect drainage or some other raison d’etre of half the maladies in the world. All attempt of this kind failed. He could not reconcile the symptoms with miasmitic influences, and he gave up in despair the solution of the problem with any theory of this sort for a primary assumption. But he was destined to penetrate the mystery. One fine evening there had been an interesting autopsy on a case of complicated disease. The doctor had been present, and had taken an active share in the post-mortem researches incidental to such an event. A young surgeon from Blackwell’s Island had also “assisted” at the dissection. The hour at which the medical conclave adjourned was so late that the Blackwell’s Island doctor was compelled to accept an offer on the part of our friend of Twenty-fourth Street to share his room for the rest of the night. The visitor gladly complied with his friend’s invitation, and at about midnight the two physicians retired, carefully bolting their door. Exhausted by their scientific labors, they soon fell asleep. The young police doctor woke at about 2 o’clock in the morning, and feeling the heat very keenly, opened his door and went in search of some ice water. He fancied he heard footsteps noiselessly straying about the house, but doubting the possibility of any felonious intrusion on the premises, he resolutely determined that the sound was purely imaginary. He was gone some time. When he re-entered his apartment he confronted

A SPECTACLE OF GHASTLY HORROR.

His friend was lying fast asleep, with the moonlight steeping his pale face in its silver flood of radiance. The slumberer’s eyes were closed. His chest heaved with the flow of life. His lips were parted with an unconscious smile, and the lines of care and work were smothered, as if by magic, out of his wan young face. Crouched on the man’s body, his eyes bright with an unnatural brilliancy, was the live corpse, Long. His white hands were buried up to their wrists in pillows. He had nothing but his shirt to cover his nakedness, and his long attenuated legs made him fearfully like a white spider. His throat swelled and collapsed, as he steadily sucked at a spot under the sleeper’s ear. A low purring sound mingled with the lapping of his victim’s blood. His fiendish eyes glared into the other’s white face. His baggy stomach wagged from side to side in great ecstasy. His slick white back and breast shone in the moonlight, and his red hair bristled up with angry erectness. As he sucked, the other grew whiter and weaker. Lovely visions seemed to take the place of his life’s blood. As the monster drank in the precious fluid, the smile that hovered about his lips grew softer and sweeter. It was just the opposite with the murderer. The draught of blood seemed to intoxicate him. He swelled with it. It flashed red and fiery out of his eyes. It crimsoned his ghastly face. It thickened his thin fingers and made his arm round and easy. The monster grew less hideous and more devilish with every drop. Our friend could stand the awful scene no longer. With a yell of rage, and with a conviction that the evil genius of the house stood at last revealed, he sprang upon the vampire. The demon, yelling like a hyena, and mad with the frenzy of blood, seized him with his teeth. The fight was desperate. The vampire tore his adversary’s arm and growled like a savage beast, as he drank from fresh veins. The surgeon felt in his coat pocket for some instrument. He found a small lancet, and with it stabbed the monster in the shoulder. The blood spurted out and splashed over the third participant in the awful tragedy, who still slept the sleep of exhaustion. With a ghoulish yell, the vampire tried to  fasten his hot pouting lips on the wound from which his own life blood was flowing. The combat was desperately brief. One last hopeless effort of the doctor drove the vampire’s head against the door post, and he fell, stunned. Sinking on the bed, the doctor called for aid. Two gentlemen, slinking home from a night’s dissipation, heard the cry, and came to his assistance. A terribly

Greeted their eyes. The young surgeon from Blackwell’s Island was lying white and corpse-like on the bed. Huge gouts and blotches of blood fouled the linen and discolored his bleached face. The police doctor, in a dead faint, lay half off and half on the bed, with abundant hemorrhage from his wounds. On the floor, breathing stentoriously and quite insensible, was the vampire Long. The vampire was immediately secured, and the two doctors were attended by members of their own profession. They soon recovered. The incident of this night proved, conclusively enough, the connection between the mysterious ailment of Mrs. Hunter’s boarders, and the hideous creature Long. This fearful being was removed to the City Lunatic Asylum, but killed himself soon after this reception by rolling his tongue backward down his throat, thus excluding air from the larynx. This he did on being refused a diet of blood.

I have previously posted on blood drinking for medicinal purposes here and here.  Mrs Daffodil also recently told of a Hungarian vampire (a Count, but not the one you might think.) here.