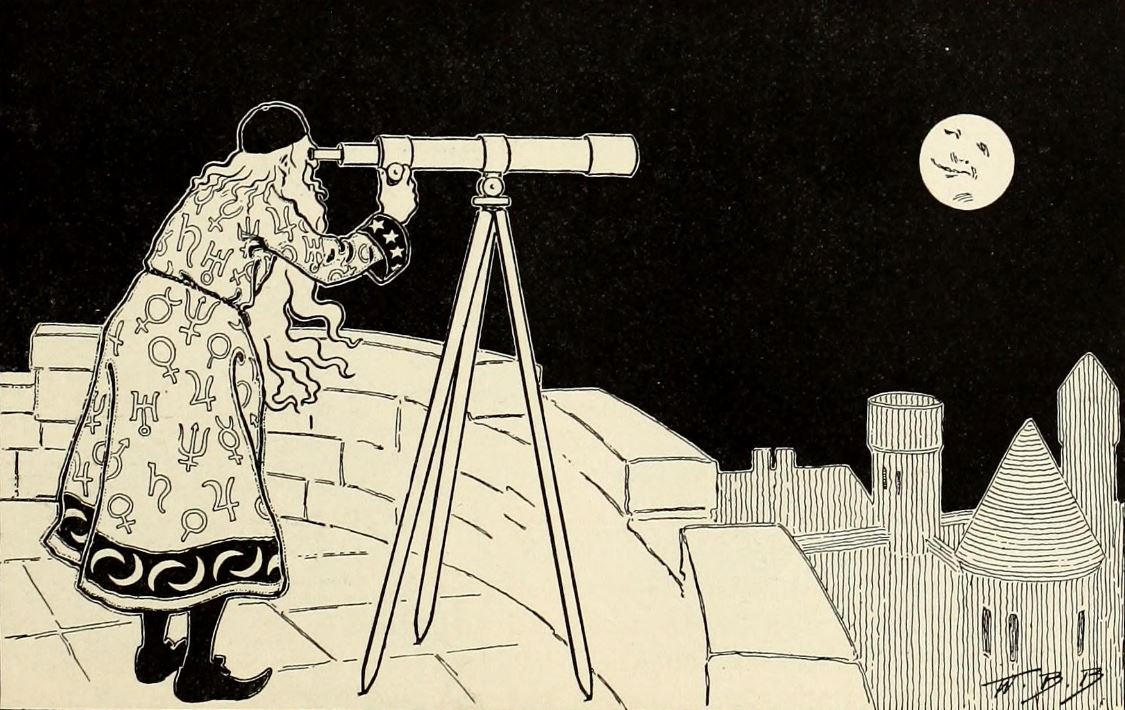 A Vision of Seven Moons in a Single Night.

An Optical Illusion or the Mind’s Delusion.

The New Moon Apparently Has the Most Productions.

How the Moons Appeared Night After Night to the Honest Observer.

Somebody said, a long time ago, that there was “nothing new under the sun,” a declaration I shall not question, since what I have to say pertains to the moon, and of what is neither new nor old, neither true nor false, and never had existence before, and that most of your readers will be ready to think, if not to wear, is but another “moon story” now. That objects appears in duplicate sometimes to people whose focal sight had been suddenly deranged is very well known, and the cause understood, and many horrid forms, unseen by friends, appear very realistic to the man tanked up with whisky; but the appearance of seven moons for more than eighteen consecutive months is not explainable from such causes.

It was at the Abita Springs, of St. Tammany parish, in September, 1892, that I first observed the phenomena. A chance look at the moon—then in its first quarter—arrested attention and caused some comments on its appearance, but as none of the friends near me at the time could perceive anything unusual about that luminary, I suppose my visual obliquities were responsible for the seven moons, clearly defined, and of equal brightness, facing us westwardly. All other objects being unchanged, I could not cease to think of what seemed such a remarkable delusion. Continuing my observations I became more and more interested, though little was said about it for three or four months, expecting all the time that some astronomer or other explorer of the heavens would mention such an unusual presentation. Each new moon, as it appeared, had the same accompaniment, following through all its phases for the month-there were seven all the time. As first seen they were piled up as shown in figure No. 1. 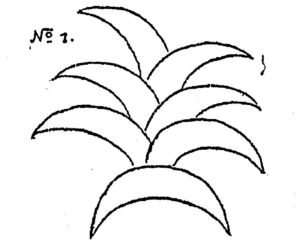 The true moon assumed to be the lower one, and though not brighter than the others, was seen in all its parts, the two horns pointing downwards to the horizon, the others seeming to be beyond, the overlapping horns not visible.

The half moon appeared as in No. 2: 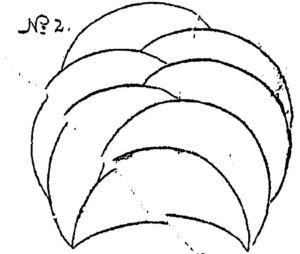 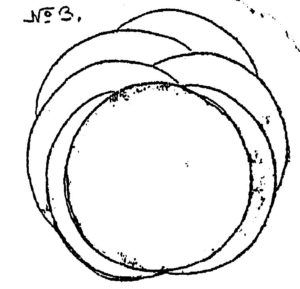 And in its last quarter, when looking eastwardly, appeared as in No. 4: 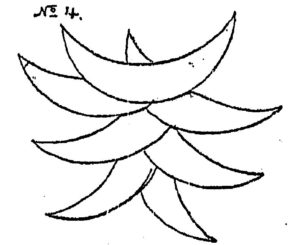 Once only, since the first observation, was there any great change relatively; it then (in its first quarter) appeared as in No. 5: 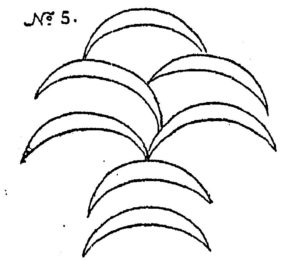 Concluding after a while that a looking glass might prove whether my eyes deceived me, one was tried, and the seven moons were all seen in it. But here again was another curious thing. Some persons could see only one moon in the glass, others see two, three, four, five, six, and some of them see seven, and having seen them in the glass declared the same number could be seen in the firmament.

I am sure, however, that a glass of perfectly true surface and even thickness would show alike to all the seven moons. To myself they are most satisfactorily seen in the heavens during the first stage of the new moon. Later on, and when at the full, the reflected moons serve to enlarge the true moon, and then its electric brilliancy is painful to the eye. Gradually these reflected images have closed down and lost somewhat of their uniform appearance and arrangement, as shown in No. 6: 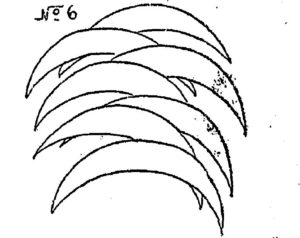 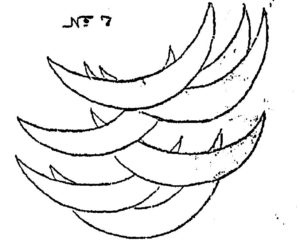 The belief that the phenomena will cease to appear after a time has prompted me to say so much, with the hope that somebody possessing instruments of sufficient power will photograph them and so get a more perfect representation. I was anxious to have it done in New Orleans, so as to present the recorded picture, but was told it could not be done there, no artist having the proper facilities.

Withholding all speculation as to the conditions precedent for such moonly exploitations, I leave the reader to judge of what I have seen and described.

What in the world was he seeing–moon dogs? Could he have had a sudden onset of cataracts? Eighteen consecutive months is a long time for hallucinations or optical derangement. The report is a little ambiguous about whether others could see the phenomenon, except after his prompting—perhaps the equivalent of a visionary putting a foot or hand on a non-seer to share the revelations.

We could get all mystical about the woman clothed with the sun and the moon under her feet and the seven stars of Revelations, but that doesn’t seem to be Mr. Sandidge’s bent. I was waiting for him to say in tones of horror, “Those are no moons…”

There was a US Congressman and Louisiana legislator named John Milton Sandidge, but he died in 1890 in Bastrop, Morehouse Parish, Louisiana. Another John Sandidge was recorded by the census of 1900 as living in that very place. His middle name might begin with an “M”—it has been partially scratched out. Representative Sandidge was born in Georgia; the 1900 census says that the other John Sandidge’s father was born in Alabama. Mistake? Or no relation to the legislator? I haven’t done a detailed search, but I can’t see that the congressman had a son that survived to adulthood.

Abita Springs, by the way, was a medicinal spa/resort. Perhaps Mr. Sandidge was ill or taking the waters—the 19th-century version of “detox”—when he first saw the seven moons. Any learned moon-watchers in the audience? I really have no clue.

Perhaps a looking glass will help. chriswoodyard8 AT gmail.com

I was delighted to hear some plausible solutions from Martin Shough and Chris Aubeck, authors of Return to Magonia,

My colleague Chris Aubeck just alerted me to your blog re the 7 moons, which we find very interesting because a couple of years back we began to collect sightings or visions of circles of ‘stars’, often 7. W

e thought about gross eye pathology like glaucoma, and migraine aura, but didn’t like either very much.
But following up your story led me to find info on the condition called polyopia. I don’t know how we missed this :
https://en.wikipedia.org/wiki/Cerebral_polyopia
Neurological causes, including migraine aura, and ocular ones like keratoconus:

https://en.wikipedia.org/wiki/Keratoconus
Polyopia usually happens when fixating the eye on a stationary object. I imagine the moon isolated on a dark sky might be an ideal target.
BUT:  The orientation shown with the horns of the moon pointing down to the horizon can never happen at night. During the day the sun can be “higher” than the moon, but obviously never at night. The article always says “night” so the seven moons should always be horns-up even if Sandidge was polyopic. Dops that suggest a delusion or fantasy? Maybe, but it turns out multiple and inverted images can happen in migraine aura:
http://www.migraine-aura.com/content/e27891/e27265/e26585/e48971/e49073/index_en.html
Does this help us to understand the Vision of the Seven Moons, do you think?

Then, this other possibility from Chris Aubeck:

http://alchemillahospital.net/wp-content/uploads/2013/05/moons.jpg
http://www.thethinkingatheist.com/forum/Thread-Ranting-corner?page=573
(“I’ve been making images to document my vision loss and/or improvement, so I’m gonna bore you all with another post about my eyeballs. This is why I’m having trouble working on the computer. This is what I see when I go outside at night and look at the moon. Left: What the full moon looks like to my left eye (with cataracts and macular pucker) Right: What the full moon looks like to my right eye (with intraocular lens implant and macular pucker) I have my second surgery on the 30th. I will have monovision after that, and the glare I get from lights, sunlight, etc. will be reduced. And this is why you should never agree to be on corticosteroids long-term. They will fuck up your body parts and your sanity. ^_^”)
We might want to compare it with :
https://en.m.wikipedia.org/wiki/File:Kc_simulation2.png (“I created this image as a person diagnosed with Keratoconus to serve as an example of the visual distortion associated with the disease. These ghost images constantly move making focus difficult. Often, corrective lenses fail to focus light sources in extremely high contrast situations such as at night (e.g. street lights while driving) or if the lenses are dirty/have been worn for a long time.”)

Thank you, Martin and Chris!