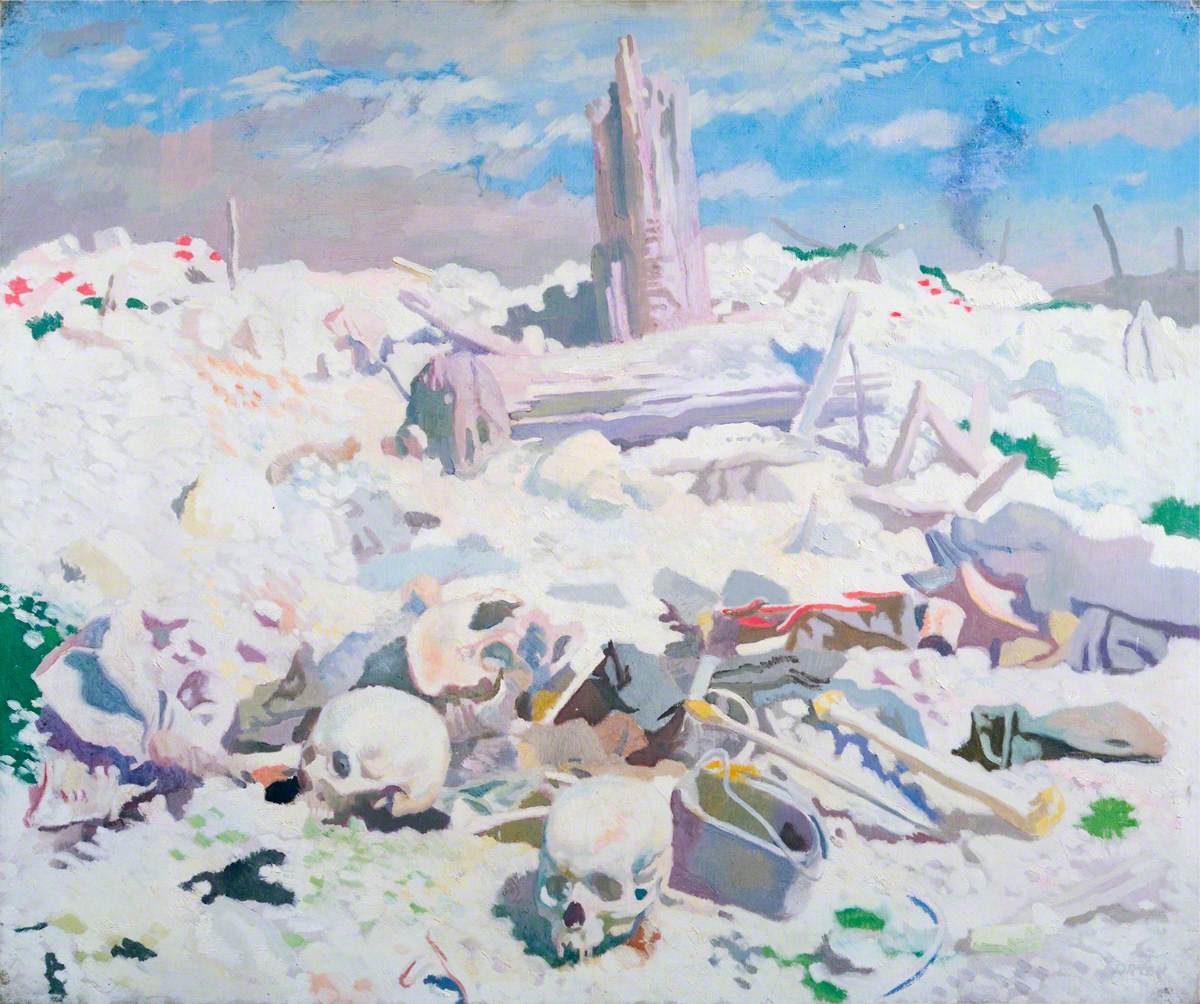 Tomorrow is the 100th anniversary marking the beginning of the Battle of the Somme, one of the bloodiest battles of the First World War. The following year an official British war artist, William Orpen, commissioned to paint portraits of officers, prisoners-of-war, and the ruined landscapes of France, was at Thiepval, documenting the desolation.

I remember that summer a strange thing happened. One day I found, and started painting, the remains of a Britisher and a Boche—just skulls, bones, garments—up by the trenches at Thiepval. I was all alone. My faithful Howlett was about half a mile away with the car. When I had been working about a couple of hours I felt strange. I cannot say even now what I felt. Afraid? Of what? The sun shone fiercely. There was not a breath of air. Perhaps it was that—a touch of the sun. So I stopped painting and went and sat on the trunk of a blown-up tree close by, when suddenly I was thrown on the back of my head on the ground. My heavy easel was upset, and one of the skulls went through the canvas. I got up and thought a lot, but came to the conclusion I had better just go on working, which I did, and nothing further strange happened. That night I happened to meet Joffroy [a French artist, who had lost a leg early in the War], and told him about these skulls, and how peculiar one was, as it had a division in the frontal bone (the Britisher’s). He said he would like to go and make a study of it; so I brought him out the next morning to the place, I myself working that day in Thiepval Wood, about half a mile further up the hill. I left him, saying I would come back and bring him lunch from the car, as it was difficult for him to get about. When I did get back I found him lying down, not very near the place, saying he felt very ill and he thought it was the smell “from those remains.” He had done no work, and refused even to try to eat till we got a long way away from the skulls. I explained to him that there was no smell, and he said, “But didn’t you see one has an eye still?” But I knew that all four eyes had withered away months before. There must have been something strange about the place.

A curiously violent manifestation. It seems as though it would have required a skull shot out of a mortar to break through a canvas. Perhaps Orpen was not, after all, all alone at this site that had seen so much violence and where so many bodies still lay unburied. Should we assume that Orpen was just so used to the smell that he did not notice it? He wrote:

I remember an officer saying to me, “Paint the Somme? I could do it from memory—just a flat horizon-line and mud-holes and water, with the stumps of a few battered trees,” but one could not paint the smell.

Orpen included this illustration in his book, followed by a poem, which I presume he wrote as it has no other attribution. 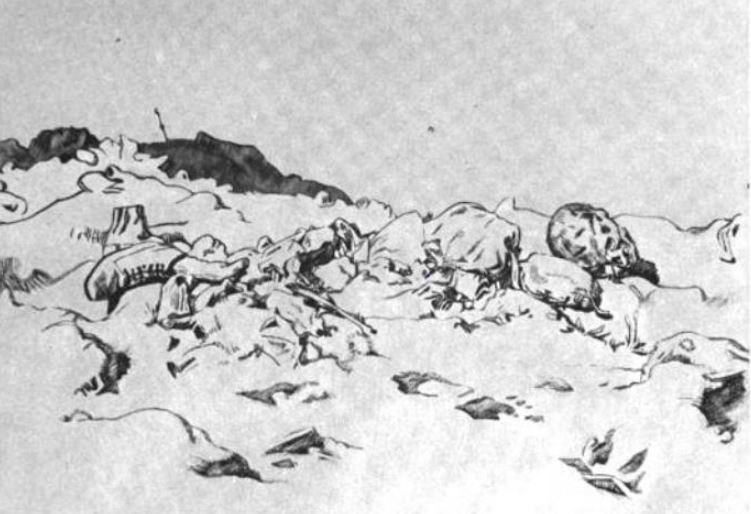 “BEAUMONT-HAMEL”A MEMORY OF THE SOMME

A fair spring morning—not a living soul is near,

Far, far away, there is the faint grumble of the guns;

The battle has passed long since—

At times there is the faint drone of aeroplanes as

They pass overhead, amber specks, high up in the blue;

Occasionally there is the movement of a rat in the

Old battered trench on which I sit, still in the

Confusion in which it was hurriedly left.

The sun is baking hot.

Strange odours come from the door of a dug-out

With its endless steps running down into blackness.

The distance is all shimmering in heat.

A few little spring flowers have forced their way

He lies a few yards in front of the trench.

We are quite alone.

he has been there a long, long time—

Hundreds of eyes have seen him,

Hundreds of bodies have felt faint and sick

Then this place was Hell,

But now all is Peace.

And the sun has made him Holy and Pure—

He and his garments are bleached white and clean.

A daffodil is by his head, and his curly, gold

Hair is moving in the slight breeze.

Some great act of bravery for his comrades and Country—

Here he lies, Pure and Holy, his face upward turned;

No earth between him and his Maker.

I have no right to be so near.

Appropriately, the Memorial to the Missing of the Somme is at Thiepval.