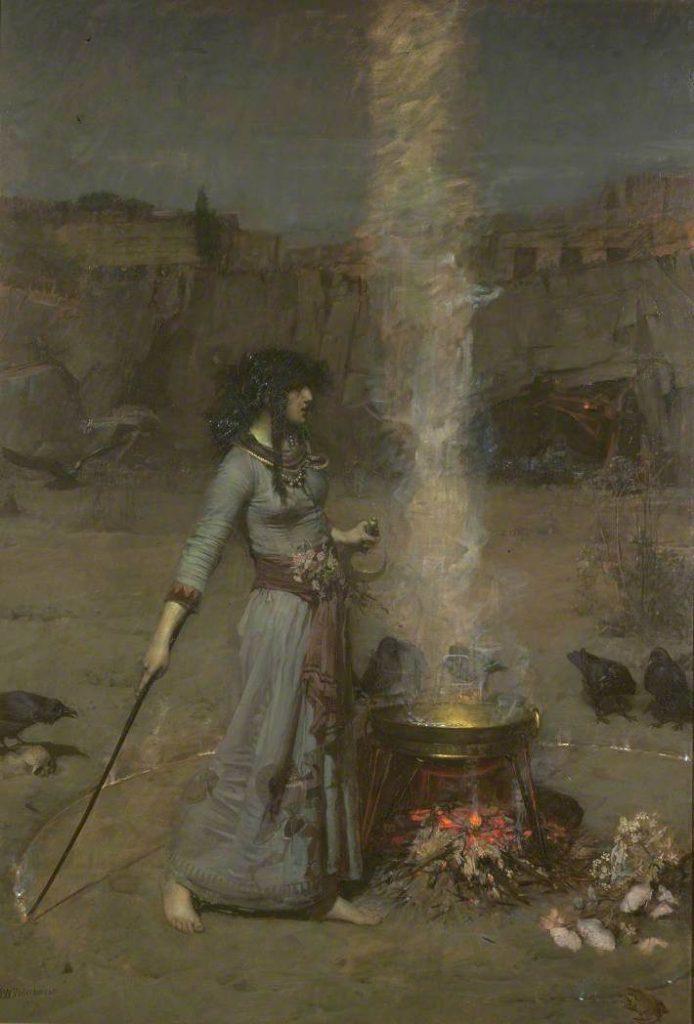 For several months this summer not a day passed without an Amber Alert or a report of some young person who disappeared without a trace. Now that fall is here, we begin to see news reports about “human remains found,” sometimes putting an end to the agonizing wait for the ones who did not return. Today we look at a mysterious disappearance and death from the early years of the nineteenth century. Much is hinted at; many mysteries remain.

A well-authenticated and most mysterious occurrence, and one which has always left in the minds of the residents of Rockland County a strong inclination to credit a belief in witchcraft—I confess to something of the kind myself—took place in my father’s school-day time. I have listened to his recital with staring eyes, ready to catch the slightest incident connected with it.

Mrs. Hopper, a very beautiful woman, was possessed of some very strange power. It was said that even when quite young she would perform strange feats with children who were in the habit of associating with her; and it was clearly ascertained that she had been seen in different places at one time.** I cannot say anything of my own knowledge of all this, but there is no doubt of the facts which I am about to relate.

Mrs. Hopper had not appeared in her usual spirits for several days. She complained of not feeling well, wished to be left to her repose, and appeared to be looking forward to something they could not comprehend. One of her bridal gifts was a favorite colored boy, a lad about seventeen years of age at the time of her departure. (Slavery still existed in New York.) [It was abolished in 1827.] She was an only child and much petted by her parents and friends.

Her mother, on learning she was ill, went to spend a few days with her, in the hope of cheering her spirits and benefiting her health. One afternoon she seemed more than usually restless, and called to Jack (the colored boy) to bring his hat and coat to her to repair them. While mending his clothes, she said to Jack, “Who will mend your clothes and care for you when I’m gone?” He tried to console her, and said, “You ain’t a goin’ to die, Missus, you’re too young.” She told her mother she needn’t stay with her as she was quite well and her mother was needed at home.

She also told her husband she would rather he would sleep in another room and leave her alone that night. They all complied with her wishes. The next morning her husband found the doors ajar, and on entering the room discovered that her bed had not been slept in, and on closer examination discovered her comb and pins on the stove and all her wearing apparel torn open (in front) from head to foot, and lying on the floor just as they had been stripped from her body. They searched the house and barn but could not find her. They explored the neighborhood, but no trace of her nor footprints could be found. The neighbors turned out to hunt for the missing woman. School was dismissed and the children joined in the search.

Near the place where she lived was a swamp. (My cousin took Mr. Underhill and myself to see the house. It is a short drive from his home “Mountain View House.”) The swamp named was quite extensive at that time.

The party hunted three days; taking horns along, which they sounded, whenever they strayed apart, to call them together again.

I believe it was my father’s aunt who first discovered the body of the missing woman (which they had traced by her hair; some of which they found hanging in the limbs of the trees). Her body was lying on a dry elevation, in the swamp, in a state of entire nudity; and so surrounded by mud and mire that they were obliged to make a log-way to enable them to reach and remove it. My aunt removed her apron and covered the body with it.

Her story is still repeated by many of the oldest inhabitants, and to-day remains no less a mystery.

I believe she had covenanted with evil Spirits, and the time or limit of her agreement was ended.

“Try the Spirits. By their fruits ye shall know them.”

Never yield your judgment to Spirits, however good they may be, unless you are sure you are doing right. Obey the small voice within, and always bear in mind that the highest gift from God is your own good sense. So say my guardian Spirits.

**The mysterious phenomenon of “the double “—called by the Germans doppelganger, and the subject of various German tales—while one of the most calculated to provoke incredulity, is undoubtedly an occasional reality. I have heard more than one person whose veracity I cannot doubt relate how they have been seen at the same time in places hundreds of miles apart. Any one may inquire of Mr. E. H. Britten on this subject. Undoubtedly such persons are mediums.

Well, leaving aside that comment about yielding judgment to spirits, as voiced (oh, the irony) by Mrs Underhill’s guardian spirits  (she was one of the three Spiritualist Fox sisters), some of the details of this story are terrifyingly like those told by David Paulides in his Missing 411 series—persons found nude and in inaccessible places. This story is silent on whether Mrs. Hopper’s body was muddy or not–some of the disappeared are found mysteriously clean in muddy/swampy areas. See this previous post, “The Lost Children,” about mystifying features found in 19th-century disappearance cases.

There seem to have been a number of swamps in Rockland County: Greenbush, Hackensack, Cranberry, Squirrel, and Bear’s Nest Swamp, said to be a bottomless morass of quicksand. There was also a swamp known intriguingly as “Old Woman’s Hole.”  I have not been able to locate “Mountain View House.”

What do you suppose is meant by those “strange feats” performed with children? And was a cause of death ever determined? Or was this just a family tale spun by the father of the “Mr-Splitfoot” Fox sisters?