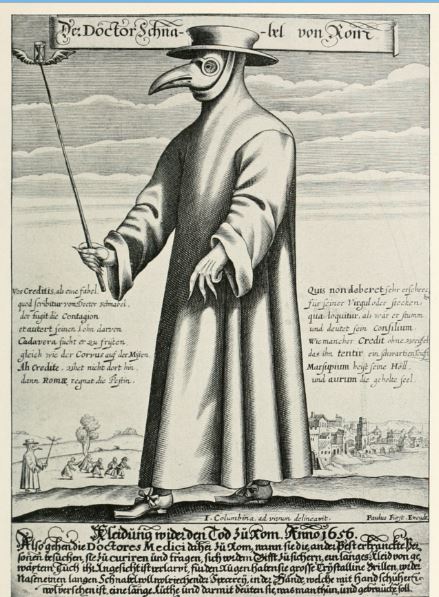 The images of those brave souls working among the virus-stricken in their ghostly protective suits called to mind this bizarre story from 1903.

She Believed the Officer

Who Came To Investigate a Report of Smallpox

Poor Woman So Scared By the Hideous Apparition

That She Died in Terror—Her Toledo Relatives Now Threaten a Damage Suit.

Toledo, Ohio, February 4. Haunted to death by a hideous apparition was the fate which befell Mrs. Joseph Smolinski, of 1207 Nebraska avenue, according to the story told by her husband and other relatives.

Mrs. Smolinski was 33 years old, well educated, pretty and the wife of a well-to-do mechanic. Her death occurred last Saturday, and it was pitiable in the extreme.

About a month ago Mrs. Smolinski became ill with pneumonia, but by careful treatment rapidly recovered. Following her recovery the outer skin on her hands began to peel off, as is invariably the case following fever attacks.

Some of the neighbor women who visited her, noticing this condition of the woman’s hands, informed the penthouse authorities that the woman had smallpox. Then began the trouble that resulted in the woman’s pathetic death. Following the report of smallpox an agent of the Health Department, clad in the outlandish though necessary apparel of the physicians who daily visit the penthouse, entered the home of the Smolinskis.

The sudden appearance of a fierce-looking object, helmet topped, clad in an oil-cloth suit, with a sponge at the mouth hole and a pair of slits for the eyes, for all the world resembling a deep sea diver, suddenly appearing before the woman startled her. She had never heard or seen such an object in her life. The only thing she could imagine this peculiarly uniformed health officer resembled was the evil one, and that belief at once took possession of her mind, and all that medical skill could do failed to remove the impression first formed.

The next day it was found that the woman had no smallpox, and the Health Department did everything possible to correct the blunder, but too late to save the woman’s life. The vision of that strangely garbed health officer haunted the poor woman night and day for two weeks, until death mercifully relieved her from her awful sufferings from fear and terror. The most powerful opiate failed to have any effect on the woman.

She either sat up or laid in bed wildly staring about the room, and at intervals trying to shrink back, as if fearful of the too near approach of the awful apparition that constantly haunted her. Friends tried to explain to her that the awful thing was harmless or had vanished, but all their efforts could not influence the mind which seemed possessed of only that one impression.

At time the woman would become so terror stricken at what seemed to be before her that she would shriek out in pain and beg those around her to protect her from the awful monster. Nature’s strength finally gave way and the woman collapsed, but even in death her last struggles were used to save herself from the apparition. The woman’s relatives, who are wealthy, have secured counsel, and say they will bring an action for heavy damages against the city of Toledo on the ground that Mrs. Smolinski’s death was caused by the blundering conduct of an agent of the Health Department. Besides a husband, the deceased leaves five small children.

Certainly I’d seen the beaked Plague-doctor costumes of the Renaissance, like the illustration at the head of the post, but for some reason I didn’t think that protective clothing was being worn by public health officials in 1903. I was unable to find a 19th or early-20th century illustration of a suit such as terrified the unfortunate Mrs. Smolinski.

Note the “well-educated” and “well-to-do” in practically the first paragraph. An Eastern European name usually led to an assumption of ignorance and superstition. There had been a flood of Russian and Eastern European immigration to the United States after 1870 and fears were rife about anarchists and foreigners with unpronounceable names, odd customs, and smelly foods overrunning decent peoples’ neighborhoods. It is no accident that the “Devil Baby” legend grew up about this time.

In the 1910 census Smolinski was listed as age 46, widowed, living with seven children: five daughters and two sons in Toledo in. I have not found any record of a lawsuit filed against the Health Department.

Previously I wrote about people who were supposedly scared to death. Any other examples? Send to Chriswoodyard8 AT mail.com, being careful not to sneak up on her and tap her on the shoulder unexpectedly.