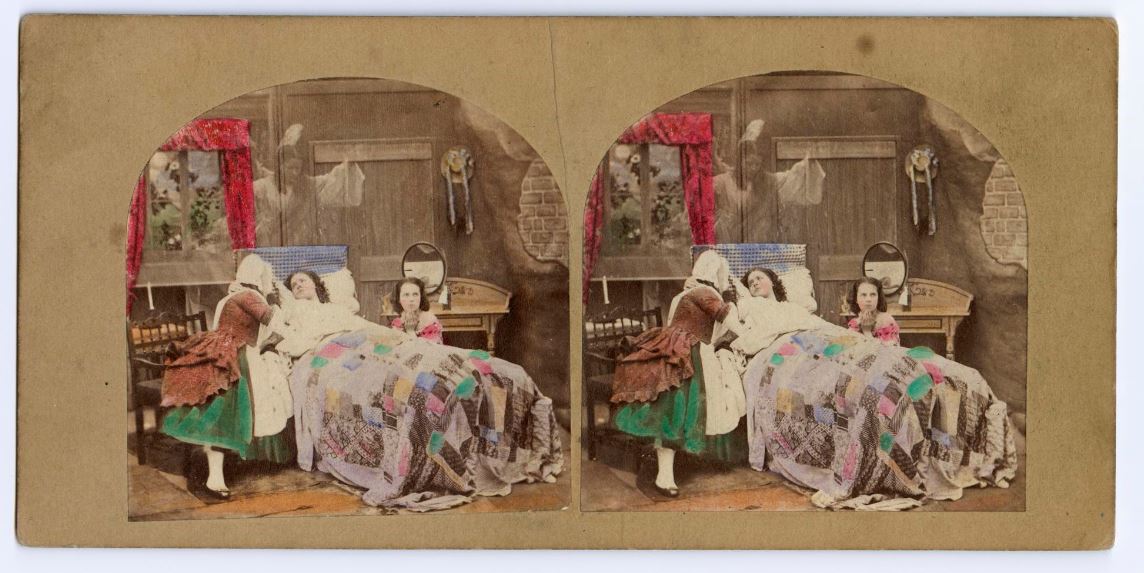 May Queen Crowned in Coffin Stereocard showing The May Queen in Tennyson’s poem on her death-bed http://www.nms.ac.uk/explore/collection-search-results/?item_id=20029777

You didn’t really think that I could let a beautiful, uplifting spring frolic like May Day pass without relating it to something grim n’ grewsome, did you?

Frock Made for Celebration of Tuesday is Her Shroud and Crown a Wreath in Memory.

Miss Isabel Porter, eldest daughter of Mr. and Mrs. Tom Porter, of Biltmore, died yesterday morning at 9 o’clock at her home, the old Cheesborough place, on the Swannanoa river.

The circumstances surrounding the little girl’s death make it one of particular sadness. Tennyson’s lines, “The May Queen,” are applicable, for sweet-faced, popular Isabel Porter had been chosen from her schoolmates for “Queen” at the May Day celebration to be given by the pupils of the Biltmore Parish school on next Tuesday, and now, by the death angel’s visit, her funeral will take place on today, May Day. As the chosen queen in Tennyson’s poem, she died before the honor bestowed by her schoolmates could be completed by the crowning.

Miss Porter had been ill for a week or two with pneumonia, but until a few days ago it was thought she would recover sufficiently to take her place at the May pole, when the festivities should take place. During the last few days and nights her mind had wandered constantly to the May Day celebration and she talked of the dress in which she was to be crowned and of her mates and teachers and their preparation for the celebration.

The funeral will take place this afternoon from the late residence. The honors of the May Queen will be given her by a large coterie of her school mates. The dainty white frock she was to have danced in as Queen is a burial robe and the fingers of her little friends have woven a crown of flowers that will rest upon her head just as it would have crowned her in the glad celebration.

Rev. Mr. Crutchfield will have charge of the ceremony.

The May Day celebration will be held on Tuesday, because of circumstances which make it almost impossible to postpone it, but out of the love for the dead queen and respect for her memory, the part of the celebration pertaining to the queen, will be omitted.

It is a pity that Dickens died in 1870. What a death-bed he could have conjured from this poignant story….

The ritual of crowning the May Queen has been said to go back to the Middle Ages (earlier, if you believe James George “Golden Bough” Frazer.) The folk-holiday continues in England and Canada. I remember it being a religious holiday at Catholic schools, where a statue of the Virgin Mary would be crowned with a wreath of flowers.

This parody is based on the old chestnut, “The May Queen,” by Alfred Lord Tennyson, which was quoted in the press and recited ad nauseam in drawing-rooms until one wanted to scream. The anonymous Punch contributor has captured perfectly the thumpety-bumpety scansion of the original, which ill-accords with the lingering death-bed and morally uplifting sentiments found in the last two sections of the poem.

It was something of a joke that May-day weather in England was always inclement. In 1876 and 1877, records show that the day was either snowy or very wet.  It was no wonder that May Queens died from chills, consumption, or pneumonia. Mrs Daffodil has previously posted an amusing cartoon sequence on the Ideal vs. the Actual May-Day, dating from 1878, when the weather continued perfectly foul.

Other tragic May Queens? chriswoodyard8 AT gmail.com