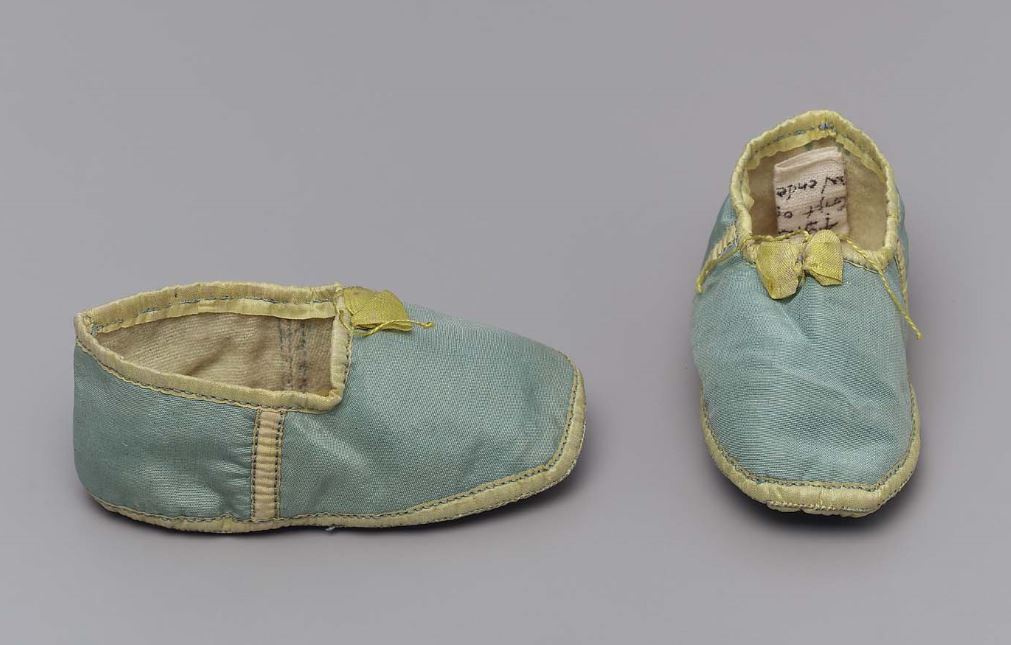 Black and white crape on the door;

No more the patter on the floor,

Of those little feet so dear,

Does the loving mother hear.

Black and white crape on the door,

Crape on the door.

Empty baby shoes and tiny feet figure heavily in the sentimental mourning doggerel of the nineteenth century. Infant mortality was high; while mother and babe often shared the same coffin. Such motifs—and such a tragedy—set the stage for this story of a (mostly) aural haunting.

From the Louisville Journal.

Forty years ago there lived on Blue River, in Indiana, a venerable man of German descent, by the name of R., with his wife, also well stricken in years. Mr. R. was a highly respectable citizen, well to do in the world, and settled and opened his Farm on Blue River before it was a State. His house was a large two story building of hewn logs, two rooms above and two below, with a two-story gallery in front, running the whole length of the building. This ancient couple had two daughters, their only children; handsome and attractive. The elder, when about twenty, was married to a young gentleman, who resided some eight or ten miles from Mr. R. The young couple lived together happily for about a year, when the young wife came to her parents’ house to be confined. Two or three days after the confinement the mother and infant both died. This was a sad blow to all. The bereaved husband and father was overwhelmed with the affliction. While he was a widower, he spent much of his time in his father-in-law’s house. About a year after his bereavement he married Mr. R.’s second daughter, with her parents’ consent and took her to his own home, leaving the old couple alone.

One warm autumn evening in the year 1820, old Mr. R. sat alone in his gallery, while his wife was engaged about her domestic concerns in the house. About dusk a stranger rode up and alighted from his horse, and approaching Mr. R. asked him if he could be entertained for the night. Mr. R. agree to entertain the stranger, and desiring him to be seated, took the horse to the stable, and returned to the gallery where the stranger still sat. Mr. R.’s account of the stranger was that he appeared to be a middle-aged man, of medium size, his air slightly gray, of spare make, but to all appearance active and alert. He declined the invitation to supper, and retired at an early hour. His bed-room was up-stairs, and he also declined the candle offered him. The family retired, and heard no more of the stranger for the night.

Mr. R., as usual, rose early next morning, while it was yet dim twilight, but early as it was, he found the stranger up and equipped for his journey. The horse was brought to the gate, the stranger offered to pay, but Mr. R. refused. When about to leave the stranger said he was in great doubt whether or not he ought to inform his host of what had occurred to him during the night in his room, but he felt it a duty to do so. The stranger then informed Mr. R. that he had gone to bed, and lay with his face to the open window near him; the moon shone so brightly on the window sill that he could see objects distinctly, and while thus lying and looking out at the window, he saw an infant, to all appearance newly-born, pass in at the window to the room where he lay—that he heard it walk the floor—that it repeatedly passed down and up the stairs—that he could distinctly hear the steps on the stairs, and that it continued to go about the chamber, and up and down the stairs all the night, and that at the first crowing of the cock for daylight it passed out at the window at which it had entered, and disappeared. The stranger said he had not slept during the night; that he was under no delusion, but in his sober senses had seen all he had related.

Mr. R. felt much astonished at this account, and while musing upon it, the stranger mounted his horse and rode away, and Mr. R. saw him no more. Mr. R. could not account for the stranger’s story, only by the supposition that he had dreamed, or that he was deranged. He did not inform his wife what he had heard.

Night came again, and Mr. R. proceeded to the chamber where the stranger had slept, and seated himself quietly on the bedside. He waited some time and neither saw nor heard anything to confirm the strange story, and was in the act of rising to proceed down stairs, when he distinctly heard a light, hasty step, like that of a small child, coming up the stairway from the room below. The moon partially lighted the room he was in. The step seemed to come into the room, and to pass about it as if seeking for something, it went down the stairs again as it came, and presently returned again into the chamber. All this Mr. R. could hear plainly, but he saw nothing, though the sound of the little feet was around him, and often very near him. To satisfy himself fully as to the source of this mysterious footfall, Mr. R. went downstairs and returned with a lighted candle. Again he heard the footsteps, but they did not now come into the room, but passed up and down the stairs, and walked in the room below. Satisfied at length that he could not see the mysterious walker, or account for the sound of its step, he proceeded to his wife’s apartment and informed her of the strange events of the day.

For a considerable time Mr. R. kept his secret, but did not relax his efforts to discover the cause of the mystery; but all his efforts proved ineffectual, and still the footsteps haunted the chamber and the staircase, and walked the house in darkness, evading the sight of all but the stranger who gave Mr. R. the first information of the nocturnal visitant. But it began to be whispered among the neighbors that Mr. R.’s house was haunted. As usual in such cases there was a rush to the scene of the all-absorbing mystery.

In this condition of things, Mr. R. called on the minister and elders of his church, and invited them to visit his house and to witness the supernatural phenomena, and aid him in the detection of the trick, if one were being practiced on him, or in some manner unravel the dreadful mystery. An evening was fixed on for their visit, and they all attended, and it was from the lips of the venerable minister that the writer learned the particulars for the story.

The company that met was eight or ten in number, elderly and sedate Christian men. After solemn prayer and exhortation, they proceeded to their stations and awaited the coming of the mysterious visitant. They did not wait long. The step was directly heard on the floor of the upper room, the company then being below. As they approached the stair door with lights, the steps were heard ascending the stairs, and again on the floor of the upper room; pursuing the sounds of the mysterious feet with their candles, they came into the upper room; they saw nothing, and pausing again, heard the little feet tripping down the stairs behind them. They then descended again to the lower room, and finding nothing, were surprised to hear the same mysterious sound in the chamber over their heads. The company then divided, a person going into the chamber, and each company carrying lights as before; the steps were distinctly audible on the stairs, going constantly up and down, but not entering either room.

The minister then went to the staircase in the lower room, and posted himself so that the light of his candle shone on a part only of the flight of steps, leaving the remainder in comparative darkness. The little feet descended the stairs until they came to the last step, on which the light did not shine, then changed their course, and were instantly heard in some unlighted part of the house, sometimes above, sometimes below: often in the galleries, but mostly on the stairs, if the lights were absent.

Varying their experiments, they extinguished all the lights and sat together, sometimes in one room, sometimes in another; and still the footsteps passed about the house, moving around them, and even in their midst. Again and again the minister, solemnly, in the name of the living God, invoked the strange visitant to speak, and tell its errand, and why it walked in darkness, disturbing the inhabitants of the house,; but no reply was received, and the little feet still moved about through every part of the house; as if seeking for something, or some person who was not there. The minister then seated himself on the stair, sitting crosswise, extending his feet so as to occupy but a single step of the stairs—the lights were all removed so that the stairway was left in darkness. The footsteps came and went up and down, touching apparently on every step of the stairway except the one occupied by the minister, and passing silently over that one.

The company remained all night; they examined the premises thoroughly, from garret to cellar, but nowhere could they discover the source of the mystery.

A short time after this the venerable minister related to me the facts as I have detailed them here. I have never heard that there was any solution of the mystery, but if this paper is published it may meet the eye of some one capable of furnishing the explanation. I do not consider it a ghost story. I do not believe in them; but there are phenomena difficult to account for without the intervention of supernatural agency.

Footsteps on the stairs are one of the clichés of ghost stories, but only rarely are they those of a tiny child. We might discount the impossible pitter-patter of a new-born baby’s tiny feet, although the Spiritualists would promote the comforting idea of lost infants growing up in the nurseries of the afterlife. It was certainly better than a child walking in darkness, searching eternity for its mother.