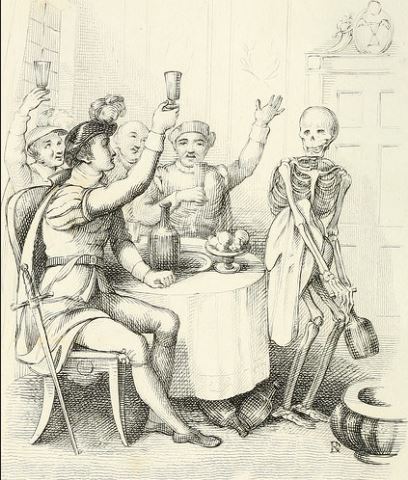 Inspired by the story of a woman taking her dead husband on a “rolling wake” Alaskan road-trip, preserved in ice from the local fisheries, I present some vintage fizz about stiff iced drinks.

Took the Ice Off a Corpse.

Charlotte, N.C., June 13. The guetss of the Phoenix hotel at Winston, rose in revolt against George W. Kittelle, the proprietor of the hotel, a few evenings ago, because they learned that the ice used in their iced tea and other cool drinks had been first utilized in cooling a corpse. The result is that Kittelle’s troubles multiplied, and the news has just come of his assignment. It was claimed that a rubber sheet was between the ice and the body, and that the cooling material was not therefore injured in any way, but was as pure as ever. The guests could not see it that way, however. The corpse in question was known in life as Charles Johnson. Daily Illinois State Journal [Springfield, IL] 14 June 1895: p. 1.

We might assume that this was just a tasteless joke (although the hotel and the man are real) but there was apparently a certain amount of laxness in this area. I’ve seen several references in the medical literature to the following practice:

As an illustration are cited cases in which the ice used to preserve bodies dead from contagious disease was emptied out on the public street…. Medical Record 1891: p. 263

No doubt for the children playing in the streets to pick up and suck.

And here’s a poem with a twist. Memorize it! recite it at parties! I guarantee you’ll have your audience shaken and stirred.

One reason I stopped drinking.

Said the man from Lafayette,

Is no matter what you call for

You can’t tell what you get.

It was in July of ninety-four.

While traveling in the West,

I witnessed what I’ll not forget

‘Till I am laid to rest.

The run was long and tiresome,

The scenery not sublime.

So a game of cards was started,

Just to pass away the time.

The players, four in number.

Were traveling men, I think;

And one sold printers’ ink.

Across the aisle a stranger sat

Who hadn’t much to say.

He smoked when the cigars were passed

And calmly watched the play.

“Tell you what,” said the liquor man:

“In my case I’ve something nice.

We’d have a most delicious drink

If I only had some ice.”

“I’ll get the ice,” the stranger said

And he started for the door.

He soon returned with a basketful

And placed it on the floor;

The drummer then mixed up a drink,

And I tell you it was fine.

It made us all quite sociable

And the stranger was right in line.

Several trips the stranger made

He finally came with a basket full

And said it was all he could spare.

And his voice was low and deep;

“I’ve got a corpse in the baggage car.

Can anybody top these stories of stiff drinks? Pour it on: chriswoodyard8 AT gmail.com

Thanks to Michael Robinson for the Alaskan story.

For chilling stories of the perils of undertakers with ice-boxes, see this post.

Brian C. sent some variants of the “corpse on ice” theme and a cautionary tale for travellers.

Here are some variants of “The Corpse in The Cask/Tapping the Admiral” that are related to “A Stiff Drink.”

One hot day in the desert the passengers on the Meekatharra Mail were relieved by the kindness of the guard bringing everyone a drink of ice water. As the day got hotter and the air drier, the passengers continued to quench their thirst with glasses of ice water provided by the guard. But after a few hours, the welcome chilled fluid stopped coming. As the guard passed along the passageway on his duties, a thirsty passenger inquired why the ice water had dried up.

‘Sorry,’ replied the guard, ‘I thought we’d better not drink any more – the body’s beginning to show through the ice.’

Where He Got the Ice

There was a party of gentlemen the other day on a train on one of the roads coming into Nashville, and none of the party being strictly temperance men, one of the crowd suggested a drink. Another wanted to know where to get it. All seemed willing, but the day was warm, very warm. At last the fourth man in the party said he had a bottle of fine “cock-tail,” which he would furnish if anybody could get ice. A fellow passenger remarked that he would do that if they would share with him. He left the car and came back with plenty, which was duly used. As a matter of course, in a short time another drink was proposed and the ice man kindly requested to furnish that necessary article to a cocktail, but with his mouth watering for a drink and every look one of longing, he said: “Gentlemen, I want the drink, and I could furnish the ice, but I am afraid if I take any more off the corpse it will spoil.”

My friend swears that he is the hero of the story of the four chance acquaintances who launched a bridge game on a mid-summer run of the Empire State Limited. They ordered frequent rounds of drinks, but finally the steward reported that the ice had run out. “I think I know where I can get some,” volunteered my friend, and supplied the party until the train was well past Schenectady. “I’m afraid this is the last pitcherful,” he said then. “If I take one more cube of ice, the body won’t keep till Buffalo.”

The legend lingers to this day.

[…] Says Poonam Bachhav, microbiologist and chief of the water testing lab at the Institute of Health Systems, “We have tested a lot of samples of water taken from various street food vendors from around the city, and 80% of the time we discover that the water is unsuitable for drinking.” And then there’s ice. Stories that the ice used by street food vendors comes from the morgue might be more urban legend than fact, but the reality isn’t all that much of a step up. Ice is usually manufactured in locations many of which are at quite a distance from the city. So even if one ignores that few ice manufacturers follow all the rules and regulations set by the health ministry, the fact remains that the ice is transported in filthy conditions only to arrive at a store where it is just lying on the grimy floor, covered in rice husk, what appears to be sawdust, and what not. “We haven’t received many samples of ice for testing, but of those that we have received, most are unwholesome”, says Poonam Bachhav. “I think it is very unadvisable to eat or drink anything served by street vendors.” […]