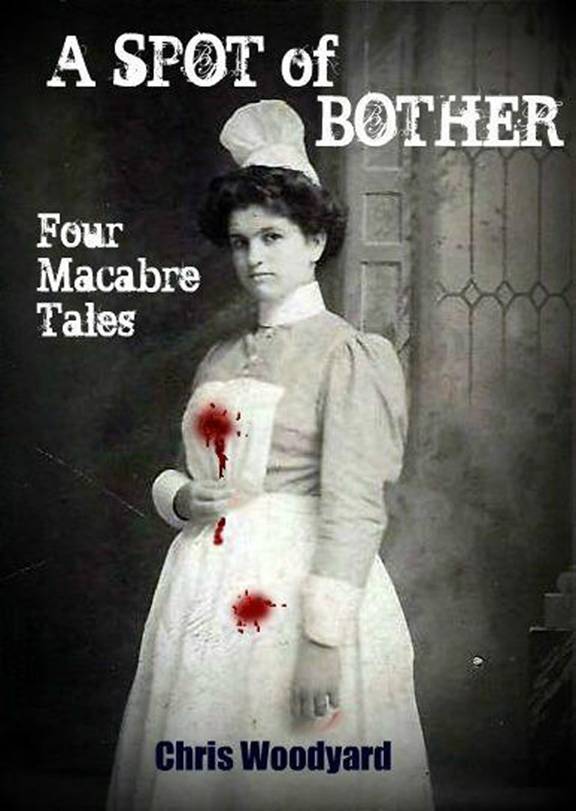 A Spot of Bother: Blood Materializations [No, the book pictured is not about the materialization of blood; it is short stories. With some bloody bits. And this fab cover by Vermont ghost-writer and Renaissance man, Joseph A. Citro. ]

One of the most fascinating stories I ever read was that about an elderly couple who, one day found their house shockingly spattered with enough blood to suggest murder by exsanguination. But there was no corpse to be found; neither showed any obvious wounds; they were certain no one could have entered their house. I was hopeful that the next day the blood would all disappear a la the blood that stained Eleanor’s room and clothes in The Haunting of Hill House, but tests of the blood showed that it belonged to the lady of the house, who had a small varicose ulcer that had bled copiously without her noticing(!?). Apparently there have actually been deaths from ruptured varicose veins.

In today’s sanguinary saga, a gentleman writes of a mysterious rain of blood that drenched his writing-table.

THE MATERIALISATION OF BLOOD.

Have the readers of ‘Light’ any knowledge of such a phenomenon as that which I am about to relate occurring in other haunted houses? Biblical narrative tells us of the plague of blood in Egypt; and in R. L. Stevenson’s ‘South Seas/ page 194, he mentions among the local superstitions that stains of blood on the walls of a house are supposed to follow the visitation of a spirit, who, after cannibal fashion, waits to devour the souls of the dying. [See this previous post for this spirit, the Varua Ino.]

I was once told from the other side, that of all fluids blood is the easiest to materialise, ‘as there is plenty of it ready made in the veins of every medium.’ How this may be, and whether in the following instances I was the medium from which it was derived, I cannot say. My first experience was as follows, and occurred about fifteen years ago in the house where I now reside.

I had been occupied at my writing table one afternoon in full daylight, alone, except for the company of a cat and kitten, sleeping together in the armchair. I went out of the room for a short time, leaving the sheets of paper at which I was working spread out on the flat top of the table. I closed, but did not lock the door; the windows were all shut. I afterwards ascertained the whereabouts and occupations of the other members of the family, and can say positively that nobody in the flesh entered the room during my absence. When I returned the furniture was undisturbed, the cat and kitten were asleep as I left them, but a perfect rain of blood had descended upon the writing-table. The white papers showed thick spots, fully the size of a shilling, evidently dropped from a height, as each spot was surrounded by a fringe of splashes. The inkstand, pen-tray, and other small articles which have their place on the table, were similarly stained; indeed, I doubt if a square inch of the leather top had escaped, except where covered by the open papers. The table is of the ordinary knee-hole pattern, with a pillar of drawers to right and left; and the fronts of these drawers and their handles were daubed over with the blood, here as if smeared, but over the top dropped in a rain. I called a confidential servant, and between us we made an exhaustive search, discovering I absolutely no explanation of the mystery; also that nowhere else in the room was there the slightest spot or stain. The Indian carpet had a white ground, and the chintz covers were pale in colour, and would readily have shown any such mark. My servant brought water and a cloth, and washed the table for me; but I preserved some of the stained paper, which was afterwards (through the kindness of a friend) submitted for analysis. The stains were pronounced to be human blood!

I will give another instance of the appearance of blood in the same house, though in this second case the quantity was small. We are from time to time disturbed by a ghostly scream, sounding from a passage-landing on the first floor. On this landing hangs a framed engraving fronted with glass. The scream sounded loudly between 3 and 4 am, heard by several of the household; and when we got up at the usual hour for rising the front of the picture was found marked from top to bottom with a thick streak of blood, terminating in a little pool lodged upon the frame. The bloodstain was conspicuous; it would have been impossible to pass the picture without notice, and it was not quite dry when found.

These byegone events were brought to my mind a few days ago. A letter was handed to me by my niece, the envelope being clean except for ordinary soilure in passing through the post. I turned it over, looking at the address before opening, and as I held it, it was suddenly smeared on both sides with fresh wet blood. My hands were absolutely without scratch or wound, and so were my niece’s; I know also that when the envelope was given to me, it was defaced with no such marks.

I shall be glad to hear of any parallel cases to the above.

Surely the obvious suspects would seem to be the cat and kitten, but could they have killed a prowling mouse and so thoroughly smeared the writing-table without getting blood on the carpet or furniture covers? The author says that the blood was tested and found to be human, but he must have had some exceptionally advanced international scientific contacts. The Uhlenbuth test, which distinguishes human from animal blood was developed only in 1901. Was there a prior, perhaps less definitive test?

Mr Sholto seems to have taken this in his stride. (Such insouciance in that “We are from time to time disturbed by a ghostly scream”!) In an earlier number of Light, in the context of animal survival, he told of another apparition at the residence where the blood appeared and seems rather proud of his “haunted house”:

If I do not trespass too far upon your space, I may touch, in concluding, on a phenomenal experience, which in my opinion points to brute survival; and in a case which could not have been specialised by affection between beast and man, I live in a haunted house, built on a plot of ground which has enjoyed that doubtful reputation for two hundred years. Apparitions, human and animal, have been visible to many witnesses within doors and without; but I would now instance one only—the appearance of a wolf. Nothing in the history of the house or of its site suggests this creature, and, if revisiting the locality of its birth, hundreds of years must have elapsed since it lived and died. But here it still persists, and is occasionally visible, I hope when I die to carry with me that key of sympathy which will unlock the sphere of ‘my brother the brute.’ [Light 26 January 1901: p. 48]

Undine, of Strange Company, has made rather a speciality of mysterious blood cases, such as this one at North Brewster, New York, and this combo bloody-bathtub-and-bones-in-the-furnace case from Mooresville, North Carolina. I wrote about a San Francisco Woman in Black who left a bloody handprint and a bowl of bloody water in The Ghost Wore Black.

Other plagues of blood? Would modern CSI techniques be able to detect a difference in human- vs. spirit-splatter?  chriswoodyard8 AT gmail.com

Mary writes:  A friend of mine was in the shower shaving her legs and scraped open the skin enough to expose her varicose veins. They ended up calling the rescue squad because she was bleeding so badly. The EMTs got the bleeding stopped but said there was no point in transporting her because it couldn’t be stitched. They wrapped her up and told her to sit still with her leg elevated.

[I had no idea that varicose veins were so dangerous! But having run across photos in a medical journal report on the death mentioned in the first paragraph, they create a terribly gruesome scene for anyone hapless enough to find the victim.]