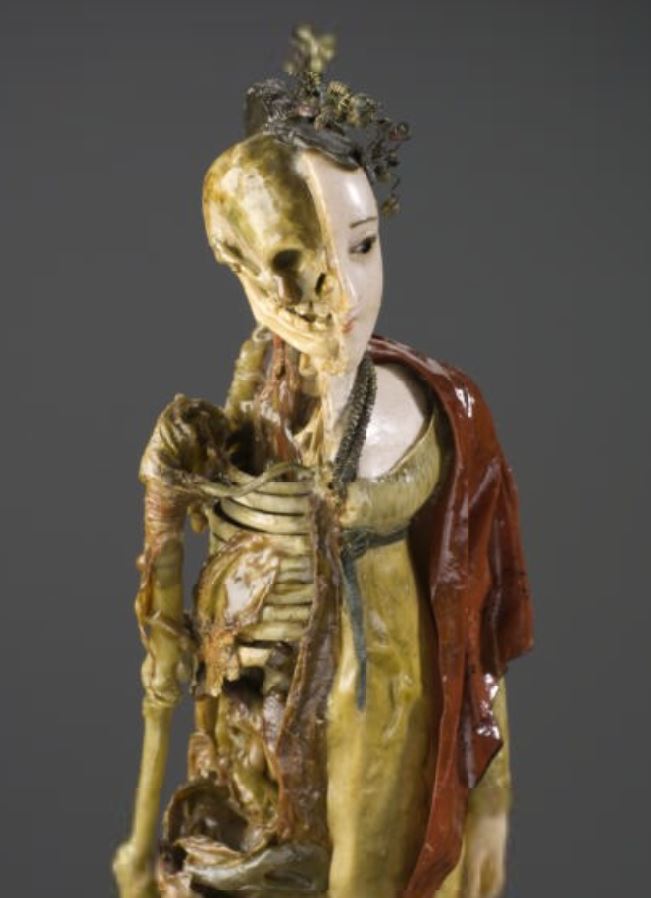 The Waxen Effigy of a Child A wax memento-mori figure. Half woman; half skeleton anatomical figure, c. 1810-1850 https://collection.sciencemuseum.org.uk/objects/co77138/coloured-wax-model-of-a-female-half-skeletal-half-living-and-dressed-in-regency-clothing-england-1810-1850-anatomical-figure

Just as demonic dolls, and haunted paintings are at the core of all paranormal museum collections, a haunted statue or two always adds cachet. This would preferably be an “idol” from some far-off land, plundered from a temple or purchased from a mysterious vendor in a bazaar.  Bonus points for a curse.

Today’s Object of the Damned—a horribly realistic wax figure—not only has a curse, but a dreadful origin story.

Connected with this subject of family curses is a story I heard not long ago, of a certain country house in one of the Eastern Counties. On the landing of the principal staircase of this house there might be seen, a few years since, a glass case covered by a curtain, which, if drawn, revealed the waxen effigy of a child, terribly wasted and emaciated, lying on her side as if asleep. It was described to me as so realistic as to be quite horrible, and it is apparent that some very strong reason must have existed for keeping so unpleasant an object in such a thoroughfare of the house. Its history is this. Some generations ago, the wife of the owner of the place died, leaving motherless a little girl. The father soon married again, giving his child a cruel stepmother, who, in her husband’s absence from home, so ill-treated and starved the poor little girl that very soon after her father’s return she died. It is said that the facts of his wife’s cruelty reached the father’s ears, and in order that he might punish her with perpetual remorse, he had a wax model made of his child exactly as she appeared in death, and placed it conspicuously on the staircase landing, where his wife must see it whenever she went up or down stairs. He further directed in his will that the model should never be removed from its place, adding that if it were, a curse should fall on house and family. So, covered in later years by a curtain, the effigy remained until a day arrived in quite recent times, when the family then in possession were giving a dance, and for some reason had the case containing the wax-work carried downstairs and put in an outhouse. But mark what happened. That very night occurred a shock of earthquake violent enough to cause part of the house to fall down! Very likely mere coincidence; but as it might have been the working of the curse consequent on the removal of the case, it was thought advisable to restore the grisly relic to its former position, where, as far as my informant knew, it may be seen to this day.

If the story is true, you’d think that the grief- and guilt-stricken father would have at least locked the stepmother in the oubliette to starve to death. Instead, his idea of justice for his daughter was a passive-aggressive piece of art.

The art of wax modeling was well-developed in England and, indeed, throughout Europe even before Madame Tussaud brought her collection of severed heads to England. Gruesomely accurate wax effigies were used to train medical students, illustrating the direst wounds and conditions, as well as depicting muscles, bones and organs in vivid color. The medium was uncannily realistic and was often used for funeral effigies. (The examples at Westminster Abbey are perhaps the best known, some of them dressed in the clothes they wore in life.) The brief account above does not say whether the child’s effigy was dressed.  If it was not, one wonders if it was some sort of misunderstood anatomical figure collected on the Grand Tour—Italy excelled at wax-works—and fitted with a lurid backstory.

The motif of a haunted object objecting in the strongest possible terms to being removed from its home is one we frequently see in stories of screaming skulls.  (It runs in my mind that there is even a relic of an English saint that screams or otherwise raises a fuss if it is taken from its regular place, but the name escapes me.)

In a less fraught example, the Priory Bay Hotel on the Isle of Wight is said to be haunted by a young girl in a blue dress, whose portrait hangs in the hotel, showing her with her pet King Charles spaniel at her feet. A stuffed King Charles spaniel was kept for decades in a glass case on the stairs of the building. When the object was sold, the girl’s ghost was seen and heard sobbing and calling for her dog. The dog was bought back and replaced on the stairs; the ghostly disturbances ceased. But if the case is removed from its designated place, strange noises and the voice of the child calling for the dog will be heard. [See Gay Baldwin’s books and videos on the Ghosts of the Island of Wight for more details.]

Who knew that inanimate objects could be so territorial? Do the curators of paranormal museums have to separate squabbling artifacts?

I want to know if the effigy actually existed and, if so, where it is now. If you know, contact chriswoodyard8 AT gmail.com, who is also so realistic as to be quite horrible.