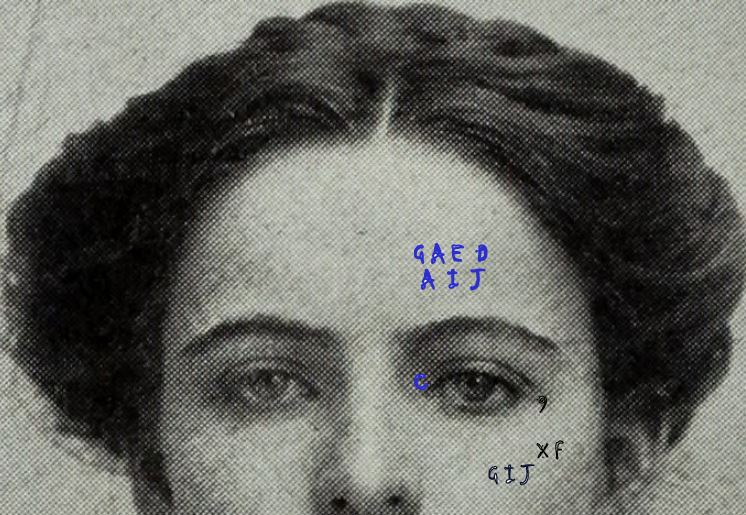 Dermographia on Face and Knee My interpretation of Mrs. Marcil’s skin-writing. (Not Mrs. Marcil)

It has been some time since we wrote about dermatographia/dermographia/stigmata/skin writing. Today we peer into the face of Mrs. Marcil of St. Jean Baptiste, Manitoba, Canada and onto the—well, knee, among other places—of a French schoolgirl. Stigmata–replications of the wounds of Christ’s Passion—has been an almost exclusively Roman Catholic phenomenon. Could the same be said about secular stigmata like the numbers and letters on Mrs. Marcil’s skin and the pictures and prophecies on that of the schoolgirl?

How a Manitoba Lady’s Face Was Marked.

Mrs. Marcil, of St. Jean Baptiste, is reported to have her face marked with mysterious figures and letters. A reporter of the West Lynne Times visited her, and gives the following account of the interview:

“One week from last Thursday, it is claimed, the first appearance was noticed on the left check of the face, and since that time it has appeared and disappeared continuously, always in the same place. The letters and figures the first few days were of a brown color, but later they have become of a bluish hue. The following figues and letters, as taken down on paper by a party present and shown to the reporter, are said to have appeared on Monday afternoon, viz: 1, G, A, E, D, A, I J, A, E, C, 9, X and F.

Mrs. Marcil is of a prepossessing appearance, rather below the medium height, and not adverse ot the visitors who have called upon her lately to become eye-witnesses of the remarkable occurrence; she seems to be entirely unconcerned herself as to the appearance or disappearance of the phenomena on her face and conversed with the reporter and A. Coblentz, of Morris, who was present at the time, quite freely on the subject, stating that before she went to bed the previous evening she looked at the mirror and the figures 1, 8 and 1 could be distinctly seen. At the request of the reporter, and the evening drawing to a close, she drew her chair to the window, and, exposing her face to the light, in a short time both visitors were astonished at the result, for, the reporter adds, “we must confess that previous to this our credulity did not make us easy of belief, but there on the left cheek on Mrs. Marcil’s face, although not so colored as we have been led to believe, the letter E was stamped plainly to be seen. The letter resembled to us more the appearance in coloring of a smart slap having been given on the face. This disappeared, to be replaced in a short time by the figure 4, and almost immediately by the letter R, it being closely joined to the figure 4 in the shape of a monogram. Satisfied with what we had seen we took our departure, totally unable in any way to account for the appearance, and wondering in our minds if it had any relation to old Mother Shipton’s Prophecy.”

Here is a circumstance for some scientific men to investigate. Cincinnati [OH] Enquirer 16 April 1881: p. 12

This next story does suggest a certain amount of sleight-of-hand, as well as a case of the girl improving on her results as her audience grew.

Girl Answers Questions by Marks Which Appear on Body.

Paris, Dec. 8. Replying to various questions by means of pictures and messages in written characters appearing on her skin is the amazing faculty which has been developed by a 12-year-old schoolgirl residing in the village of Bussus-Bussuel, near Abbeville. Medical men and other scientists throughout France are interesting themselves in the case and all of them so far have confessed themselves puzzled to account for the girl’s strange power.

The inexplicable phenomena, which first manifested themselves during the past summer, have since been repeated with constantly increased distinctness. The first of the series of pictures was a ladder which was vividly outlined on the girl’s arm. Then followed the representations of a tree, a dog, and, after intervals of several days, a horse and other animals.

These were followed by messages referring to different inhabitants of the village, such as “Fedora will not come this morning,” “Victor is sure to be taken for a recruit,” and many similar statements, imprinted, some of the girl’s arms, others on her chest, her shoulders, or her legs and thighs.

This strange faculty, as though not sufficiently mysterious in itself, was later on followed by the even more astounding one of divination. An instance of the possession of this gift, attested by numerous intelligent witnesses, is furnished by a newspaper representative.

The visitor asked the girl if she could tell his Christian name. After a quarter of an hour’s silence the girl exclaimed—“Yes, here it is!”

Exposing her leg, there were seen, just above the knee-joint, a number of minute markings. These quickly took shape, and in the space of a few seconds there appeared, in well formed letters, the name “Henri.” This inscription, before it had time to fade away, as they all do after a short space, was duly photographed.

Physicians who have examined the girl pronounce her a perfectly normal child, showing no trace of neurasthenia or of abnormal development. St. Alban’s [VT] Vermont 11 December 1913: p. 10

Hysteria, of course, was the normal diagnosis in cases of this sort and the girl was about the right age for poltergeist manifestations AKA hysteria. It is interesting that none of the three instances of “divination” is positively verified by the report. The ladder and tree images hint at shingles, which creates rashes along nerves, but shingles doesn’t usually appear on the arms. Does the fact that the inexplicable phenomena first appeared in summer suggest chiggers? Or do we rule out both because no itching or blisters was described?

Well, we can rule out all of the above. As might have been predicted…

Marks on Girls’ Skin Were Made By Child Herself.

The “miracle writing” which appears on the skin of the 12-year-old French girl, Raymonde Bellard, is exploded. Specialists found that it is a case of demography, which has been known for centuries.

The skins of some people and even of animals is sometimes so extremely sensitive that the lightest friction will produce weals.

It now appears that the designs and words that appeared on the arms, face and body of little Raymonde were at first unconsciously drawn by herself. Later, however, when crowds of curious people began to come to see the “miracle girl,” she, alas! practiced a deception upon them.

She drew the marks herself with a hairpin! It was the fact that the marks appeared only on the left side of the girl’s body which first caused suspicion, and so the “wonder” is reduced to the realm of science and deception. Montgomery [AL] Advertiser 7 December 1913: p. 40

As for Mrs. Marcil, I confess that I am an inveterate searcher-out of patterns, but I think I would drive myself mad trying to solve the cyphers on this lady’s face.  One does note that they always appear on the left-hand side… If there are any code-breakers among my readers, do you see any significant patterns?  Concentrate very hard and perhaps the answers will appear on your skin. If not, a hairpin may help. Chriswoodyard8@gmail.com.

Loes has written in with this absolutely riveting read:

Reading your post about the woman with letters on her skin I thought you might like the story of the Leavenworth prisoner Hadad, if you don’t know it already. It’s a great, and in many ways a very mysterious story.
http://www.searchwithin.org/download/magician_of_leavenworth.pdf
Thanks, Loes!