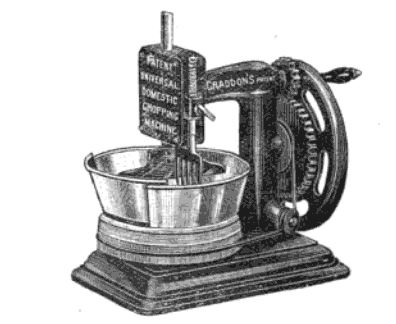 We have been neglecting our list of Interesting People of late. Allow me to introduce, in a very limited sense, Mrs. Ellen Graddon, the inventor of the device above. I have no biography, no portrait, no gravesite photograph–only the details below. I cannot tell whether the ingenious Mrs. Graddon truly believed that she was aided by the spirit of her late husband or if that was a polite fiction to uphold the society-preserving illusion that women have no mechanical aptitude and should leave inventing to the men.

“Julia,” [editor W.T. Stead’s spirit guide, the late journalist Julia Amis.] in her latest communication, warns us that evil as well as good would result if the living could draw at will upon the knowledge of the disembodied. It is even possible that the living might feel seriously embarrassed by the competition of the dead. Here, for instance, is Mrs. Graddon, who has been and gone and patented a chopping machine as her own original invention, whereas in reality she avers it was the invention of her departed husband! The invention is ingenious and handy, although it is a trifle tall to describe it as “the greatest novelty of the Victorian Era.” It consists of a chopping-block which is rotated upon a stand by means of the hand-wheel. From a pulley fixed on the shaft of the hand-wheel an endless band is driven, which passes downwards over two guide pulleys and encircles the chopping-block. From the standard that carries the hand-wheel there projects an arm, in the head of which the shaft or handle of the chopper is made to move up and down vertically by means of the spur-wheel and pinion, this gear being driven by the hand-wheel. This gives the chopping action to the blade. In connection with the fixed head is a sliding fork or rake for gradually separating and moving the material to the chopper, and to turn it over to ensure thorough reduction. The rake can be affixed in such a manner that it will yield to hard material, or large pieces put into the bowl, or if the bowl be overcharged from negligence of the attendant. The block is surrounded by a screen, which is slipped over the edge of the block.

If in a household of eight persons, it will save five shillings a week, it makes a good return on the purchase money, as it only costs a guinea. The odd thing about it is that the description of the machine, Mrs. Graddon declares, was given her by her husband after his death. He is a mechanic, she is not. Here is her story of how the machine was invented.

MRS GRADDON AND HER PATENTS.

Mrs. Graddon is one of those mediums who make practical use of their mediumship. She is a widow, and she claims that her husband, who was an inventor, has given her, since his death, designs of machines which she has patented. She tells the story as follows in Light, January 9th, 1897:

On the morning of April 20th, 1896, before I was a Spiritualist, about a fortnight after the death of my husband, who was himself an inventor and keenly interested in all mechanical appliances, I was standing in the breakfast-room discussing with my children and the servant the question of dinner, with a view to which I had been chopping up some veal. Suddenly I was conscious of a very curious sensation. Hardly knowing what I did, I called excitedly for a pencil and paper, which were brought. Then I sat down, and my hand was made to draw a diagram of what I afterwards saw was a chopping machine.

After long consideration, and acting on the advice of friends, I decided that the idea indicated by the diagram was a practicable one, and proceeded to patent it and have a model manufactured.

Then I got a City firm to take the matter up, and entered into an agreement with them, under which they paid me £50 down and undertook to take out the foreign patents and put the machine on the market. Unfortunately, within three months afterwards they went into liquidation. Now that contingency had been provided for in the agreement, under which, in such an event, the sole interest in the invention reverted to me. But when I took steps to enforce this, I found it would cost me £300 to pay off the commitments into which the firm had entered with foreign patent agents and others before I could regain control of my patent. Try as I would, I could not raise the money, and eventually the patent lapsed.

In the meantime, however, I had come into contact with some Spiritualists, and had begun to investigate for myself, with the result that I rapidly developed as a medium. I then discovered what I had previously suspected to be the case, namely, that the idea of the chopping machine had been given to me by my husband ; for I should tell you that when he was dying he had promised me, at my earnest entreaty, that if it were possible for him to come back to me from the world of spirits he would do so. This was the method he had adopted to provide for his widow and children; but it seemed then that his effort had been in vain.

In the meantime, however, other means were provided for our maintenance, and I was told that when the proper time came he would communicate to me the design of another machine of the same kind as the first, but of a more perfect character. I received that design last April on the same date (the 20th), and at about the same hour, that I had received the first invention ten years before [See below. This is patently wrong.] Instead of writing the letter, my hand at once began to rapidly outline the design of a machine, and I saw the long-expected invention had come at last. These are not the only inventions I have. received by automatic drawing. Borderland: A Quarterly Review and Index, Vol. 4, edited by William Thomas Stead, 1897

A correspondent signing himself “J.M.” reported in a Spiritualist publication that he consulted Mrs. Graddon about a missing “official book of which I had charge.” “I wrote my questions on scraps of paper, which I placed in her hand so that she could not see what was written thereon.” She correctly identified the unlikely place where the correspondent found the book. Other than that story and the Borderland article, she does not seem to appear in the Spiritualist press. When she wasn’t inventing appliances, Mrs. Graddon advertised that she gave private sittings for 5s. Life insurance would have seemed to have been a more prudent idea than channelled invention inspiration if her husband had wanted to provide for his widow and children.

Here is her original chopper patent. Her application was dated 20 April 1896, which is the date that she gives above for her “eureka” moment. This is the improved chopper patent, application dated 4 May 1897, definitely not 10 years after the first inspiration, unless there’s a misprint in the article. She also patented a device for cooking fish in March of 1898 that looks like it belongs on a TV infomercial. Her husband is not named on any of the patents–I assume there are prohibitions against post-mortem patents. What was Mr. Graddon’s name and what did he invent?  Write your answer on a scrap of paper and place it in the hand of Chriswoodyard8 AT gmail.com.