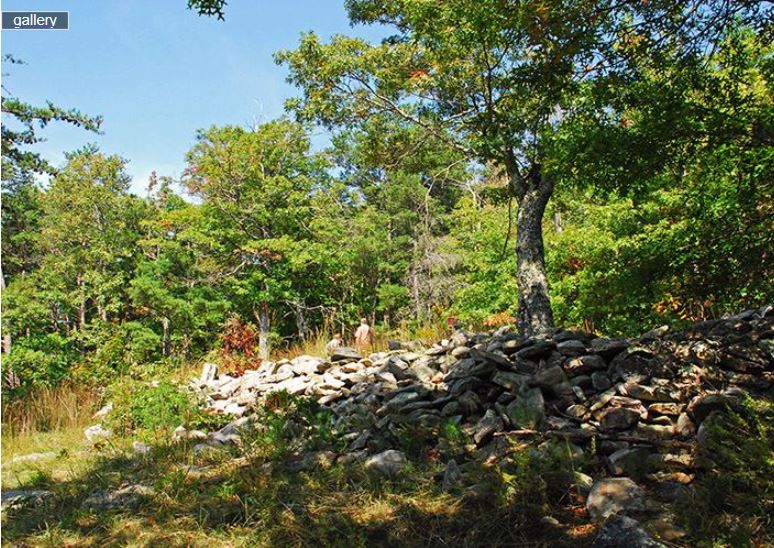 19 July 1799 was the date on Michel Ange Lancret’s report on the Rosetta Stone, uncovered a few days earlier by Napoleonic troops.  In my little world that date is as good an excuse as any for a post on another stone inscribed with mysterious hieroglyphics—from Georgia.

I visited Fort Mountain ages ago and was told that archaeologists had been frustrated by virtually sterile ground, with no artifacts to point to occupation by Native Americans, Hernando De Soto, or Prince Madoc, to name a few of the site’s putative builders.

The author of this article on Fort Mountain starts off with a rather amusing statement about historical attribution, arguing that if anything unusual in the way of a road or fortification is found in Ohio, it will be ascribed to Mad Anthony Wayne and

“so it is in Georgia with De Soto. No one knows where he marched; where he fougth; where he met savage ambassadors. But he went somewhere through Georgia, and so there are fields and caves and valleys and mountains connected by legend or fancy with his name. Small wonder then that Fort Mountain, which bears upon its summit a curiously remarkable prehistoric stone fortification, should be deemed one of the places where he paused on his way to the Mississippi.”

I’ve glanced at various arguments about the Welsh, the moon-eyed peoples, Mound Builders, and the Spanish. I do not have an opinion as to the origin of Fort Mountain and am loathe to be drawn into the controversy. I like a quiet life. But I as far as I could see from my admittedly cursory survey of the literature, rocks carved with mysterious hieroglyphics are not mentioned. If I have missed them, just ignore this post. If not, these petroglyphs deserve to be entered into the record.

That this is a Mound-builders’ country does not rest alone on the fact of the existence of the stone fort. There are a number of mounds in northern Georgia, and General Sherman, when in this part of the country as a lieutenant, some twenty years before his Atlanta campaign, made a special visit to the even then famous Hightower group on the Etowah River. On Kelley’s (once known as Cunningham’s) Island, in Lake Eric, is a large rock, curiously marked with hieroglyphics of the Mound-builders, and at the little village of Independence, near Cleveland, is another. Here in the south we were for a time in hopes of finding a stone equally curious with those two of the north, for we heard of a stone covered with strange letters—characters which the erudition of the mountains could not translate. The accounts were so explicit that we could not but believe that a marked stone had actually been discovered, and we searched long and earnestly over the mountain top. But we could not find it. Then we tried to find some one who himself had seen it, and this was unexpectedly difficult. Those who heard of it could but describe it from hear-say, and then refer us to one or another who, so they thought, had most likely seen it, and in our quest we traveled miles of distance and traversed hills and valleys. At length, when on the point of deciding that the entire story was a myth, we were told of a man who, our new informant said, had actually found the stone. He was six miles away, but we at once sought him out. An honest sort of man he seemed, and one quite willing to tell all that he knew. Yes, he had found the stone of which people talked so much. He had come across it some fourteen years ago. He had noticed a flat stone, about the size of a table-top, lying by the fort entrance, and had from some impulse turned it over There, on the lower side, were the characters. “Were they cut in the stone?” No, they were not cut. They were painted on with red paint. “Was the flat stone lying over another stone, or were the letters right against the ground?” They were right against the ground. “An’ they must hev ben thar ever sens the fort war a-built on the mounting!” The letters are no longer to be found. How long they existed, with the paint against the damp earth, is a problem of easy solution. We have explained this at some length, so that other visitors to the mountain who may hear similar stories of the mysterious stone, may know somewhat of their foundation and origin.

Since talking with that discoverer we have been told of some other mountaineer, name unknown, who one day clambered perilously to some cave, by such a dangerous route that “a million dollars” would not tempt him to try it again, and who found by the cave-mouth a strangely marked stone, with “about a thousand” strange characters upon it, in “either Latin or Greek,” This man, and his cave, and his thousand letters, we have not endeavored to find.

They are an interesting and curious people who now inhabit the mountains and the mountain valleys, and they are destined to become as extinct as the very Indians and Mound-builders. Here, still, is the primitive wilderness, the pioneer backwoods; where men go into the forest for fuel and for much of their food; where women knit and spin, and with their own hands make the family linen and stockings; where the rifle and pistol is always carried; where there is splendid physical beauty and development of both men and women, and where clear, bright, fearless eyes calmly meet your own…

One afternoon, far up on one of the mountain slopes, we watched the glorious sunset, and as the shadows deepened in the valleys, and the splendid light still touched the mountaintop with shining glory, we thought of the vanished Mound builders-— sun-worshipers as they in all probability were—and of what, on that very mountain summit, must have been their thoughts and their emotions and their wildly solemn rites, many and many a time as the sun was setting even as we then saw it decline. And then we went down into the darkened valleys, and all about us was sombre gloom. We looked back again at the mountain-top. It was still bright. It was luminous with light. But even as we looked the light grew fainter and fainter, and soon the mountain summit was wrapped in a gloom as impenetrable as is the history of the strange people who once dwelt there.

What do we make of this table-top-sized stone with characters in red paint? (Was that Native American red ochre preserved by lying face down in the earth? The pigment has been found in mounds.) Is this painted stone one and same with the “marked stone” or the one carved with “Latin or Greek?”  Was there ever a stone carved with mysterious hieroglyphics or is this just a petroglyphic FOAF tale? If one of the “interesting and curious people” was attempting a hoax, not much effort was put into it. The least they could have done was to fruitlessly send the stone to the Smithsonian Institution.  If the slab existed, it seems an anomaly in an area otherwise barren of artifacts.

Incidentally, I’ve visited the Leo Petroglyphs in Ohio and know of the Kelley’s Island rocks, but have drawn a blank with the carved rocks in the Independence, Ohio area mentioned by the author. Robert Shackleton, Jr., seems to have been a writer specializing in travel, history, and antiques.

Thoughts on mystery petroglyphs in Georgia or Ohio?  Yes, I know about The Georgia Guidestones and Track Rock, thanks.  chriswoodyard8 AT gmail.com