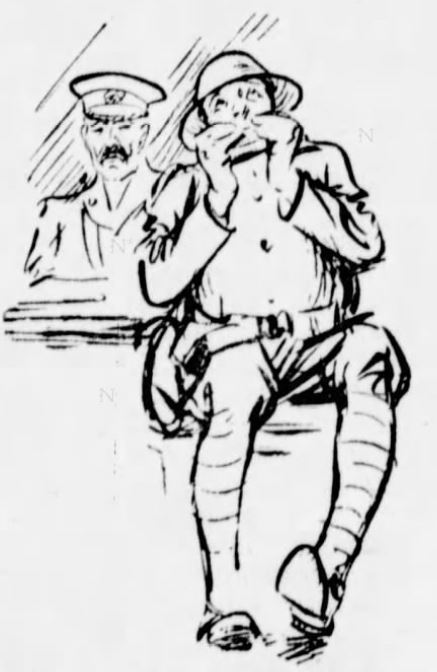 The Worst Soldier in the British Army

Tomorrow is Veteran’s Day, Remembrance Day, and Armistice Day, marking the end of the Great War at the “eleventh hour of the eleventh day of the eleventh month” of 1918. It honors the service of those who survived, rather than the dead, so here is a strange story of war that comes from a newspaper article titled “Stories Transcending Fiction that Our Soldiers Tell in France,” by Clair Kenamore, who wrote Stories of the Thirty-Fifth Division, The Story of the 139th Infantry, and From Vauquois Hill to Exermont. Not, perhaps your usual newspaper hack.

Again to the British Colonel, and, after a little pause, he said:

“I myself saw a thing which, were I to tell it, would brand me as a romancer, but it was calmly, dispassionately true.”

“Carry on,” said the whimsical Frenchman, “I shall at least try to believe it.”

“When we came out we had a regimental clerk named Tommy Brown,” the Colonel said, “and he was at once the worst soldier and the most popular man about headquarters. He was a little, round chap, with a round face and round eyes, and usually forgot to salute, and he never had all his pockets buttoned at once. He wrote a round, clear hand, and all the loops of his letters, o’s and a’s and d’s and such like, were made with perfect circles. He did his own work and then cheerfully turned to and did anybody else’s that he could. He would drive an ammunition cart half the night and bear stretcher the other half, work at his own job through the morning, and at mess time play away on a harmonica in a way to drive the old man crazy.

“Well, we were pretty well beaten to pieces below Ypres in the summer of 1915, and Tommy was knocked out and rated as missing. Some said he was killed, others thought he was captured, but we never saw him again. We used to talk of him on gloomy nights, just to cheer ourselves up, and then, gradually, we forgot him.

“Last winter I was walking through our lines on a particularly atrocious night, when Fritz got peeved about something, and the Major and I and three or four others got into the Major’s dugout to wait until it was over. Fritz was shelling the whole back line, and it was pretty fairly rocking. You can, in a way, watch the working of the German mind in one of these outbursts of hate, and it seemed to me that he was searching for a headquarters dugout.

“Our door was blown in once, but nothing nearer happened until just as he was about to cease firing, he got a direct hit on our dugout. The shell smashed through the flimsy concrete and imbedded itself in the floor, but it did not explode.

“’Thank God, it’s a dud,’ everybody said, but a gas officer yelled ‘Gas!’ and slammed on his mask. We all did likewise and he hurried dug out the shell and dumped it into a gas-tight bag. Fritz had been throwing a good many liquid gas shells. The kind that empties out the liquid from the rest in the nose of the shell, leaving the liquid on the ground to produce gas for hours.

“The gas officer bore the shell away with him, and as the strafe ceased we went back to my headquarters. About an hour later as the Adjutant and I were having a drop of hot rum before turning in, somebody came barging through my sentries and burst into my quarters. It was the gas officer, and I thought he was blotto. He did not cut a bit too deeply into the whisky at times. But when he refused a drink I knew he was sober.

“’Tommy Brown did it,’ he said, hysterically and half weeping.

“We tried to sooth him and untangle his mind.

“’That was not a gas shell,’ he went on. ‘I took it back and opened it up. It was high explosive, or should have been, but the explosive was harmless. Somebody had pulled the teeth of the thing before ever it left the shop. And I know who it was too. It was a prisoner working in a German munition factory, a chap who is carrying on, well knowing that he will be shot the minute he is detected. In that shell, where the fuse should have been, was this scrap of paper.

“He spread out the paper, and there, in Tommy Brown’s fat, round characters, were the words: ‘I am doing my bit.’

“Of course, Tommy could never have known where we were, and he could never have known, out of the millions the Hun was sending across, where the shell he worked on himself would fall, but we knew that night, luck, fate, chance, the long arm of coincidence or what not, told us that our liaison was unbroken and that the old regiment was carrying on.”