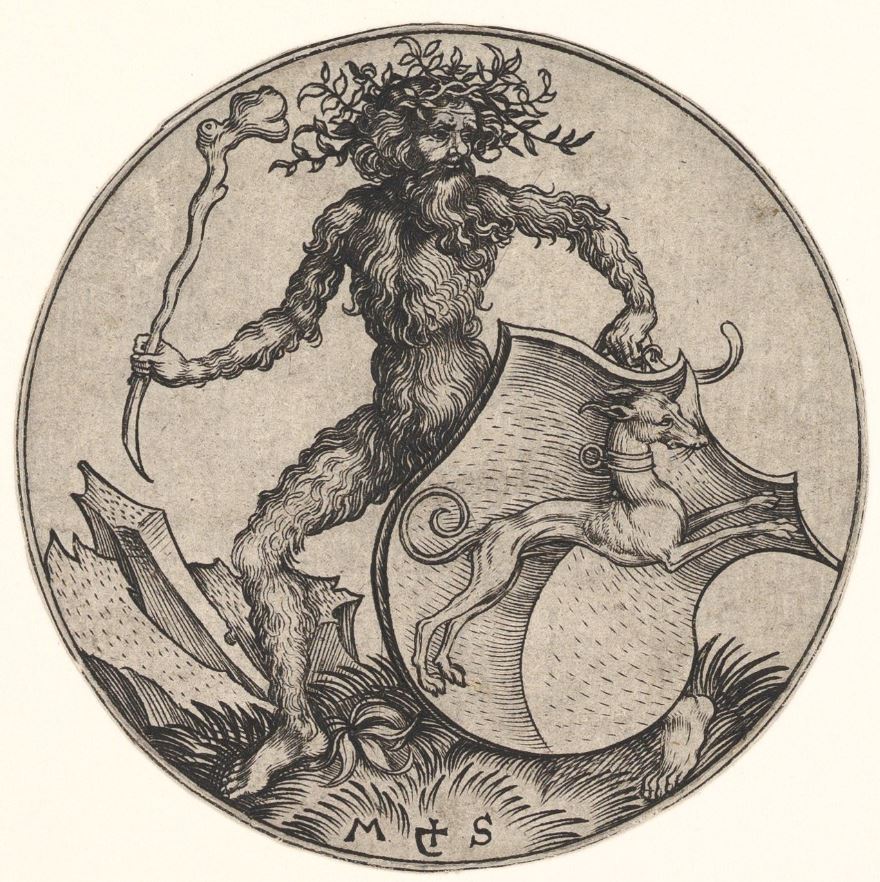 Nineteenth-century Spiritualists seemed intrigued by the idea of “Primordial Man.” Some liked to cite primitive civilizations as pure and untainted by such things as corsets, processed foods, or parliamentarian debate. Others—and they were the majority—looked to the men of the past as a salutary example of how far mankind had advanced and evolved.  Spiritualism itself believed in the evolution of the spirit in the afterlife, where, if all went well, it would progress from a state of wickedness, blindness, stubbornness, or ignorance to more exalted spheres of the moral and spiritual realms.

Today we visit North Wales with a lady Spiritualist narrator, who tells of her meeting with the primitive and unenlightened spirits of furry wild-men of old.

ANCIENT SPIRITS ON THE WELSH HILLS.

Of a truth the air is filled with strange sights and sounds and those who, on special occasions, see and hear more than is sensed by the ordinary matter-of-fact mind may be thankful for a strong body-guard of experienced and intelligent spirits who protect them from exercising their mediumistic faculties too freely.

I have often wondered at the unreasonable views of people who expect a sensitive to pass into the clairvoyant state on any or every occasion. For my own part, there are many times when I cannot see through the veil, or behold anything but our own sphere and its inhabitants.

Feeling greatly in need of a holiday, I, in company with friends, journeyed to North Wales, where amid woods and hills, and partly surrounded by the refreshing sea, I found a restful calm and easeful mind.

Whilst quietly gazing upon the picturesque scenery, thoughts of the Sunday-school Heaven would steal upon me, and I pitied those who were always looking forward to its glories, utterly forgetful of the beautiful world around, which needs only an unfoldment of the harmony within us to render it a place of surpassing loveliness and joy.

One Sunday evening my friends and I prepared for a long ramble on the hills. The day had been unusually warm, but towards its close became delightfully cool and inviting.

After a long ramble, I felt much fatigued, but kept the matter to myself, fearing to become a hindrance to the others.

A faintness then came over me, struggle as I would, and I was just about to make known the exhaustion I suffered, when suddenly I commenced to shiver, as if from strange influences. This lasted but a moment, and there at my side was my guide, ‘Rupert,’ and with him a spirit whom we call ‘Ariel.’ After this, walking became easy and pleasant. The change in my deportment was so marked that my companions at once concluded that help had been given me. We reached our hotel at last, and after a slight repast I retired to rest.

I must have slept a deep sleep of two or three hours’ duration, when I was quickly and quietly awakened. It seemed as though a gentle hand had been placed upon my forehead to arouse me. I rubbed my eyes and looked about the room, and although I had put out my light upon retiring, yet the room was lit up with a strange, soft light, sufficient for me to see who was present. I must confess that my first feeling was one of fear, for the beings who were walking at the opposite side of my chamber were the strangest creatures I had ever beheld.

It instantly flashed upon my mind that these midnight intruders were of the ‘missing link’ race, which had been so vainly sought by anthropologists. They appeared too large in stature for a species of ape, and yet they were covered with a skin that was brown and hairy.

When I perceived these wild and uncanny creatures in such close proximity, I own to a quake or two. But then I saw, standing on either side of me, ‘Rupert ’ and ‘Ariel,’ and I heard a whisper that if I were not braver I should never be able to learn anything concerning the strange variety of the human family before me. I heard ‘Rupert ’ assuring me that I was perfectly safe. A test of the truth of his words was immediately forthcoming. One of the forbidding-looking spirits approaching a little too close to me, ‘Rupert ’ raised his hand, and the former bowed low and seemed to fully understand that he was not to stand so near to me. My guide then said, ‘These creatures have followed you from the hills. They lived there hundreds of years ago, before the country reached an appreciable measure of the civilisation she at present enjoys, and, passing into the spirit state, have but little advanced, and are not much altered from the condition they were in while encased in a physical form.’ ‘Rupert,’ continuing, remarked that ‘Some of them inhabit the wilder part of the hills at this time. They do no harm to more enlightened beings, by whom ultimately they will be assisted to advance in spiritual things.’

He also told me that when I experienced the strange sensations whilst walking on the hills, it arose from the influence of the untutored children of Nature, who were attracted, and gathered around me. He said that they were curious to learn something concerning me. I was assured that they were kept at a distance simply to prevent their magnetism proving inconvenient to me. They were told, however, to follow us, as ‘Ariel’ said she would talk to them and endeavour to make them understand higher things. She apparently succeeded in making them comprehend that she desired them to move about where I could see them when awakened.

I looked at them now without fear. In personal appearance they were fine and powerful beings. Their faces were brown and hairy, and their eyebrows shaggy. Their eyes had a bright and serious look about them. Their bodies were clothed with a hairy material which looked like the skin of animals, and fitted their forms so completely as to raise the doubt whether it was their own natural skin or an artificial covering. Their hair was arranged, or grew, in a kind of top- knot; it appeared to grow up instead of downwards, and was matted together.

I was wondering how this was, when ‘ Ariel,’ reading my thoughts, said in her quaint and characteristic manner: ‘They gets juice from nuts and mixes in their hands with clay; then they puts it in their hair, makes it stiff, and sticks it up so,’ using her hands at the same time to show me how it was done. ‘Ariel,’ continuing, said: ‘I see them years and years back, killing the animals for their food, eating nuts, and climbing from hill to hill and mountain to mountain, and using their toes better than their hands.’

By this time the uncouth spirits in my chamber were talking earnestly to each other. It sounded to me like jabbering; but ‘Ariel’ seemed to know what they said, and interpreted their language for me. They called ‘Rupert ’ the great white spirit, and wished to serve him. The spirits now commenced to manifest uneasiness, as the first rays of the morning light stole into the apartment. I saw ‘Rupert ’ raise his hand, and the children of the hills advanced towards him as if to ask his commands. They bent low while waiting his pleasure, and, after a moment, my guide smiled his adieu, and they, as if understanding that they were dismissed, gave a sort of whoop and happy laugh, and disappeared.

I was too surprised to sleep again for a long time, and as I pondered upon the singular occurrence of the night, it struck me as a point worthy of note, how little one’s imagination has to do with clairvoyance. For the only forms I had in my thoughts in connection with the hills and woods were those of legendary fairies and spirits, who, of course, are in strong contrast to those I actually saw.

I confess that I have a low tolerance for adorable spirit guide names; “Ariel” and “Rupert,” made me wince a little. The lady seems both patently sincere and also subject to “strange influences,” which might mean waking dreams, hallucinations, trance- or hypnopompic states, or seizures; in short she seems to have been what is often called an “experiencer” or a “fantasy-prone individual.” She had obviously expected to see a better, daintier class of fairies and took this as confirmation of her clairvoyance.

There is an unpleasant whiff of Imperialism in the “uncouth,” the “untutored” children of nature with their shaggy brown skins and their desire to serve Rupert, “The Great White Spirit.” That said, was the narrator’s vision some sort of ancestral memory of wild men or woodwose, whose legends persist even today? Nick Redfern has written extensively on the British Bigfoot and the Man-Monkey. I found this piece about a North Wales wildman on his Man-Beast U.K. blog. Dr. Karl Shuker also has a thorough analysis (with some great images) of the woodwose legend in this post.

In an aside, probably not at all relevant to our narrator’s vision, the United States newspapers of the 1870s and 1880s were full of stories of wild men living rough in the woods, terrifying women and children, and giving rise to posses that never seemed to capture them. I’ve speculated that some of these wild men were Civil War veterans suffering from mental illness or PTSD. Was there a similar class of feral Crimean or Napoleonic veterans roving throughout the British Isles?

Also, who was Marie Haughton, the narrator? Was she a professional medium/clairvoyant? Her visitors suggest the “ape-man” said to have been repeatedly materialized by the Polish medium Franek Kluski and which also appeared to Sir Oliver Lodge and his wife in sittings with Jean Guzik.

Given the circumstances of Haughton’s vision, it probably cannot be considered any more than a vivid dream. Yet one detail struck me as decidedly odd: the creatures’ hair matted with nut oil and clay. It sounded strangely like the “hair gel,” discovered on the pompadour of a bog body.