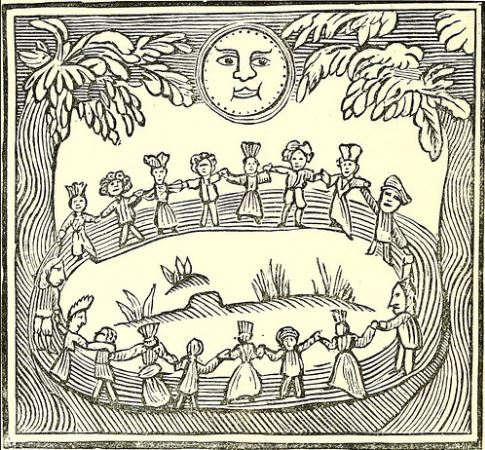 Curious Little People Fairies dancing in a ring from “Chapbooks of the Eighteenth Century,” 1882

A busy day, so a short note about the Fae and the Dead. The links between the human dead, the Gentry, and the Afterlife are many and various. Some believed the dead to have been taken by the Good People, existing in a kind of Purgatory between life and death. It was said that the dead could be snatched back by determined loved ones, but when push came to sidhe, said loved ones forgot the magic words or were unable to move. Snatching back worked better in theory than in practice. The dead could, at times, flit back into view as a White Lady or as an armored warrior marching out of a rath, but at such times they appeared as full-sized humans, which makes the following story all the stranger.

Among my notes, I find mention of a little house near this same village of N——e, which was reputed to be haunted. The note says: “Mr. Z. (an old gentleman well versed in the antiquities and folk-lore of his district) told me about a haunted house called Tyhir…. About twenty years ago, the man who lived there used to see curious, little people, of the size that could run under a chair, walking about the house. This man was so nervous of what he heard and saw that he would never, if he could help it, stay alone in the house. Mr. Z. spoke once to another man, who had often gone to keep the other company on Sundays, when he was afraid to sit in the house by himself. This second man told Mr. Z. that though he himself had seen nothing, yet he had heard noises which were quite unaccountable. The ‘little people’ seen were said to exactly resemble in feature the former dwellers in the house; a little old man called ‘Tom Tyhir,’ and his wife.”

Those damned discreet dashes and circumspect initials make life so difficult for the fortean researcher…. But a few pages earlier, Lewes talks about the ghosts of Pembrokeshire, so it is possible that the village is Newgale. It is supposed to be close to a stately home called Wernafon, which I’ve been unable to locate. There are records of an historic house called Tyhir. If “twenty years ago” means the 1890s, the family living there was named Evans. The surname Tyhir does not appear in this admirably detailed list of Tyhir’s inhabitants. As for Mr. Z., Miss Lewes seems to be toying with us. There is no letter “Z” in the Welsh alphabet….

That said, what can we make of ghosts who creep about beneath chairs like mice? Are they dead people or the Good People? Certainly there is the theory that the majestic Tuatha Dé Danann withered to leprechauns and tiny fairies: the “Little People.”  But I have been racking my brains to think of another case where the “little people” are the recognized dead in miniature.

Other examples of the tiny dead as ghost or fairy? chriswoodyard8 AT gmail.com