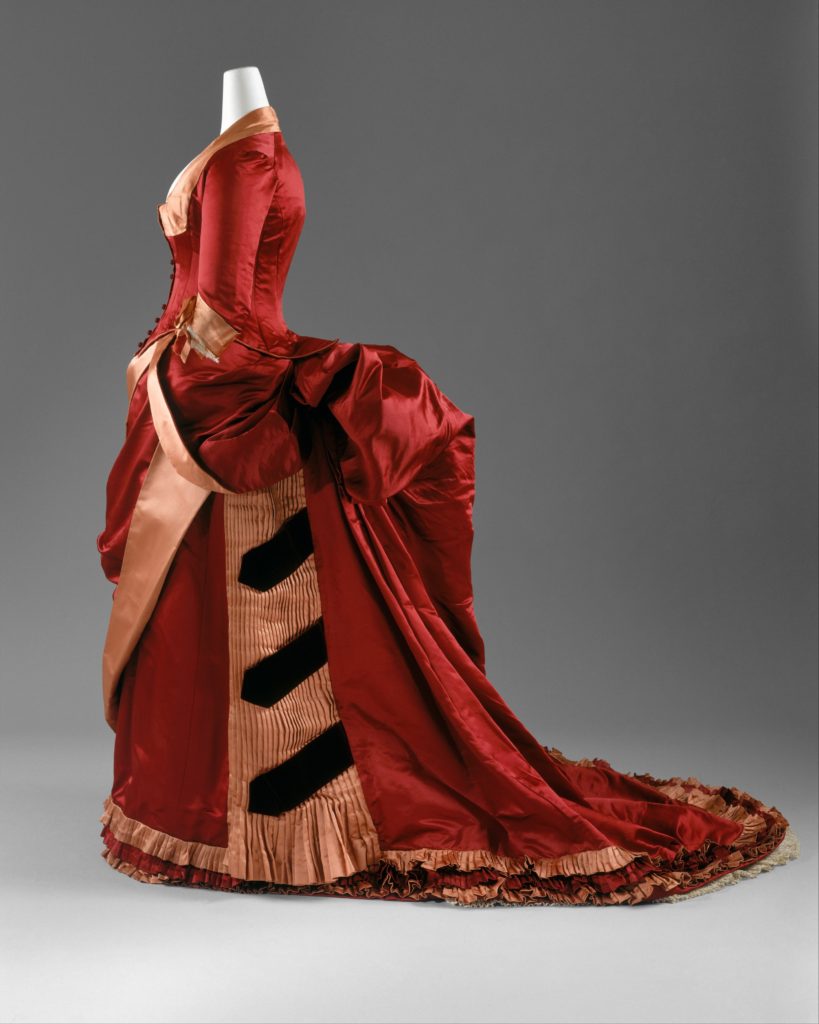 Things have been so grim and grewsome (as the 19th-century papers put it) at the Killer Budgie blog recently, the result, no doubt, of reading too many articles about raving maniacs sent to asylums and plague in 1870s Russia. Let us lighten the mood with a little costume humor. The target for today is the bustle. Like most fashions, they were ridiculed, caricatured, and exaggerated. Here are several examples of bustle humor. A bum-roll, please….

Jokes were made about ladies carrying their shopping in or on their shelf-like bustles. And all sorts of materials were used to stuff the appendages including wool, rags, and wood shavings. Or religious publications:

A lady was passing along Thirteenth Street, Philadelphia the other day, when suddenly her face took on an ashen hue. She looked four ways at once, quickly decided not to scream or faint, and then, with great presence of mind, began to work very hard. She had become uncomfortably warm and passers might have seen a thin wreath of thin smoke curing beneath the folds of her dress. She turned back toward a large window and made a grab for the smoke. First she brought out a purse, and then came a package of dry goods, a box of candy, a pair of baby sock, a Seaside novel, half a dozen papers of hairpins, a pamphlet on dress reform, and last of all the flaming and incinerated remains of a discreet religious Philadelphia weekly newspaper that had just been doing duty as a bustle. By this time quite a crowd had gathered and helped stamp out the fire on the sidewalk. But meantime the fire had caught the embroidered garments, and she was in great danger of being very severely burned. However a pitcher of ice water subdued the conflagration and the lady, more mortified than injured, replenished her wardrobe from a neighboring store.  Plain Dealer [Cleveland, OH] 29 August 29 1886: p. 4

The elderly were often shocked by the young with their frivolous new fashions–sometimes for the wrong reasons:

Incident: A fashionable young lady recently met her plain old grandmother at the Springs. The old lady’s heart was filled with innocence and simplicity, and her ideas of fashion never went beyond a straight coat and plain cap. When, therefore, she met her dear grandchild, the first time for many years, and saw her, a disfigured invalid, she was shocked and almost fainted. When her emotion had a little subsided, she turned with tears in her eyes, and said, “Margaret, honey, thee may get well; but indeed I fear the waters will never cure thee of this dreadful thing, (laying her hand on Margaret’s fashionable bustle.) O! how awful thee must feel about it.” The Star and Banner, [Gettysburg, PA] 16 June 1848: p. 1

The classic bustle, as illustrated above, actually had a comparatively short vogue in the 1880s, but ladies had been improving their bottoms for centuries with devices like “bum-rolls” and “bum-improvers” made of materials such as cork. The polite word for a bustle was “tournure.”

This from a book published in 1840: “The folds of her embroidered satin gown were sustained by an ultra-fashionable hump (tournure, par courtoisie).” There are 1840s images of Queen Victoria in profile with a suspicious, but graceful bulge at her back.

Lady Randolph Churchhill, the lovely American-born Jennie Jerome, wrote of a bustle prank she played in 1887, the year of Queen Victoria’s Golden Jubilee:

Everything that year was dubbed “Jubilee,” from knights and babies to hats and coats. “God save the Queen” was heard ad nauseam, on every conceivable occasion, until the tune became an obsession. This led to a practical joke at the Castle which caused much amusement. One morning, speaking of the Jubilee craze, I pretended that I had received as an advertisement a “Jubilee bustle” which would play “God save the Queen ” when the wearer sat down. This, of course, created much curiosity and laughter. Having promised to put it on, I took my host into my confidence. An aide-de-camp was pressed into the service, and armed with a small musical-box was made to hide under a particular arm-chair. While the company was at luncheon I retired to don the so-called “Jubilee wonder,” and when they were all assembled I marched in solemnly and slowly sat down on the arm-chair where the poor aide-decamp was hiding his cramped limbs. To the delight and astonishment of everyone the National Anthem was heard gently tinkling forth. Every time I rose it stopped; every time I sat down it began again. I still laugh when I think of it and of the startled faces about me. Reminiscences of Lady Randolph Churchill 1908

At New Orleans last week a hundred to one shot horse named Bustle ran last. Foolish people who bet on him should have remembered that bustles are always supposed to come in behind. Daily Record-Miner [Juneau, AK] 13 December 13 1907: p. 2

And, finally, a thrilling episode in the history of wardrobe malfunctions.

The following incident was related to us the other day, by one whose veracity is unquestioned, and was almost an eye witness to the fact. It is more appalling than we have ever read in the history of these terrible reptiles.

Sometime last summer, the inhabitants of Manchester, Mississippi, gave a barbecue which was attended by the beauty and fashion of the town and surrounding country. It happened, that among the guests there was a young lady, Miss. M., recently from one of the eastern cities, who was on a visit to her relations in the neighbourhood of the town. Miss M. was a gay and extremely fashionable young lady, and withal possessed an uncommon share of spirit and courage except in the matter of snakes—and of these she had so great a dread that she scarcely dared to walk anywhere except in the most frequented places for fear of encountering them. Every effort was used, but without avail, to rid her of her childish fears. They haunted her continually, until at last it became the settled conviction of her mind that she was destined to fall a victim to the fangs of a rattlesnake. The sequel will show how soon her terrible presentiment was fulfilled.

Towards the close of the day while scores of fairy feet were keeping time in the dance to the merry music, and the whole company were in the full tide of enjoyment, a scream was heard from Miss M. followed by the most agonizing cries for help. The crowd gathered around her instantly, the perfect image of despair with her hands grasping a portion of her dress with the tenacity of a vice. It was some time before she could be rendered sufficiently calm to tell the cause of her alarm, and then they gathered from her broken explanations that she was grasping the head of a snake among the folds of her dress, and dreaded to let go her hold for fear of receiving the fatal blow! This intelligence caused many to shrink from her, but the most of the ladies, to their honor be it told, remained with her in her direful extremity. They besought her not to relax her hold, as her safety depended upon it, until someone could be found who had the courage to seize and remove the terrible animal. There was none of the ladies who had the courage to perform the act, and the condition of Miss M. was becoming more critical every moment. It was evident that her strength was failing fast, and that she could not maintain her hold many minutes longer.

A hasty consultation among the calmest of the ladies present were held, when it was determined that Dr. Tisan, who was present should be called to their assistance. He was quickly on the spot, and being a man of uncommon courage, he was not many moments within the circle of weeping and half fainting females, until he had caught the tail of the snake and wound firmly round his hand to make sure of his hold. He then told Miss M. that she must let go the moment he jerked it away and to make the act as instantaneously as possible, he told her that he would pronounce the worlds one, two, three, and the moment the last word was pronounced, she must let go her hold, and he doubted not that he could withdraw the snake before it could make the strike. All stood in breathless horror, awaiting the act of life or death, and at the moment the word three was pronounced, the Doctor jerked out the largest and most diabolical bustle that was ever seen in Mississippi! The whole affair was at once explained. The fastenings of the machine had become loose during the dancing, and it has shifted its position in such a way that it dangled about the lady’s legs, and induced the belief that it was a snake with an enormous head!

The Doctor fell right down in his tracks, and fainted—he did.

I’ll be taking a break on Thursday, Thanksgiving, to make devilled eggs for 2 million, but will return on Saturday, no doubt with a post on something grewsome.

If you are interested in costume history or material culture, you might enjoy my other blog, Mrsdaffodildigresses.wordpress.com. Mrs Daffodil invites you to join her on the curiously named “Face-book,” where you will find a feast of fashion hints, fads and fancies, and historical anecdotes