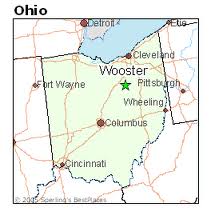 I am in the throes of the Big Push for The Ghost Wore Black: Ghastly Tales from the Past and said throes are cutting into my sleep. So in the interests of time, today I’m going to revisit a story from The Face in the Window: Haunting Ohio Tales. There you will find a much fuller account of an entity labeled “IT” by those it tormented, in a chapter called “A Family Bewitched: The Hoffman Poltergeist of Wooster.”

I like to think that I’m pretty well up on the literature of poltergeists. Slashing polts like the ones you will read about below are found as least as early as the 15th century. It is puzzling, if you believe that all poltergeist activities are merely pranks caused by mischievous teenaged girls, how their activities follow the same patterns, remaining unchanged over the centuries. Personally, I think polts are a form of spontaneous PK arising from trauma and repression. Polt vectors are likely to be frustrated, angry, or even abused individuals, who feel that they have no choices and cannot solve the problems they face.  Hormonal shifts seem to play a role, whether in puberty, menstruation, or menopause. Dissociative behavior is often part of the picture. What the mechanism is, I haven’t an earthly….

As I outlined in another chapter in FITW, “Rock, Fire, and Scissors: The Mysterious Poltergeist,” poltergeists often have specialities. There are the garden-variety ones who throw household items and rap on walls; there are ones who materialize water; there are the stone-throwing devils or lithobolia; incendiary poltergeists like the tragic Minnie Merkle in “Haunted by Fire: A Fire-Spook in Springfield,” from FITW. Lastly, there are the slashing poltergeists who shred clothing and other textiles in what feels like a very personal, intimate attack. While IT did many things to the unhappy Hoffman family, its attack on their wardrobes was one of the most interesting (and distressing) features of the case. Here is a representative article about IT’s depredations.

There have recently been doings in Wayne County, Ohio (reports the New York Times), as marvellous as any that ever frightened Cotton Mather, or mystified Dr. Johnson. In the little city of Wooster there lives a quiet and respectable family, named Hoffman, which for nearly two years has been haunted and tortured by malignant spirits. The persistent demons cannot be entreated or exorcised away; and their proceedings bear a like close resemblance to those of divers familiar imps conjured up by modern spiritualists, and to those of the famous Cock Lane ghost of a century ago.

The mysterious pranks that afflict the Hoffman family were begun in June 1869, while the family lived in Millersburg, Holmes   County, Ohio. At that date, by way of keynote or prologue to the weird drama to come, Mr. Hoffman one day lost two dollars from his purse. He did not at first attribute this to any Satanic or supernatural agency, although he felt subsequently called on to do so. Prudently resolving to hide his money more carefully in future, he went his way. But put his loose cash where he might, the cunning depredator spied it out and relieved him of it. The poor man soon found that it was absolutely impossible to keep any funds about him at all; and this was only the beginning of his woes. Articles of food and of dress began to disappear in the same unaccountable way. Crockery fell from shelves without the aid of human hands, and was smashed to pieces. Stones, eggs, and other small objects were tossed wildly about the house; and now and then the unseen tricksters got up a little shower of gravel and sand, which would be playfully thrown in the faces of the inmates.

The family were at first very naturally surprised and annoyed; afterwards they got alarmed, and having unsuccessfully tried every means that occurred to them, both to discover the cause of these visitations and to put a stop to them, they resolved to quit their home. Mr. Hoffman took another house for his wife and three children—the latter being aged twenty-seventeen, and fifteen respectively—in the town of Wooster, at some distance from their former abode; while, with the discretion that appears to characterise him, he took up his own temporary quarters at a mill where he was employed. The family now hoped to remain unmolested; but they soon found to their chagrin how trivial were the impediments of space or locality to their malefic attendants. The prudent Hoffman, indeed, escaped further attentions; but his spouse was less fortunate. That lady and her offspring being domiciled at the house of one Snooks, in West Liberty Street, Wooster, now became the victims of an extraordinary series of persecutions. The clothes of the mother and eldest daughter were first abstracted and then returned in fragments, having been cut and slashed to pieces. Sometimes the garments would be stuffed in out-of-the-way places. One day, for example, most of the linen of the family was discovered carefully packed in the mouth of the cellar drain. Another time a silk dress was found under a wood pile; and skirts were dug up that had been deliberately buried in earth or sand.

A fresh feature was now added to the entertainment, in the shape of notes that arrived, none knew from whence, although they sometimes appeared to be thrown form the cellar. These missives contained various threats and admonitions. One of the number advised Mrs. Hoffman, in a friendly way, that if she would come down the cellar stairs backward on her knees, at a specified day and hour, she would find a box containing 2,000 dollars. The worthy lady was anxious to clutch the glittering prize, but “being afraid of bodily injury, was dissuaded by neighbours from making the hazardous attempt.” It occurred to her, not unreasonably, that the task might be more wisely undertaken by her husband; and she therefore repaired to that cautious person at his mill, and induced him to go with her to Wooster. The spirits, however at this juncture, promptly transmitted another note to the effect that no one could possibly get the money but herself; and we are not surprised to hear by the latest accounts that it has not yet been secured. By way of amends for this disappointment, the concealed powers have begun a new and lively round of diversions. Poundings are heard on the walls at night, stones from the size of pebbles to that of a man’s fist are pitched through the doors and windows, dishes rattled, and “a general rumpus is created, as if imps were holding high revelry.” A bold young man, a visitor, having said something disrespectful of the unseen agencies, a red-hot stone was dropped on his head, and on taking out his pocket-handkerchief, he found it was cut into shreds. All sorts of mystifications are practised. Mr. Hoffman, for instance, answered one of the “spirit notes,” and put his reply in the cellar; but just as he got upstairs into the room above, “his own note dropped on the floor by his side—all his family being present.”

The family are now quite impoverished by the thefts and other ravages of their demoniac tormentors. Mrs. Hoffman and her daughters have no clothes save those worn by them daily on their backs; while the husband and father has only a single worn old working suit left to him. Nearly all the domestic utensils, such as plates, cups, and saucers, and even the table cutlery, have been either broken or carried away. Of course the obvious suggestion is that all this mischief has really been wrought by cunning mortals, and not by spirits at all, and that, as with the artful William Parson and his family in 1761, discovery, if long averted, must be certain at last. The local press declares that most careful watch has been kept, and that hundreds of men and women have visited and inspected the premises without being able to suggest any clue to the mystery. Several clergymen and physicians have investigated it, and a circle of professed spiritualists have likewise essayed to do so. As yet no light whatever has been thrown on the matter, and, so far as the postponement of detection goes, this Ohio ghost must certainly be allowed to surpass in cunning his predecessor of Cock Lane, who so marvellously perplexed the wise heads of last century. The Week’s News [London, England] 20 May, 1871: p. 628

The Cock-Lane Ghost was the talk of 1762 London. Although the manifestations were of a poltergeist type, they were attributed to the ghost of the restless spirit of “Scratching Fanny,” a former resident of the house. She rapped out that she had been murdered by her husband. He denied it and claimed that someone was trying to extort money from him. The case was investigated by Dr. Samuel Johnson himself. Spoiler Alert: A 12-year-old girl was responsible. You can read more about the story in Dr. Johnson’s account in The Gentleman’s Magazine for 1763, or in Cock Lane and Common Sense, Andrew Lang, 1894. “Cock-Lane Ghost” was used in the 19th century papers as shorthand for any sensational ghost story, perhaps as we might say, “It was a real Amityville Horror case,” or “The place was like something out of The Shining.”

As with so many poltergeist cases, this one doesn’t really have a satisfactory ending, where, after an exorcism, the torment stops; a teenaged girl is caught red-handing throwing something; or an enemy is discovered trying to drive the family out of a property for reasons of malice or greed.

After the Hoffman family left Wooster, they went to Akron where the family seemed to shatter. Mrs. Hoffman, who had been told by some mediums that she herself had the Power, and her son, Jacob, lived in an apartment while Mr. Hoffman worked as a teamster and lived in a boarding house a few blocks away.  Husband and wife did not divorce, but they never lived together again. I have theorized that Mrs. Hoffman, at a hormonally difficult time of life, might have been the poltergeist vector.  Many of the stories about this case stress how Mr. Hoffman was left unscathed–until his wife begged him to move to Wooster and “protect” them and help her get the money she thought was in the basement.

Given the information I have, it’s not possible to prove who was responsible. If you just look at the case in a symbolic way, it becomes still more baffling. Food, clothing, and money were the targets–everything essential for life.  But what was the motive? Someone was furiously angry: stealing money and food and chopping up the family’s clothing—its second skin, as it were–was a highly aggressive and personal attack. I don’t have any answers. I can only suggest that IT ultimately destroyed the family as thoroughly as it shredded their clothing and possessions.

If anyone has any information about what happened to the family after they moved to Akron, put a spirit note in the cellar or send to Chriswoodyard8 AT gmail DOT com.