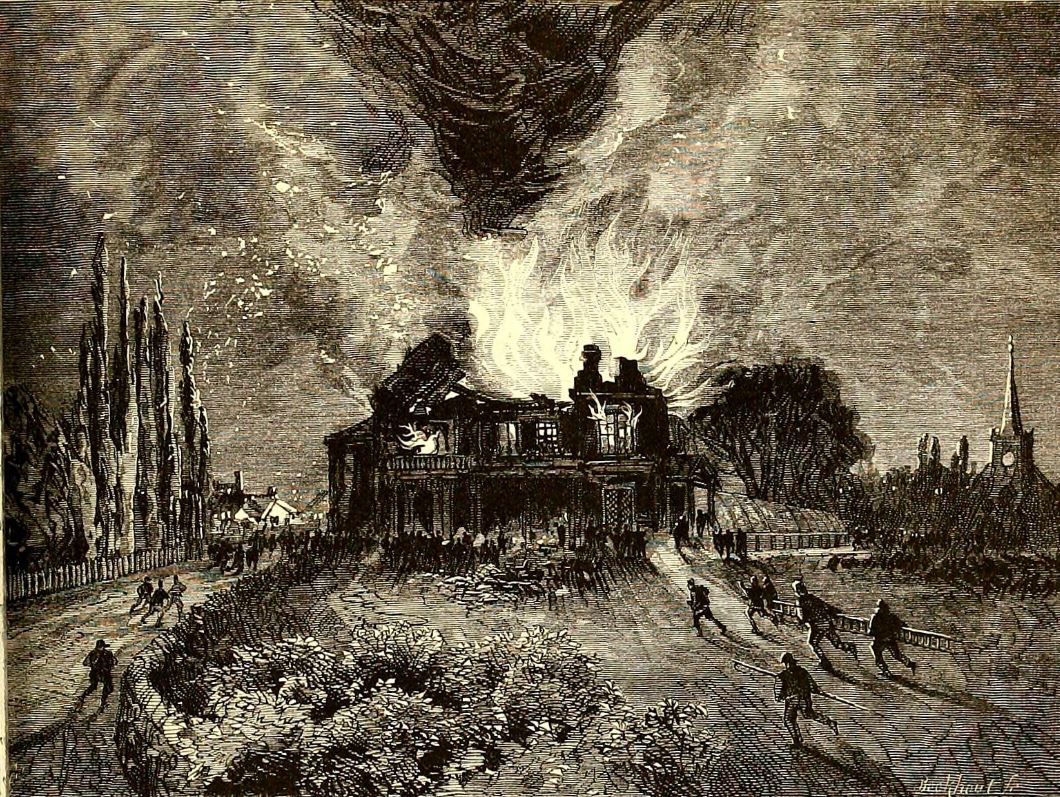 I’ve always had an affinity for phantom structures, possibly because I sometimes see them myself: a railroad trestle near River Styx, Ohio, for instance, or, memorably, a phantom barn behind a house in Dayton (see Haunted Ohio III for details). If they light up, so much the better!  I’ve also written about the phantom log house of Fort Amanda (Haunted Ohio IV: Restless Spirits), which has lights in the windows, as if inhabited.  When approached, the lights wink out, as does the house.  An apparently solid house has also been seen at Sugarcreek Reserve in the early 1990s with lamplight shining through its windows. Another was seen in the 1950s on the side-lawn of the United Methodist Church in Crown City, Lawrence County. When approached, these houses simply melted away.

Buildings that appear to be on fire are not uncommon in the paranormal literature and it is a cliche that lights are sometimes seen in structures, even when the electricity is cut off.  But what can we make of this remarkable tale?

LIGHTS ON THE MOHAWK

The Amsterdam Mystery Paralleled by an Incident Many Years Ago.

Apropos of the mysterious light which has recently appeared on the railroad track at Amsterdam, N.Y., and has aroused the superstitious fears of the engineers and brakemen who have seen it, an editorial writer in the Rochester Democrat and Chronicle says:

“Peculiar lights, not satisfactorily explained, have been seen in the vicinity of Amsterdam on former occasions, and by those who had no apprehension that an evil spirit appeared to lead the beholders astray. More than forty years ago a very singular light was seen some miles north of Amsterdam by two young men, and under circumstances that precluded the idea that they merely imagined that they saw something. The writer has heard the incident repeatedly related by both witnesses, one of whom a few days ago repeated his experience, on seeing the statement about the lights, which are purported to have been seen near Amsterdam. In the early part of March, 1839, two young men, residing five or six miles northwest of Amsterdam, just on the borders of Fulton County, concluded to visit Troy. The sleighing was good at the time, and they started for the farm house where they boarded very early in the morning, as they wished to reach their destination as early in the day as practicable. They left their residence no later than 2 o’clock in the morning. When they had driven about a mile in the direction of Amsterdam a light was seen in the distance. As seen dimly through the tops of intervening trees, one of the parties remarked it looked like the moon just rising, and then immediately said: ‘It cannot be the moon, for it is too far south for the moon, and more than that, no moon rises now at this time of the night.’ [Editor: “That’s no moon….“] As they drove on, seeing the light occasionally, though not constantly, the conclusion was that some building was on fire, either in Amsterdam or Schenectady, as they were traveling in the direction of both towns.

“For more than two miles the light was seen at intervals, at times hidden by intervening timber or a rise in the ground. As they entered a piece of woods of perhaps forty rods in extent along the road the light was invisible. When they emerged from the timber they were astonished at what they beheld. Not more than twelve rods ahead of them they saw apparently a log house on fire. Something like a large tub was directly in the middle of the road all ablaze, and burning furniture was strewn all the way from the middle of the road to the building wrapped in flames. On seeing the fire one of the persons said, ‘Drive fast, we may be of assistance to the family!’ the drive struck the spirited horse a smart blow with his whip and the horse sprang forward with a bound, throwing the snow sharply in the faces of the persons in the cutter. They leaned forward for a moment to protect their faces from the snow-balls, and, on looking up, no fire, no burning building were to be seen. The driver reined in his horse, and the young men gazed at each other and then at the locality, where they had seen the building on fire. ‘What does this mean?’ said one. ‘I don’t know,” was the reply. There was no building of any kind in sight. There was a rail fence along the side of the road where the building had appeared, and the ground by the side of the road was covered by snow, undisturbed by any track of man or beast.

“The young men drove past the spot of the imaginary fire, stopped and investigated, but made no discovery. They were not ghost seers, nor believers in the theory that ‘ghosts walk the earth both when we sleep and when we wake.’ They were not frightened. They had not been at a ‘wake’ nor any other gathering where inward excitement might be produced. They started from the residence of a staid Dutch farmer, and were staid young men. But from that March night in 1839 to the present time, says one of the witnesses, the mystery of the apparently burning house has not been solved.”

The mysterious light referred to above is this one, with the hint of a ghostly trainman holding a lantern as he walks the tracks:

Amsterdam, N.Y., Aug. 14. A mysterious light appears nightly about three feet above the railroad track at Palatine Bridge, and some declare that a human hand has been seen above it. Night Watchmen Barrett and Lynneman are among the reliable persons who have seen it. Last night 50 citizens hid behind a fence in hopes of ferreting out the mystery, but the light did not appear. Sometimes it goes bounding down the track, at others it is 30 feet in the air, and again, it seems to be lying on the track. Several trains have been stopped by it, the engineer mistaking it for a signal light, and railroad men are full of apprehension and superstition. Much excitement prevails. The New York Times 15 August 1883: p. 1

Is there a history of mysterious lights near Amsterdam? Are the two stories connected in any way? Frankly, I doubt it. Spook lights routinely roll, bound, and lurk around rail lines. The 1883 report seems a convenient hook on which to hang a thrilling story with unnamed witnesses. I’ve looked, and found this squib:

A mysterious light was seen in the vicinity of Tuckahoe, North’d Co., last night. It had the appearance of a burning building. Lewisburg [PA] Chronicle 6 November 1879: p. 3

but haven’t yet found a corresponding story from March, 1839. Except for the specificity of house, tub, and blazing furniture, there is a flicker of the mischievous will-o’-the-wisp, flaring up to alarm and confound travellers. But then, spook lights have a reputation as shape-shifters….

More information on the Amsterdam mystery or other incendiary illusions? Enlighten me at chriswoodyard8 AT gmail.com.

This story will appear in an as-yet-unnamed sequel to The Ghost Wore Black.