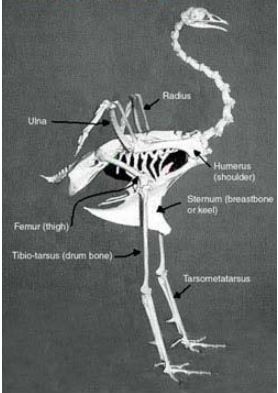 The Gobblers’ll Git You, If You Don’t Watch Out! A skeletal gobbler.

Turkey Day is almost at our throats, like one of those murderous fowls I wrote about in a previous Thanksgiving post, “Tales of Terrible Turkeys.” Instead of moaning about the groaning board or issuing warnings about deadly and demoralizing holiday pies, today we look at ghostly gobblers and a turkey who was a messenger of death.

The holiday’s signature bird is a rara avis in terms of apparitions. The most commonly reported ghostly turkey story from haunted England is a somewhat peripheral one of a monk, killed for a sexual indiscretion, who gobbles like a turkey in Turkey Cock Lane, Rye.

Another gobbling ghost, or perhaps a poultry-geist, was this entity from Epworth Rectory.

The first time Robin Brown, my father’s man, heard it, was when he was fetching down some corn from the garrets. Something knocked on a door just by him, which made him run away downstairs. From that time it used frequently to visit him in bed, walking up the garret stairs, and in the garrets, like a man in jack-boots, with a nightgown trailing after him, then lifting up his latch and making it jar, and making presently a noise in his room like the gobbling of a turkey-cock, then stumbling over his boots or shoes by the bedside. He was resolved once to be too hard for it, and so took a large mastiff we had just got to bed with him, and left his shoes and boots below stairs; but he might as well have spared his labour, for it was exactly the same thing whether any were there or no. The same sound was heard as if there had been forty pairs. The Epworth Phenomena: To which are appended certain Psychic Experiences recorded by John Wesley in the pages of his Journal, collated by Dudley Wright, 1920, p. 51-52

The creatures were frequently mistaken for ghosts when they haunted churchyards.

A short time ago some persons had been frightened by a ghost said to appear in Hampstead Norreys Churchyard. It was reported slowly to raise its head to a gigantic height, make some unearthly noises, and then quickly disappear. At length, on investigation, the ghost proved to be a large white Turkey Cock that had taken to roosting on a white tombstone. On the approach of any one he had raised himself from his sleep, and with gobbling and flapping of wings had vanished behind his resting-place. A Glossary of Berkshire Words and Phrases, Vol. 41, Barzillai Lowsley, 1888: p. 25

And a little girl in Wales mistook a fowl for a fae.

The inmates of H___dd, an upland farm-house in the mountainous district close to the foot of the Snowdon, were thrown into much confusion by the entrance of a little girl in a state of great alarm. She had seen, on the other side of a low wall, the king of the fairies (Brehin Twlwyth Teg) and he had spoken to her. This district had in former days been much frequented by these little people. An old woman, who was sitting on a bench in the chimney corner, asked the girl to describe the stranger—‘He had a red cap on, and his nose was red, thin, crooked, and very long; he had on a tippet like those worn by some young ladies going to the top of Snowdon in the summer. She did not see his feet. She could not understand what he said, but he certainly did speak, and he shook his head at her when he did so.’ Just at this time, “Throll, throll, throll’ announced that his fairy Majesty was at the door. The old woman declared the language to be identical with that used by the fairy which had vanished about fifty-five years ago on being unintentionally touched with a bit of the bridle by her father near Clogwyn Coch. Fairies, she said, could not bear to be touched with iron. Just at this time, to the great consternation of the family, after another ‘Throll, throll, throll’ speech, the door opened, and in walked a neighboring farmer, followed by, instead of fairy royalty—a fine turkey-cock! None of these birds are reared or kept within many miles of this farm, and no clue has been obtained as to where the strange visitor came from. Carnarvon Herald. Worcester [MA] Palladium 17 June 1846: p. 1

In this unique case, the official business of the Royal Mail was stymied by a fowl apparition:

Superstition rarely stands in the way of the extension of postal accommodation or convenience; but a case of the kind recently occurred in the west of Ireland. Application was made for the erection of a wall letter-box, and authority had been granted for setting it up; but when arrangements came to be made for providing for the collection of letters, no one could be found to undertake the duty, in consequence of a general belief among the poorer people in the neighbourhood that, at that particular spot, “a ghost went out nightly on parade.” The ghost was stated to be a large white turkey without a head. Twenty-Second Report of the Postmaster General on the Post Office, London, England, 1876, p. 9

But in the annals of ghostly turkeys, this one kicks the stuffing out of all the rest.

A most bizarre apparition was reported in a West Country newspaper in a letter from Mr Edgar T. Bond following a paper of mine in 1957. It concerned a friend of Mr Bond’s, referred to as ‘John’, a retired detective-inspector of the Metropolitan Police who was formerly a guard to the Royal Family. He was thus a trained observer and not subject to nervous hallucinations. He lived in a cottage near St Austell alone with his housekeeper, ‘Mrs C.’ The cottage had a Victorian wing added, with a drawing room and a sash window which came to within a foot of the ground and overlooked the garden path. Mrs. C. had an aunt who lived up-country, and this aunt had a curious obsession. Several times she was known to say: ‘You will always know when I die, because I shall appear to you in the form of a white turkey.’ Eventually she became ill and Mrs C. had to rush to her, leaving John alone.

That same evening, about dusk, John had settled down in his own little sitting room in the old part of the house with his pipe and the morning paper, when suddenly he became conscious of a faint sound: tap-tap-tap! He sat up and listened. The house was very quiet, and for a while, nothing broke the stillness save the tick of the old grandfather clock. Then he heard it again, apparently from the direction of the drawing-room: tap-tap-tap.

He proceeded to investigate. A powerful man and an ex-policeman to boot, John was not given to nerves, but when he reached the drawing-room even he confessed, later, to being a bit startled. Standing on the path outside the big sash window, and solemnly pecking at the glass with its beak, was a large white turkey.

For a moment he was so surprised that he could only stand and stare at it. Then, retracing his steps, he went out of the front door into the garden. There was the bird, sure enough, about twenty feet away and still pecking at the window pen; but as he moved slowly towards it, it made off across the lawn and disappeared into the bushes beyond, beyond which was a stone wall four feet high.

John followed it at once, quite confident he would have no difficulty in catching it, but although he searched around everywhere until dark he neither saw nor heard any further sign of it. From the moment it entered the bushes it vanished completely.

The next morning he made enquiries in the village as to whether anyone else had seen it, but without result. Apparently no one in the neighbourhood, in those days, kept turkeys at all, let alone white turkeys.

Shortly afterwards he had a letter from Mrs C. to say she had arrived just in time, as her aunt had died that same evening. When she returned to St Austell and they compared notes they found that the actual time of the old lady’s death was approximately the same as that at which the white turkey had appeared at John’s cottage.

John was convinced at the time that it was an ordinary bird, and so it may have been. In the article which prompted Mr Bond to write his account, I had stated my conviction that many animal ghosts are real flesh-and-blood creatures which on rare occasions can be drawn involuntarily into the vortex of certain human situations and so act the part of ‘ghosts’. The Fate of the Dead, Theo Brown, pp. 75-76

A fascinating thought, that last observation…

Other ghostly gobblers? chriswoodyard8 AT gmail.com who wishes all who celebrate it, a Happy Thanksgiving!

Well. I was pluming myself on knowing most of the English turkey ghosts, but must bow to this astounding collection of turkey horrors from Ireland by Dr Beachcombing!

Brian C. sends the best from the British tabloids– Sunday Sport, 1991:  Thanks, Brian!