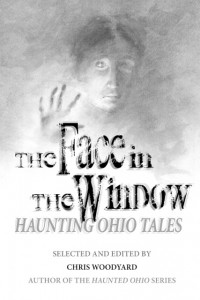 Kestrel Publications is terrified to announce publication of The Face in the Window: Haunting Ohio Tales, a new collection from Ohio ghostwriter Chris Woodyard.

Have you ever heard of the spectral faces in the windows of Sandusky and Milan? The skeletal ghost photographed at Bucyrus? The clothes-shredding Wooster Poltergeist?  A cat named Death at a Cincinnati hospital? The deadly Woman in Black of Dayton?

If not, that’s because these strange tales have been long buried in the archives of Ohio’s newspapers.

“These stories were written by the Dead,” says Chris Woodyard, author of the 7-volume Haunted Ohio series. “Many of these accounts haven’t seen the light of day since they were first published.  They’ve been resurrected from the aptly named newspaper morgues.”

Drawing on newspaper archives, antique books and journals, and county histories, Woodyard has unearthed a treasure trove of all-new tales that should find favor with fans of ghost stories, Ohio history buffs, and steampunk aficionados alike.

“Although I’ve done some editing and added notes, these are presented as the original newspapers printed them, often with a striking lack of political correctness,” says Woodyard. “Some of the reporting is quite heartless and gory, particularly in coverage of murders and suicides.

“One thing that struck me is how modern some of the stories are: ghost hunters stake out a house and one photographs a ghost. Poltergeists throw things and bang on walls, just as they are said to do today. A young woman goes ghost hunting in a cemetery, then drops dead. Faces appear mysteriously on window panes—just like people in Florida saw the image of the Virgin in a window several years ago. There is even a fire-starter whose story is very similar to recent news reports from the UAE about children mysteriously starting fires.”

“I was able to uncover some fascinating tales, like the father and son who are said to haunt a Toledo Bridge and who hung themselves with the same rope.  Or Minnie, the Fire-Spook of Springfield.  And the Coshocton woman who was tormented by the spirit of her dead husband because she had promised him at his death-bed that she would not marry her lover.  When she quickly broke that promise, her dead husband began to appear to her and their children.”

The Face in the Window is the first in Woodyard’s new “Ghosts of the Past” series. The next volume, out before Christmas, is titled The Headless Horror: Strange and Ghostly Ohio Tales.

“The Face in the Window is a Victorian scrapbook of hauntings and horrors,” said Woodyard. “It’s a time-machine that takes you back, not to some Disney version of the 19th century, but to the bad old days of a very haunted Ohio.”

THE FACE IN THE WINDOW: Haunting Ohio Tales

Features:  bibliography, sources, general index, index of stories by county.  ALL NEW stories. First in The Ghosts of the Past series.

How to Order: 1) visit www.hauntedohiobooks.com. 2) find trade paperbacks or e-books at Amazon and Barnes & Noble online.

The Face in the Window includes:

*a snapshot of a ghostly skeleton

*the deadly Woman in Black of Dayton

*the snake who swallowed the peddler

*and many more, all-new tales of Ohio ghosts and hauntings.

Introduction – A Scrapbook of Victorian Horrors

1.      Snapshot of a Ghost: Spirit Photos, Women in White, and Haunted Bridges

5.      The Death-Bed Promise: Revenge Beyond the Grave in Coshocton

7.      The Awful Fate of a Mercer County Blasphemer: The Pinnacle of Prevaricating Perfection

9.      A Family Bewitched:  The Hoffman Poltergeist of Wooster

11.  The Horrors: Vampires, Madness, and a Haunted Morgue

13.  Haunted by Fire: A Fire-Spook in Springfield

Appendix:  Spook Squibs: Shavings from the Coffin of News