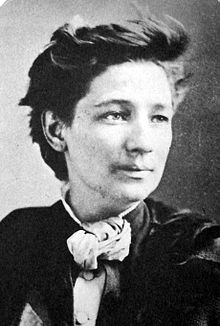 Victoria Claflin Woodhull Martin was one of the Forces of Nature, both of the women’s rights movement and of Spiritualism. The product of an abusive childhood in rural Ohio, she clawed her way through poverty, prostitution, and a series of cruel and exploitive men to be vilified as “Madam Satan” in America for her advocacy of Free Love. Under the guidance of her spirit guide, the Greek orator Demosthenes, she ran for President of the United States and started her own stockbroker agency. Throughout her colorful and extraordinary life, she repeatedly remade herself and ended her life as a wealthy lady of the manor at Bredon’s Norton in the English countryside.

I’ve read quite a bit about Woodhull, but had never encountered the anecdote that appears below in any of her biographies. Woodhull seemed to have few scruples about lying, cheating, or stealing—the doctrines of Free Love allowed her to help herself to any husbands left carelessly lying about, it appears that she lied under oath during her libel suit against the British Museum, and she was sued several times for non-payment of wages by people she hired to work for her. If this episode was true—the lawsuit was widely reported without the details about “cursed” furniture because Woodhull Martin was such a notorious figure–it almost suggests an episode of mania.

Woodhull Martin was known for her erratic behavior and grandiose schemes, some of which actually paid off. She was also known for denying her history, when it suited her, and changing her mind about projects even where others had sacrificed much to help her. Those who lived on her English estate said that she was generous (she founded a short-lived village school, and a Women’s Agricultural College, for example), but that generosity could veer away like the wind when she lost interest or someone offended her. Many biographies about Woodhull Martin emphasize her heroic pioneering efforts for women and her empowerment by Spiritualism. Reading between the lines of a restless, self-centered life, though, there is a trail of human wreckage blithely left behind, collateral damage in Woodhull Martin’s struggle for existence. Her wretched childhood certainly had something to do with it. Perhaps some would say it excuses her actions, but there is a certain sociopathic lack of empathy for others that emerges in the story that follows.

ALL FOR A PHOTOGRAPH

MADE A BURNT OFFERING OF IT.

Now the Niece Sues For the Value of Her Household Goods Which Were Sacrificed and a Deputy Sheriff Sits on the Front Doorstep of Her House.

New York, June 15. Mrs. Victoria Woodhull-Martin, the sister of Lady Cook, nee Tennessee Claflin, and the publisher of The Humanitarian, once more appears before the courts, this time as defendant in a suit brought by her nephew, Dr. Charles Stuart Welles, for $2,700, salary due him as manager of the magazine, and one by Mrs. Welles for the recovery of damages alleged to be due her for the destruction of personal property.

Mrs. Martin, with her husband, John B. Martin, a London banker, and her daughter, Mrs. Lula (Miss Zula) M. Woodhull, had arranged to sail for their English home today, but were prevented from taking any of their personal effects by the attachment served on them by Dr. Welles. They will consequently remain until the matter is settled, Deputy Sheriff Fitch occupying a chair meantime in the front entrance of the house to see that nothing is carried therefrom.

Mrs. Martin positively refused to talk about the affair. She said the case was in the hands of her attorney, Treadwell Cleveland, 52 Wall Street and that anything concerning the matter must come from him. Mr. Cleveland said that he did not know whether the case was in his hands or not. He had heard nothing about it.

Dr. Welles was equally reticent. He said that he could not talk on the subject much as he should like to do so. “I have been hurt enough now in my practice by being connected with this family,” he said. “I cannot allow myself to appear in print in this affair. See my attorney, Mr. Henry Daly, Jr.”

According to Mr. Daly, the Welleses and Mrs. Martin and daughter took the house at 302 West Seventy-Second Street last November, with the intention of running a literary salon and a first-class boarding house.

Scarcely had they got settled there when Mrs. Martin decided that the furniture of the Welleses did not harmonize with the interior finishings, and she ordered it taken out and given away. Mrs. Welles meekly complied with the order on being promised that it would be replaced with furniture more suitable.

Next Mrs. Woodhull-Martin, Mr. Daly says, decided that the personal effects of Mrs. Welles, dresses, wraps, hats, bric-a-brac, and even the doll babies and toys of the Welles children, were surrounded by a curse.

She said that they must be burned, but Mrs. Welles objected on the ground that many of the things were dear to her as keepsakes, being presents from her relatives some of whom were dead. Mrs. Woodhull-Martin carried the day, however, as well as several dozen armfuls of clothing, which she threw into the furnace, while the janitor and servants stood around and wept as they thought of the use they might make of the articles if allowed to have them.

When Mrs. Martin had almost reached the end of the Welles household effects, it is alleged, she espied a trunk in one corner of the room and proceeded to have that follow the other goods. Here, says Mr. Daly, Mrs. Welles entered a serious protest. She said that it contained only some photographs and small presents which could never be replaced. But Mrs. Woodhull-Martin was thoroughly warmed up to her work, and breaking open the trunk, proceeded to examine its contents. Suddenly she ceased her work and held up a photograph.

It was a likeness of Colonel Blood, her former husband, who is said to have died in South Africa some time before she married Banker Martin [actually Blood and Woodhull were divorced; Victoria married Martin in 1883; Blood died in 1885.] She stopped her work and burned no more. Mrs. Welles says, because she had got what she sought. Mrs. Welles also goes to far as to say, through Mr. Daly, that the finding of the photograph was the object Mrs. Martin had in burning her effects, and that the story of the curse on the goods was only an excuse. In her petition she alleges that Mrs. Martin’s promised restitution was never made, and she asked for $2,500 to cover the value of the goods destroyed. The case will come up for hearing before Justice O’Gorman in the Eleventh District Court Thursday next.

Dr. Welles is the son of Henry S. Welles, a contractor, living in Eighty-third Street, who built the Brooklyn waterworks. Dr. Welles has been somewhat prominent in political life having  acted as secretary of the legation in London. [He was also the Vice Presidential Nominee of Belva Ann Lockwood who ran for President in 1881 for the National Equal Rights Party.]

Mrs. Victoria Woodhull-Martin has appeared prominently before the public in this country and England for the past 30 years. She was born in central Ohio, but married early and came to New York with her sister, then Miss Tennie Claflin, in the latter part of the sixties. In 1870, under the style of Woodhull, Claflin & Co., they opened a brokerage office in Wall Street and did a thriving business. Of late years the sisters have been spending most of their time abroad, where both found homes and husbands. Trenton [NJ] Evening Times 15 June 1895: p. 2

Even the children’s toys were burned, except a few that the little ones succeeded in hiding. When she had burned my daughter’s garments, Mrs. Martin burned all the dresses belonging to her dead mother and sister. Her excuse, for this outrageous conduct was that everything belonging to my daughter and to her own dead relatives was cursed.

“’Everything is cursed,’ she said, ‘and I won’t have any cursed property in my house.’ Victoria is superstitious, and really believed what she said.”

My daughter said to her:

“’Now you have burned everything I have except my children, tell me which one you want and I’ll fetch her down and you can throw her into the furnace.’…Mrs. Martin’s mind is slightly affected, I believe. She thinks herself a second Christ.” The New York Times 16 June 1895

The New York Times article gives the explanation that Woodhull-Martin’s daughter, Zula, age 35, who had promised her mother not to marry, had become engaged to a young man in the States. Dr. Welles wrote about the engagement to Mrs. Martin in London. Zula promptly went there and denied any romantic entanglements. Woodhull-Martin then decided to turn the Welleses out of the boarding house they were managing despite the fact that Dr. Welles had given up his practice to work for Woodhull-Martin.

In 1897, her doting English husband John Biddulph Martin died and left her a fortune. She returned to New York to defend the Welles’s lawsuit in February 1898, with grandiose plans to publish The Humanitarian in America and establish a “Temple of Science” to teach “such methods of humanitarian government as shall fit future generations to combat successfully and overcome the financial, mental, moral and physical obstacles that now retard the progress of man.”

She was also planning a course of lectures “based upon her experience and study of humanity during the years of her ideal life with her late husband.” Mrs. Keep, Mrs. Martin’s agent, explained that “Mrs. Martin will advocate government of the propagation of the human race.” [i.e. birth control, a shocking and scandalous topic to be discussed publically. “Ideal life” was a euphemism for good sex. Mrs. Martin still knew what sold.] Minneapolis [MN] Journal 18 February 1898: p. 16

I have not been able to find out how the lawsuit about the cursed furniture was resolved. Any information?  Have Demosthenes give me a call. Chriswoodyard8 AT gmail.com