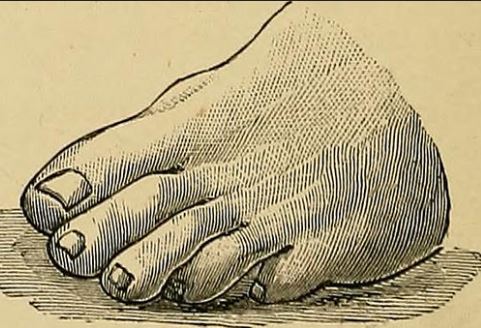 Burying His Toes in the Sand: A Strange Funeral

HE BURIED HIS TOES

A Cure for Corns as Effectual as It Was Novel.

VISIONS THAT WERE REALIZED.

The Miniature Coffin Which Crossed the Atlantic.

A rather extraordinary case of prophetic dreaming, superstition and miraculous healing came to the notice of a Mercury reporter last week, the salient points of which are herewith summarized. Over three years and a half since there arrived on these shores from Jersey, in the Channel Islands, a middle-aged, medium-sized and complexioned gentleman by the name of Sebastian Nelson. He brought with him about fifteen hundred dollars. He was not a communicative individual and required considerable “chivying” before anything like familiarity could be induced. In the Island of Jersey, near the town of St. Aubin’s, he rented a farm, working it as a nursery and garden, sending most of his produce by steamboat to Covent Garden market, London. He had been twelve years married, and occupied a six-roomed cottage on the farm, when the first noteworthy event of his hitherto monotonous life transpired. It was the afternoon of Sunday, June 16, 1872. Dinner was over, and with a pipe in his mouth and a newspaper in his hand he stretched himself on the sofa. Mrs. Nelson was preparing to go to St. Brelade’s Church, a couple of miles off. He thinks he slightly dozed, and that the pipe dropping from his mouth awoke him to the terrible consciousness of

Which now assailed his ears. Glancing apprehensively around, he saw the room was without another occupant. Yet the most dreadful moanings and agonized gaspings seemed to proceed from the centre of the floor. He quickly ran into the kitchen, expecting to find his wife taken suddenly sick there or up-stairs, or one of the farm-hands dying outside. Nobody was visible; he was quite alone. Yet, when he returned to the little parlor, the gasping, stertorious breathing and groaning still continued. For over two hours, he thinks, he heard those depressing manifestations, albeit he had removed and replaced the carpet, and even explored the floor beneath. At the instant, however, that his wife raised the latch of the door on her return from church, about five P.M., the sounds ceased. Mrs. Nelson went to London, a few days after, to visit her sister. When she returned, she was unwell, and twenty-one days after, to an hour, she lay dying in a bed placed in the parlor, uttering the exact moans and other manifestations of anguish of which he had been

By her request she was laid among the scrubby trees that dot the old church-yard of St. Brelade’s—the oldest Christian church in the Channel Islands, and consecrated, it is said, in A.D. 1111.

A few months after his bereavement Sebastian Nelson dreamt on two consecutive nights a most remarkable dream. He thought he beheld a peculiar funeral, in which a single man was sole mourner and bearer; and a tiny coffin, no larger than pistol-case, containing the corpse. The face of the man was never visible; but so far as Nelson could judge, he was of medium size and wore clothes and hat of a kind he had never heretofore seen.

Early in the spring succeeding his wife’s demise Mr. Nelson and one of the farm hands, a big-boned, little-brained young man, were engaged in breaking up for firewood what had formed the “knee” of a ship. In exerting his hand’s strength with a carpenter’s large axe the implement slipped in the amateur bedlamite’s grasp, severing the five toes and a portion of the left foot from his employer. With

Mr. Nelson at once bound a cord tightly around the ankle, and thus lost comparatively little blood, and, mounting the blubbering idiot’s back, was carried into the house, carrying the severed portion of the foot in his hand. The doctor form St. Helier was anxious to amputate the foot above the ankle, but the invalid would not consent, and, in spite of reason or remonstrance, he started by the boat for Southampton, England, and there put himself under care of Dr. Robert Wallis. The member perfectly recovered, and a London operative chiropodist constructed a mechanical contrivance which not only supplied the form, but in a great measure the offices and uses of the toes in locomotion. He wore a boot, and his infirmity was unknown to anybody with the exception of his shoemaker.

It was while sojourning in Southampton that the idea of visiting the United States was formed. His farm had been re-let, his implements of husbandry and furniture sold, and it was necessary to pursue some other calling.

But soon after “bought a place out” in Park street, and became the proud proprietor of a liquor business, where he was making money, until the circumstances now to be described compelled him to “sell out.” Ever since his fractional part of a foot touched Uncle Sam’s soil, it had “pained and pained.” In former and happier times, the toes of this pedal had blossomed with corns, and it had been one of the regular fortnightly agonies of his agrarian life to expose these excruciating toes to the surgical manipulations of the late Mrs. Nelson, who operated on them with an old razor. A quarrel regularly wound up the corn-harvest, and Mr. Nelson thinks that, but for these corns, the blunt razor, and his wife’s rather heroic attempts at dissection, they would have been “one of the most agreeable couples that ever lived.” Well, in the Pearl street store, near John street, at his lodgings, and even in St. Peter’s Church, he felt those absent toes “twanging and wrenching and lacking” just as they used to do at the fortnightly

He had no peace with them day nor night. He would start from his sleep in the night with a tortured notion that the late Mrs. N. was at work with the white-handled razor. When he used to limp and purse up his mouth with agony, his customers would tell him it was the rheumatiz, and advise him to carry a potato in each pocket till they dried. He knew it was not rheumatiz; but he tried the potatoes, carrying them till they were transformed into veritable celluloid, but without any relief.

He consulted at least two surgeons, who explained the pain without relieving it. After amputation, they told him the extremities of the divided nerves occasionally undergo inflammatory action, causing intense pain, which often endures long after the wound has healed, and which appears to the sufferer to have its seat in the severed portion.

The people of the Channel Islands have the reputation of being superstitious. Mr. Nelson was evidently no exception, for having read among astrological advertisements of a remarkable girl that could tell everything from the cradle to the grave, he paid her a visit and a fee, and prepared to listen at her knee with that same ductile receptiveness that Paul may have exemplified when he was a pupil of Gamaliel. Aided by hints of his own, she uttered her wondrous and and “related as wondrous” revelation. The cause of the agony was made as clear as the noon day.

Had been sacrilegiously planted in a common market garden, instead of being decently interred in a churchyard among consecrated earth. If an Angel had descended to him from the summer’s daylight sky with his revelation, he could not have received it with deeper or more abiding faith. He now looked upon the disinterment of his poor toes as the dominant and inspiring duty of his life. Thus it came to pass in the late spring of 1877 he disposed of his business in Pearl street, “at a sacrifice,” and sailed for Southampton and thence to Jersey. The companion of his voyage was a neat casket, constructed by an undertaker in the Bowery. It was silver mounted, and bore an inscription suggested by the remarkable clairvoyant, but which he refused to reveal. When the foot was finally discovered in its candle-box in the garden, it was not a pleasant plaything to handle or to “nose” but he braced up his nerves and placed the toes in their aristocratic satin-lined resting place, screwed down the lid, and stole softly along the sandy lane to the old churchyard of St. Brelade’s.

It was while executing this sacred mission that the remarkable dream received its fulfillment and realization. The casket bore some resemblance to a pistol-case, and his new American spring overcoat and Panama hat completed the perfect

Of the funeral procession in his duplicated dream. Then he knew for a verity that the New York “medium” was a seeress and astrologer like those of “eld.” There were terrible pulsations in the foot as he hurried along to the old unfrequented graveyard to make his surreptitious interment, under the pretence of planting flowers upon his wife’s grave. But when the tingling toes finally rested above her sainted dust under the same grassy mound, “there was,” as he says, “an end on’t.” The pain ceased instanter, and Mr. Nelson knelt upon the turf and murmured his gratitude into the ear of the recording angel, and wiped away a tear.

Something else, moreover, the seeress had told him, but which he had until that summer afternoon held under consideration and conscientious advisement. Seeing things no longer as in a glass darkly, but as it were face to face—or rather back to back—with the individual of his dream, he proceeded up to the Cozziris farm and asked the mature spinster whom he had heretofore “set his eye upon” to become the second Mrs. Nelson and accompany him to “Americy.”  Of course she accepted, and on Thursday, July 19, 1877, there appeared in the St. Helier Gazette, the following interesting announcement;  “Nelson-Cozziris—At St. Saviour’s Church, on the 17th inst., St. Helier, by the Rev. Prideaux G. Finch-Hatten, M. A., Sebastian Nelson, Esq., of New York, United States of American to Louisa Judith, eldest daughter of Ralph Edward Cozziris, Esq., of the Stone Palais.”

The happy pair now occupy a French flat, corner of Ninth avenue and Twenty-second street, and as soon as the present troubles with the excise are over, Mr. Nelson expects to again embark on the liquor business. It is proper to state that his corn harvests are over. The foot has never ached since the funeral.

So much Fortean fun packed into one jocular story! A horrifying aural premonition of death (every woman her own banshee…), a mysterious dream of a small coffin, phantom limb syndrome, and a highly accurate seeress. I’ll add a possibly extraneous note: St. Brélade was originally supposed to be built by an ancient pagan sanctuary on the east of St. Brelade’s Bay, but the workmen found that everything they did during the day was erased during the night and the stones and tools were found at an inland site. It was said that les p’tits faitchieaux lived at the pagan site and moved the stones so that their home would be undisturbed. Perhaps the sandy soil did have some sort of virtue…