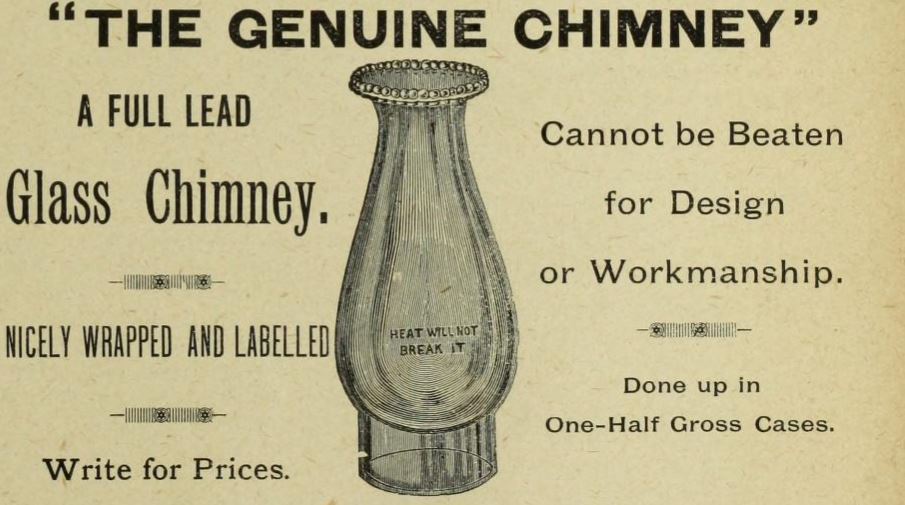 A Christmas Tree on the Chimney Glass lamp chimney, 1892 of the type where the Christmas tree appeared

I’m a sucker for mysterious-pictures-on-the-glass. The Face in the Window: Haunting Ohio Tales, contains a whole chapter telling of faces, mystic and indelible, that appeared on windows all over Ohio in the 19th century. Nearly always the images are faces, said to be etched on the window by lightning or by some spiritual projection. Only occasionally are full human or animal figures seen and, even more rarely, objects. The figures were often called “lightning daguerreotypes,” because of their resemblance to that photographic medium. But in this story, from the 1890s, the daguerreotype was well out of fashion, so the image is described as “mind photography.”

PICTURE ON A LAMP CHIMNEY

A very peculiar case of what is called mind photography has come to light in the residence of Mr. Charles H. Bender at 261 Humphreys street, which is puzzling all the citizens in that neighborhood.

Last night about 6 o’clock Mrs. Bender took an old lamp in the kitchen for the purpose of washing the chimney, which is made of common transparent glass, and has been in use in the family for three years.

The chimney was washed and placed back on the mantelpiece. In a few minutes Mrs. Bender happened to glance at the chimney and was startled to see the perfect imprint of a Christmas tree laden with presents in the glass. It is said the figure is perfect. Mrs. Bender says she had been thinking about Christmas trees during the day.

Mrs. Bender took the chimney down and tried to scrape the figure off, but without success. She then washed it with the same result. The tree is said to be highly colored, and uneraseable. Mrs. Bender states it is impossible for anyone to have changed the chimney without her knowledge, and the sudden appearance of the figure is regarded as a strange thing.

The news spread in the neighborhood and in an hour fully fifty people had assembled in the house gazing at the wonder. A genuine sensation has been created in that neighborhood, and the freak is a matter of much speculation.
The tree is still on the chimney and can be seen at any time.

Like the faces found on windows, the picture cannot be washed off. The colorful nature of the image is unique; I cannot think of another example where the picture on the glass appeared in full color. But, alas, the prodigy was too good to last.

FIGURE ON LAMP CHIMNEY AT BENDER’S HAS VANISHED.

Many People See the Freak and Are Much Mystified Over the Strange Likeness.

Probably one of the most curious forms of psychical phenomena that has ever been seen in this neck of the woods was the perfect and highly colored figure of a Christmas tree which made its sudden appearance on a common lamp chimney, at the home of Mr. Charles H. Bender, 261 Humphries street, on Christmas day.

That the tree really appeared, there can be no doubt. Mr. Bender is one of the oldest and most respected citizens of Atlanta, and his word, as well as that of dozens of reputable people who saw the freak, cannot be gainsaid.

A common glass chimney, without any decorations, has been in this household for twelve years. Last Thursday afternoon Mrs. Bender washed the chimney with soap and water, and placed it back on the lamp ready for duty. This particular lamp did not happen to be used Thursday night, however, consequently just the exact time of the appearance of the phenomena is not known.

Just after dusk Christmas day, Mrs. Bender was in her bedroom, and the lamp was sitting on the mantle. She struck a match, and, taking the chimney off, lighted the wick. When she replaced the chimney she was startled to see the perfect imprint of a Christmas tree indelibly drawn in some mysterious manner on the glass.

She at first thought the scene might be the result of a reflection of light, but was finally convinced such was not the case, and called her husband, when both gazed at the picture in stupefaction. The neighbors were then called in and fully fifty people called at the Bender home that night to witness the tree.

Efforts were made to erase the figures, but without success.

It was perfect and indelible. Those who saw it say the tree was about six inches high; was similar to a spruce; the trunk was perfectly white; the foliage green, and there were numerous small dots of purple tinge over the tree, which were taken to be the presents.

Saturday morning the figure still appeared, and was gazed on by dozens during the day. Saturday night the tree began to fade somewhat, and yesterday morning only the outlines were visible. At noon Mrs. Bender determined to see if it were still indelible, and applied some water, when the figure suddenly vanished and has not returned.

Among the many citizens who state they saw the freak, are Mr. Feutrell, C.M. Smith, T.J. Bevel, Mr. Moore, Mr. Will Kerlin, Mr. Ewald, James Johnson and many others, all well known in that neighborhood.

For several years Mrs. Bender says she has been wanting a Christmas tree at her home on Christmas day. According to her statement yesterday afternoon to a Constitution man, she had almost the very image of the tree that appeared on the chimney in her mind when she was washing the glass the day before Christmas.

This sounds like an early example of what today’s New Age motivational speakers might call “manifesting” or “the law of attraction.” Mrs. Bender wanted a tree; voila! she found one on the lamp chimney. It would, of course, have made an even better story, if she had walked into the parlor and found a fully-dressed Christmas tree with lit candles. I do have to ask, though, why she couldn’t just have a tree on Christmas day. The family was comfortably well-off–what was the problem?

I wondered about the origin of the phrase “mind photography” and suspected that it was coined by the reporter of the tale. In fact, in the summer of 1896, several months before the Christmas tree materialized, the term “mind photography” appeared in hundreds of articles about Dr. Hippolyte Baraduc, an “electro-therapeutist” of Paris and his amazing thought photography.  He was something of a proto-Ted Serios, who believed that he could project not only images, but emotions onto photographic plates. He also was notorious for his claim that he had photographed his wife’s soul leaving her body. So the idea of projecting images onto glass was circulating in the news.

As with so many Fortean tales, the story goes no further. Mrs Bender does not seem to have been interested in ongoing publicity. Other than her funeral announcement, she appeared only once in the papers after the miraculous tree appearance. In 1901 she lost a slander case after accusing a neighbor of stealing a chicken. The woman sued for $5,000 and was awarded $100–a sum that would have bought and trimmed several dozen Christmas trees.

Other Christmas-related images on glass? (For example, at the Church of the Assumption at Canton, Minnesota, Christmas came in August of 1892 when the figure of the Madonna and Child appeared in a circular window.) Full-color, please. Chriswoodyard8 AT gmail.com