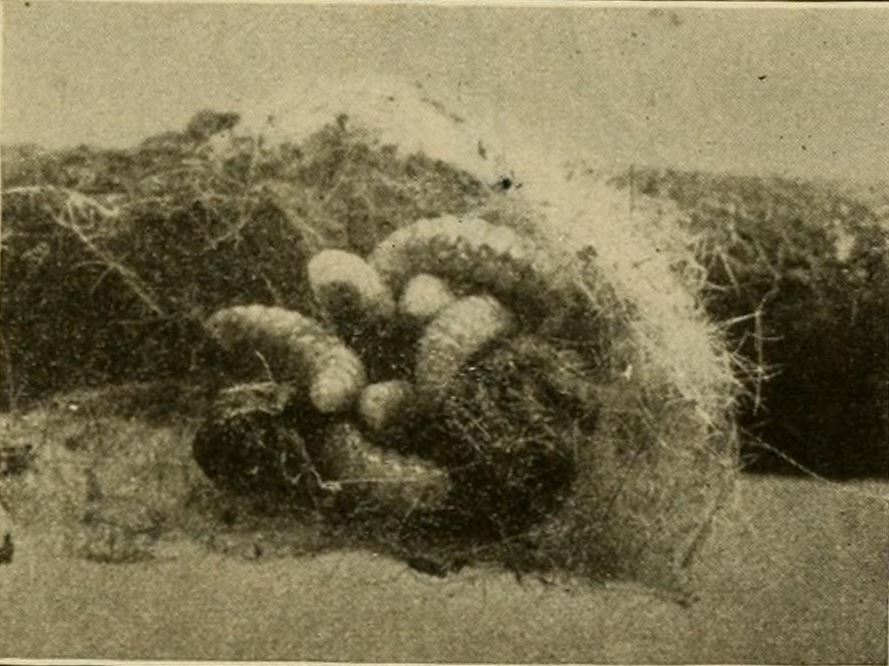 Cloudy, With a Chance of Maggots. Maggots eating a moth in its chrysalis.

Everything old is new again! Normally this would be applied to the fad du jour: an ironic return to aproned wives serving pre-prandial cocktails or lumberjack garb for soft-handed hipsters. Today, however, I’ll use it in a completely non-ironic way to introduce a fall of maggots. This would not be the recent, distressing maggot rain in Colorado, but a nineteenth-century precursor, one of many Fortean falls.

Every Fortean knows of fish-falls; possibly they revel in the odder manifestations of Sargasso Sea overflow: snakes, snails, frogs, meat, or blood. A great many mystery falls are slithery and unsavory, but few can surpass the squeam-factor of

A SHOWER OF MAGGOTS.

A strange phenomenon occurred in this town on the 18th inst., in the form of insects, commonly called “skippers,” falling from a cloud accompanied by rain. The truth of the thing can be substantiated by at least six persons in the vicinity of my residence, whose attention was called to the circumstance by myself. The cloud arose in the west about 1 o’clock, P.M. The general course of Leatherwood creek at this place, and for a mile or two below, is west, so that the cloud in approaching the town touched many parts of the creek. A few minutes before the rain commenced falling here, I heard the noise of a water spout, or what Dr. Lardner terms, I believe, “partial attraction,” about two miles below this, in the direction of the general course of the creek. The character of the noise, I cannot describe; all I can say is it was a peculiar noise, differing entirely from the sound of wind at a distance, or of murmuring thunder. I may very appropriately say of it, what Dr. Laennec [inventor of the stethoscope] says of the peculiarity of sounds in the thorax, in auscultation, “known only to the practised ear.” Now, the only reasonable conclusion I can come to with regard to the manner in which these insects got their elevation in the air, is, that the “water spout” in its course up the creek, had passed over some stagnant ponds, or puddles, in which the dead carcass of some animal had been lying partially covered by water for perhaps months, or at least for such a length of time as was necessary for the generation of maggots, which were drawn up with the surrounding water.

The appearance of the maggots corresponded in every particular with that of the “skipper” found in bacon. [also in cheese.] They varied in length from one-eighth to one-third of an inch; were blunt at the hinder end, sharp at the head, and covered, as far back as the head extended, with short, black, bristly hair. After the shower was over and the sun came out, the heat caused them to double themselves and skip about from place to place, in search of shade. June 22d, 1846.

Dr. Fee records an interesting phenomenon, but one by no means unprecedented in the annals of meteorological science. Many well authenticated instances are on record of animals precipitated from the upper regions to the earth during storms. A few years ago a number of small fish were picked up on one of the roads leading out of Louisville, two miles from the river, whence they had been carried by a gust of wind, the preceding night. We conversed with a gentleman in Jeffersonville, sometime since, who, in a hurricane which swept across the river just above the falls, saw fish going up with the ascending column of water. Frogs have been known to be carried up in a similar manner, and to fall at considerable distances in numbers. In tornadoes it is well known that even heavy bodies, as the branches of trees, are often elevated to great heights, and transported many miles. The surprising circumstance in Dr. Fee’s case is that the storm should have come across the “skippers;” but that hardly equals the Tennessee [Kentucky] wonder, in which the clouds poured down “flesh and blood.” Our friend, Dr. Troost, the distinguished professor of Chemistry and Mineralogy in the University of Nashville, published shortly after this strange occurrence a learned paper on the subject of it, in which he gave an account of a great variety of bodies which have been seen to fall to the earth in different countries and at different periods, having been previously elevated into the air by the force of the winds. We regret that we have mislaid the interesting article and are therefore unable to copy some of its details.

I’m not sure which is more appalling, maggots precipitating from clouds or taken for granted in foodstuffs. Among the many things that have fallen from the skies, maggots seem to be one of the rarer categories. Perhaps they are harder to corral than, say, a school of fish—hidden as they are in flitches of bacon and the bottoms of trash-bins.

In passing, I must remark on the name-game of the magically named “Dr. Fee” (there are hundreds of members of the Fee family listed as buried in Iowa.) and “Leatherwood,” reminiscent of another Fortean figure, the Messianic Leatherwood God.

What about that “peculiar noise” Dr. Fee heard, comparing it to the sounds heard when using a stethoscope?  Perhaps the lub-dub of the heart or the swish of blood in the veins, or maybe it was it like this sound, memorably described in a New York Times review of Unknown Soldiers, by Neil Hanson, about the dead of the Great War:  “Burial parties, searching at night for bodies, could hear maggots feasting on flesh. The sound was like rustling silk.”

I regret being unable to find the interesting article on famous sky-falls by Dr. Troost. And I’d be even more fascinated to locate the details of this British maggot-fall:

12 In the Evening Chronicle of to-day, Mr. William Grieves, of Ashington Colliery, told the story of a shower of “maggots” which he had witnessed at the colliery about a fortnight previously.

The Monthly Chronicle of North-country Lore and Legend September 1887: p. 335

Now, obviously there might be vermin or some other stray animal that died in the depths of the mine and generated the maggots for this Drosophilar drizzle. If so, why would such a shower not be commonplace and why would it rate a mention in what amounted to a 19th-century news of the weird?

One final random thought: fish-falls have entered into popular culture as a Fortean cliché. If we take falling fish in stride, why should we be surprised at falling bait?

If maggots come, can fish be far behind?

If you know anything about the Ashington Colliery maggot shower or where a copy of Dr. Troost’s article can be found online, please let me know at chriswoodyard8 AT gmail.com. I’ll be over here under an umbrella.